Home
Stocks
The Conversation: NBA players effectively went on strike — this new form of athlete activism is more powerful than ‘raising awareness’
Prev Article Next Article
This post was originally published on this site 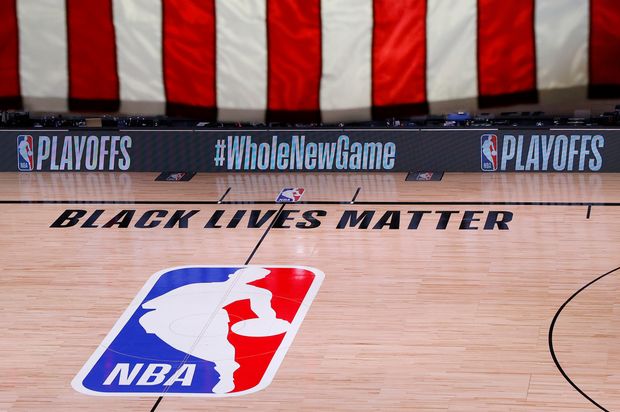 Where’s the game? The Milwaukee Buck boycotted game 5 scheduled for Aug. 26 to protest the shooting of Jacob Blake in Kenosha, Wisc.

The Milwaukee Bucks’ startling refusal to take to the court for their NBA playoff game on Aug. 26 was the most consequential political development in sports over the last 50 years.

In recent years, the prevailing media narrative is that athletes have routinely used their platforms to “raise awareness” or “bring attention” to a social issue.

Awareness, though, has its limits. Rarely does it lead to the kind of structural changes the shooting by police of Jacob Blake in Kenosha, Wisc., seems to demand.

In this case, the players met the moment, marking a fundamental shift in the direction of activism generated by Black athletes. The mass player walkouts that followed the Bucks’ initial protest were no exercise in awareness, though some commentators framed it as that way.

Instead, these athletes were, in effect, going on strike — and showing the world just how much economic leverage they could wield.

When I began studying Black protest speech in sports around 10 years ago, athlete activism appeared to be in decline.

The narrative, however, began to change around 2012, when the Miami Heat posed in hoodies for a widely circulated photograph meant to protest the murder of Trayvon Martin in Florida.

Then, in 2016, Colin Kaepernick took a knee during the anthem to protest police brutality, ultimately becoming the avatar for the activist athlete. By the time the NFL’s biggest stars shot a #BlackLivesMatter video in the summer of 2020 to protest the murder of George Floyd, NFL commissioner Roger Goodell was admitting that “we should have listened earlier,” despite having overseen Kaepernick’s effective banishment three years earlier.

Yet professional athletes’ reliance on Twitter, Instagram and T-shirts often falls short. Yes, they have an enormous platform for political speech and can often use social media to bypass traditional outlets. But thanks to their relationship with sponsors, advertisers and TV networks, professional sports leagues have an even bigger one.

This gives sports executives like Goodell the power to lead from behind, making the athletes’ message their own.

Perhaps the most cynical use of this technique came in 2017, after Donald Trump said that NFL players who kneel during the national anthem ought to be fired. When the Dallas Cowboys expressed their desire to kneel in solidarity, they were joined arm-in-arm by team owner Jerry Jones, a vocal Trump supporter, who agreed to participate – provided that it did not occur during the anthem.

Of course, it is possible for activist athletes to compete with leagues for attention and influence. But this often requires a perilous relationship with corporate power, such as when Nike announced its brand partnership with Kaepernick.

“Believe in something, even if it means sacrificing everything,” read Kaepernick’s Nike ad. This slogan — which could just as easily have been catchphrase for the military or the police — reveals the anesthetizing effects corporate messaging can have on politics. Sure, athletes might appear in ads that mention social justice. But they’re ultimately there to sell products, and often deliver more value to the corporation than they get in return.

Corporate messaging, moreover, depends not on moral imperatives, but on prevailing public sentiment and shareholder interest. The marketplace provides no guarantee that a company changing its Twitter avatar to say “Black Lives Matter” will always be more profitable than staying silent or doing the opposite.

Furthermore, it is impossible, by definition, for corporations to send anti-corporate messages. For these reasons, athlete activism’s relationship to corporate power is inherently fragile.

From talk to action

The work stoppage in professional sports is the most significant moment of athlete activism in a half century not because it “raised awareness” or “started a conversation,” but because it exercised labor’s most elemental form of political power: the strike.

By walking out, professional athletes leveraged their power to exploit, as sociologist Harry Edwards wrote in 1969, “the white man’s economic and almost religious involvement in athletics.”

After a summer of racist police violence and nationwide protest, the shooting of Jacob Blake in Kenosha forced athletes to confront persuasion’s futility and embrace their capacity for leverage. T-shirts and television commercials do not yield phone calls with attorneys general and lieutenant governors, but strikes do.

The same point was made most forcefully in 2015, when football players at the University of Missouri got their university president fired within 36 hours of announcing a strike for racial justice.

As major media organizations framed the walk-off as a “boycott” and leagues announced that games had been “postponed,” these descriptors hid the threat striking athletes pose to sport’s economic health and racial order. In a vivid demonstration of worker agency, Black athletes refused to entertain audiences and make money for the wealthy owners of their teams.

This, they were saying, was not a conflict to be resolved through “listening.” It would require direct economic pressure.

It is tempting to view the walkout’s spread through baseball, football, soccer, and even tennis as an expansion of the activist athlete’s platform. But maybe we should view it as the emergence of interdependent workers’ collectives. After suspending the season in March, the NBA decided in July to resume play in Orlando at a Disney complex where all participants would undergo regular virus testing and live together under quarantine.

The “bubble” in Orlando was designed to protect the league’s assets from COVID-19. But what if, instead, the players’ forced proximity to each other ended up cultivating a radical consciousness and facilitating a spirit of worker resistance?

Where the athlete strike goes next is not entirely clear. The NBA has announced that games will resume, and the NFL and NFL Players Association issued a joint statement indicating their intention to “use our collective platform to call out racism and injustice whenever and wherever it occurs.”

The statement is a reminder that when corporate power seeks common cause with labor, the result is almost always “difficult conversations about these issues.” Corporations love conversations. They reduce politics to speech and forestall the pace of meaningful social change.

However, sports organizations tend to move more quickly when their workers refuse to play.

In a polarized political environment under a president keen to stoke racial division, I see attempts at moral persuasion as teardrops in a poisoned well. What began with the Milwaukee Bucks in Orlando signals a new form of athlete activism not because the platform is growing or the arguments are becoming more convincing, but because it eschews the trappings of symbolic spectacle.

Abraham I. Khan is an assistant professor of African American Studies and Communication Arts & Sciences at Pennsylvania State University in State College, Pa. This was first published by The Conversation — “Let’s call athletes ‘workers,’ and let’s call these NBA protests what they were – strikes”