Home
Stocks
: The U.S. dollar is struggling. That should give a shot in the arm to global growth, Goldman Sachs says
Prev Article Next Article
This post was originally published on this site 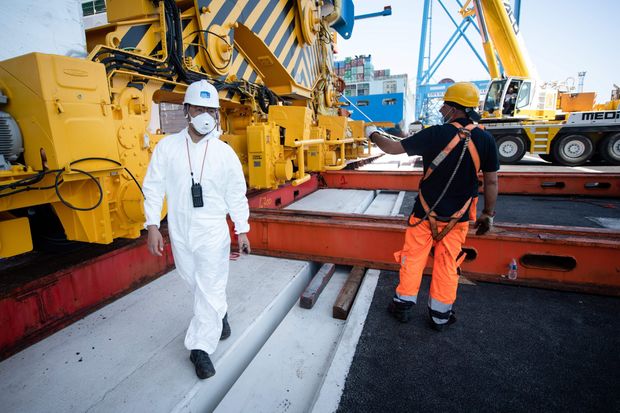 A worker of the Chinese company Shanghai Zhenhua Heavy Industries walks past one of the two blue giant Malaccamax gantry cranes, during their unloading on July 23, 2020, at the Fos-sur-Mer harbor, on the outskirts of Marseille, southern France.

The U.S. dollar is struggling, and the market is betting the greenback has more room to fall.

The trade-weighted dollar has fallen 7% from its March peak, and Goldman Sachs expects the dollar DXY, -0.00% slide to reach 15% from the highs.

That could give a shot in the arm to global growth, say analysts at Goldman Sachs. Because the dollar is the world’s reserve currency, much of global trade is denominated in dollars even when the U.S. isn’t a counterparty. That is particularly true of emerging markets, where the share of international trade invoiced in dollars is close to 100%. 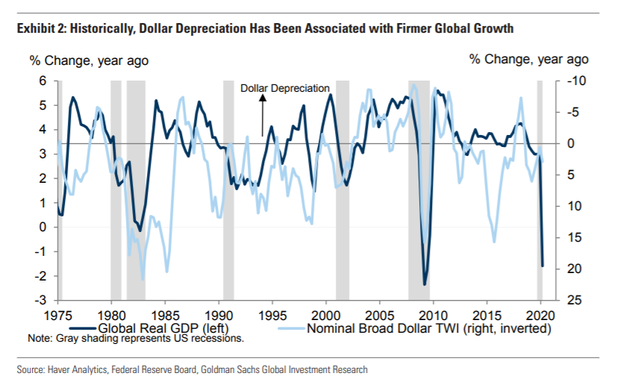 Dollar depreciation, therefore, lowers the local currency cost of imports and thus boosts import demand, trade volumes and output. Analysts including Sid Bhushan and Daan Struyven say a 10% dollar depreciation against all other currencies is associated with a 5% rise in the volume of global non-U.S. trade.

Also, about two-thirds of global cross-border credit is denominated in dollars, so dollar depreciation boosts the balance sheet of those borrowers with significant local currency assets. True, a weaker dollar is bad news for the dollar lenders, “but their spending propensity is likely to be significantly smaller than that of dollar borrowers,” say the Goldman analysts.

Another point is the dollar is often the currency in which global investors measure their returns. “When the dollar depreciates, the rise in the dollar value of local currency assets relaxes investors’ borrowing and risk constraints. This allows for larger positions in local currency assets, which in turn feed into higher local asset prices, easier emerging market financial conditions, and firmer domestic activity,” they say.