Home
Stocks
The Tell: Why the S&P 500 cares less about who’s president — particularly in their first year
Prev Article Next Article
This post was originally published on this site 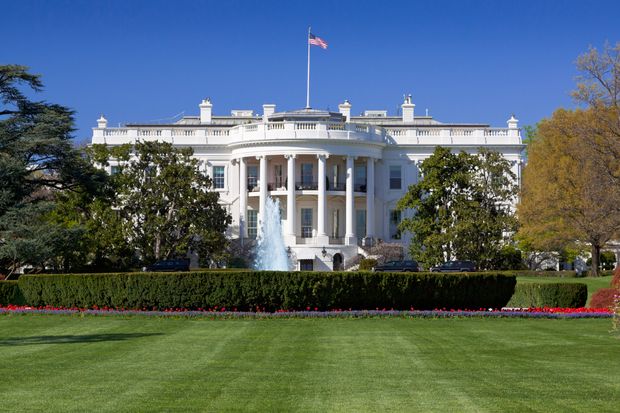 Does the market care who’s in the White House?

Can’t stomach the thought of Joe Biden or Donald Trump as U.S. president for the next four years?

Know that selling U.S. stocks to protest any winner of past presidential races, Democrat or Republican, over the past 15 years has meant losing out on skyrocketing returns during their first year in office, according to a new report from SunTrust Advisory Services.

“It is an election year, and emotions are running high,” Keith Lerner, chief market strategist at SunTrust Advisory Services, wrote in a report Monday. “We strongly caution against mixing portfolios and politics.”

To draw its conclusions, Lerner’s team looked at the performance history of the S&P 500 index SPX, +1.00% for most years from 1933 to 2019, and found that markets “have done well under a range of political scenarios,” regardless of which party occupied the White House.

And over the past 15 years, despite U.S. politics becoming increasingly acrimonious, the S&P 500 still outshined, with a 20%-plus return, during the first year of any president following an election. 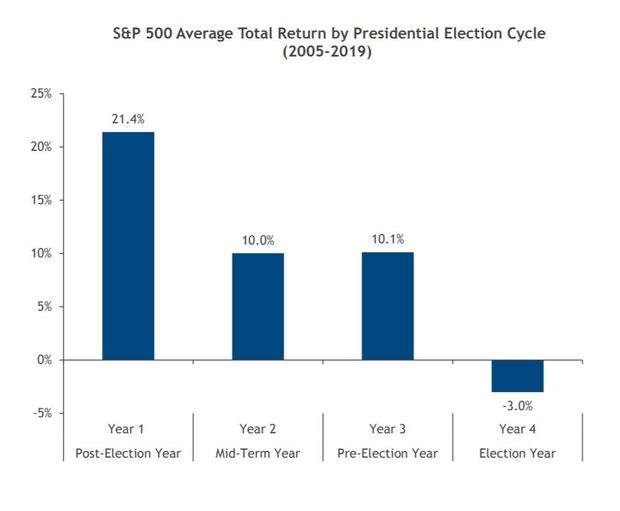 However, the chart also shows the fourth year in office can be treacherous.

Looking back, anyone who fled stocks immediately prior to President Barack Obama moving into the White House would have missed the 26% total return for the S&P 500 in 2009.

By the same token, sellers ahead of President Donald Trump’s ascent to the Oval Office would have missed the S&P 500’s 22% return booked during his first year in 2017, “even while a large number of investors suggested that the market would go down if either person was elected,” Lerner wrote.

That’s not to say specific sectors of the stock market wouldn’t be poised for a boost based on which presidential candidate prevails in November’s contest.

“For example, under a Biden presidency, renewable energy, infrastructure and stocks impacted by trade policy could benefit; alternatively, under Trump, defense & aerospace, traditional energy and financials presumably could do better,” Lerner’s team wrote.

But the team stressed that factors “well beyond Washington” — even beyond taxes — can hold sway over sector returns, including the state of the business cycle.

Specifically, the post-World War II economic boom of the 1950s resulted in the strongest 10-year annualized return for the S&P 500 in 70 years at 19.3%, despite “extremely high taxes.”

But the “very low” taxes of the 2000s resulted in a negative-1% return for the index, mainly due to bursting technology and housing bubbles.

For example, in April, as COVID-19 infections rampaged around the globe, crude oil futures CL.1, -0.21% took a curious turn into negative territory, meaning someone with a long position in oil would have to pay someone to take that oil off their hands.

U.S. corporate defaults in the energy sector already have spiked since April as global oil prices tumbled, demand waned and prices mostly stayed below $50 a barrel.

At the same time, U.S. corporations have entered uncharted waters in terms of loading up on a record amount of debt this year, as they’ve raced to bridge the earnings crisis brought on by COVID-19.

See: Corporate borrowing in 2020 to smash prior records, Goldman says

Investors hope companies will pay down their debts when the virus comes under control, potentially though an effective and broadly distributed vaccine, and earnings improve.

But 2020 is bringing no shortage of shocks, including the recent threat of Postal Service delays ahead of the Nov. 3 election as mail-in voting takes on a vital role during the pandemic.

Related: Why stock-market investors are bracing for the ‘most litigated’ election in U.S. history

Also, tropical storms in the Gulf of Mexico have slowed offshore oil and gas production this week, while firefighters in California are battling some of the largest wildfires in the state’s history at the onset of wildfire season, which Gov. Gavin Newsom said on Monday was 25 times worse than the same period in 2019, making it anyone’s guess what other calamities might lurk in the months ahead.