Home
Stocks
Dispatches from a Pandemic: ‘I was in so much fear that I started running’: Asian Americans must grapple with racism — as well as the coronavirus pandemic
Prev Article Next Article

It was Oct. 3, 1965, when President Lyndon Johnson signed the Immigration and Nationality Act that abolished the so-called National Origins Formula, giving to Asian Americans, among other minorities, the right to become U.S. citizens after years of tension and discrimination, particularly in the wake of World War II. The law, supported by both Republicans and Democrats in Congress, was a milestone in American history.

But now another moment could risk complicating years of progress for Asian Americans: The coronavirus pandemic.

People in countries including South Korea, Malaysia, the U.K. and Canada are reporting the spread of anti-Chinese racism, attacks on the country’s cultural mores and businesses with signs saying, “No Chinese.” The U.S., it seems, is not immune. Almost 40% of people said it has become more common for people to express racist views toward Asians since the pandemic began, according to a Pew Research Center survey with a 9,654-person sample size.

“ ‘As I was walking, I heard a lady who was shouting at me, accusing me I have brought the virus.’ ”

There have been more than 2,100 anti-Asian American hate incidents related to COVID-19 across the country, only between March and June, according to the database of the Asian Pacific Policy and Planning Council and Chinese for Affirmative Action, a coalition of community-based organizations that advocates for the rights and needs of the Asian and Pacific Islander American community.

“One day, I was walking down the street in Astoria, on my way to the bank. As I was walking, I heard a lady who was shouting at me, accusing me I have brought the virus,” said Dorothea Gloria, a 28-year-old actress living in Queens, N.Y. who is from Manila, in the Philippines.

Like so many other artists, Gloria moved to the U.S. four years ago, chasing her dreams in a multi-cultural environment like New York City. Since the pandemic has started, however, she perceived a shift in people’s behaviors on the street.

The episode that day proved it.

“It was along the lines of, ‘Chinese bitch! You brought the virus here, you bitch!’ Before she could get closer to me, I walked faster away from her. While she still kept aggressively shouting at me, I was in so much fear that I started running. It was the first time I have ever felt like someone wanted to hurt me just because of the way I look,” she said. 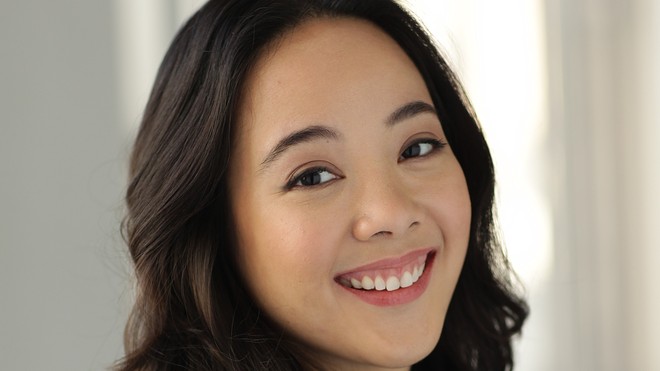 Dorothea Gloria: ‘It was the first time I have ever felt like someone wanted to hurt me just because of the way I look.’

Gloria is not the only discrimination victim in the United States. Nearly a third of Asian Americans (31%) say they have been subject to racist slurs or jokes, while 26% say feared someone might physically attack them, the Pew Research Study found.

The focus on Wuhan, the Central Chinese city where the virus is believed to have been first diagnosed in December, and rumors about whether it began in a food market there, have led to reports of racism against Asian Americans and the sharing of xenophobic memes online.

“ ‘Since February, I had the feeling I was the person no one wanted to have around.’ ”

“Since February, I had the feeling I was the person no one wanted to have around,” said Kiana Wu, a 23-year-old Taiwanese-Canadian, who has lived in New York for three years until last March.

She felt under a microscope for the duration of the flight. “I remembered I was walking on the aisle of the plane during a flight from Florida to New York, and people were looking at me scared,” Wu recalled.

No one was wearing a mask in the U.S. back then, in late February, she added. “I was not wearing a mask either, and people behaved like they were wondering, ‘Where is she coming? Was she in China recently? Why is she flying with the rest of us? It was awkward.” 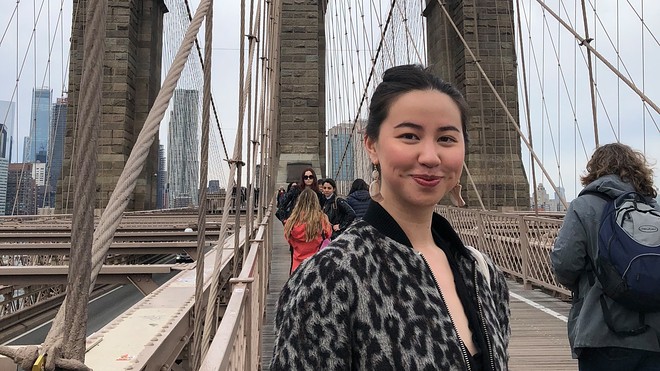 Kiana Wu: ‘I was walking on the aisle of the plane during a flight from Florida to New York, and people were looking at me scared.’

Even if isolated, episodes like these could have a prolonged mental impact, according to therapists and doctors. That was the case of Dorothea Gloria.

“Especially during the next few weeks after that incident, I was so paranoid to even go to the grocery,” she said. “I even told my boyfriend, ‘Hey, let’s stay under the sun a bit more so I can look more Filipino.’ I said this jokingly, but I think these words came from fear from that incident.”

Asian Americans are among the most diverse and fast-growing communities in the United States today. Nearly 21 million Americans are Asian, according to the American Community Survey Demographic and Housing Estimates by the U.S. Census Bureau. The number of eligible voters more than doubled, growing by 139% to 7.5 million from 2000 to 2020, according to Pew.

Asian Americans are, of course, a culturally rich and diverse community, and include Chinese, Indians, Japanese, Filipinos, Japanese, Koreans, Vietnamese and Bangladeshi, among many other nationalities and ethnicities.

The median annual household income of Asian Americans is still the highest of the country per race, with $85,897 dollars, compared to $65,902 for Caucasian Americans, $41,511 for Black Americans, and $51,404 for Latino Americans.

“What is ironic is that we have a huge percentage of Asian Americans in the hospitals helping to save people from COVID-19 right now,” said Elizabeth OuYang, a civic engagement consultant in the Asian Pacific American community. “At the same time, we have been targeted just because of how we look.”

OuYang’s parents emigrated from China to the U.S. in the 1950s, and she has been a civil rights attorney for over 25 years. When 2020 began, one of her goals was to educate and advocate for Asian Americans to be part of the electoral process.

“ ‘My brother is a doctor on the frontline and has been targeted to unfair racial offenses.’ ”

Then, the coronavirus hit the U.S. hard, and the rising number of episodes of discrimination changed part of her mission, too. “My brother is a doctor on the frontline and has been targeted to unfair racial offenses,” pointed out OuYang, who realized something was going to change badly in the early spring.

“It was when people saw me and would think I was from China or as Chinese American. They act differently toward me.”

For consultants like OuYang, she said there is one person who is not helping to quell such actions against Asian Americans: President Donald Trump.

“A lot of damage was done by the current administration to malign COVID-19 as a ‘Chinese virus.’ So the spike in hate crimes against those who are perceived to look Chinese, whether or not they were Chinese Americans, was and is real,” OuYang said.

Up until the task force press briefing held at the White House on Feb. 29, President Trump praised Chinese President Xi Jinping, for how China was handling the coronavirus crisis. But starting in March, OuYang noted, something changed.

On multiple occasions, the president referred to the coronavirus as the “Chinese virus.” And during the rally in Tulsa, Okla., on June 20, the president introduced another pejorative nickname that many professors, academics, and advocates considered as racist: “Kung Flu.”

“It has more names than any disease in history. I can name it Kung Flu. I can name 19 different versions of names,” Trump has said to cheers from the crowd in Tulsa.

“After 9/11, President George W. Bush reminded the American people that the Muslim Americans were not terrorists despite the terrorist attack,” said Jerry Vattamala, Director, Democracy Program at the Asian American Legal Defense and Education Fund, an organization that protects civil rights of Asian Americans.

“Bush’s presidential tone had preserved and stemmed a further spiking of episodes of discrimination back in 2001,” he said. Vattamala thinks that the current president is fanning the flames of hatred instead.

“ ‘A historical moment like this, it can become dangerous for the daily lives of all the Asian-Americans, not only the Chinese population.’ ”

— Jerry Vattamala, Director of the Democracy Program at the Asian American Legal Defense and Education Fund

“A historical moment like this, it can become dangerous for the daily lives of all the Asian Americans, not only the Chinese population,” said Vattamala, whose parents moved from India to the U.S. in the 1980s.

With episodes of discrimination on the rise, some Asian Americans feel they need to take some kind of action to protect themselves.

Asian Americans firmly support gun control, according to the 2018 Asian American Voter Survey by APIAVote and AAPI Data. Asian American voters favor stricter gun laws in the U.S. by a nearly 7-to-1 ratio, the same survey said. But the spike in acts of discrimination has changed the perspective of many Asian Americans about guns. Several media outlets have reported that a large portion of Asian Americans have become customers at gun shops in the last few months.

“ ‘I have always been very against guns, but now I am reconsidering it. If my family is in danger for the color of its skin, I think I have the right to protect myself and themselves.’ ”

— Rob Chen, an advocate for the safety of Asian-Americans

“I have always been very against guns, but now I am reconsidering it,” said Rob Chen, 26, advocate for the safety of Asian Americans, from Brooklyn. “If my family is in danger for the color of its skin, I think I have the right to protect myself and themselves.”

With discrimination rising, Chen said he has changed his daily life approach: “I am more cautious when I walk outside, and I make sure to charge my phone before I leave my apartment,” explained Chen.

“If something happens to me, people will know, and I need the proof,” he added.

The day he realized Asian Americans had become a target? Last month, when a man in Brooklyn slapped an 89-year-old Asian woman in the face before lighting her clothes on fire.

Speaking in Cantonese through a translator, the victim in that incident told ABC Eyewitness News DIS, -0.62% that she left home in Bensonhurst on the evening of July 14 when the two men approached her. After one man slapped her, she felt a sharp pain on her back and realized they’d burned her shirt. She rubbed her back against a wall to put out the flames.

“That could have been everyone’s relatives,” Chen said, complaining about the lack of coverage about these episodes by the news media, and underlining the importance of education.

“People who discriminate against us, they have to understand that the Chinese government and Chinese people are two very different things,” said Chen. “I am not the one who spreads the virus to you, even if the virus probably came from the country I am originally from.”

And for people like Kiana Wu, the future is challenging. “For decades they thought about Asian Americans as the model minority, the perfect workers,” she said. Now, many in the U.S relate Asian Americans with sickness and death, Wu said. “It is sad, but we have to make efforts to change it.”