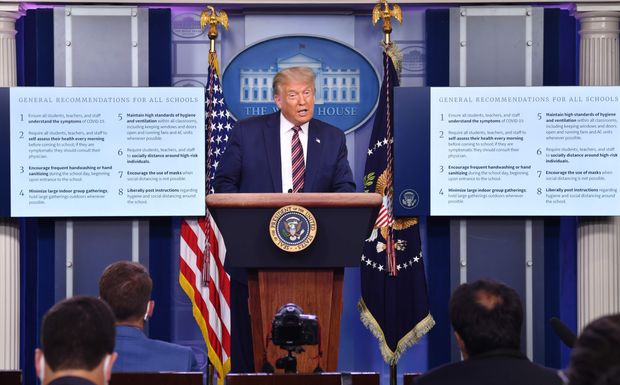 President Donald Trump said the government would be providing “up to 125 million reusable masks” to schools across the country that reopen.

Encouraging widespread use of face masks and “minimizing large indoor gatherings” were two of those recommendations.

Throughout the course of the pandemic, Trump has strongly advocated for schools to reopen across the country. At one point he even threatened to cut funding to schools that don’t hold in-person learning.

“We cannot indefinitely stop 50 million American children from going to school and harming their mental, physical, emotional and academic development and inflicting long-term, lasting damage,” he said during a briefing held Wednesday.

“All families should be empowered to make the decision that is right for their own circumstances,” Trump said. “This is especially important if a child has underlying health conditions or lives with a parent or grandparent who is at a high risk. “

“We’re looking for that responsible path forward to shelter those at highest risk while allowing those at lower risk to resume work in school and play football. Go play football,” Trump said.

He announced that “up to 125 million reusable masks” would be provided to schools across the country. “My administration also stands ready to deploy CDC teams to support schools that are opening,” he added.

He said that a total of $13 billion has been set aside from the CARES Act stimulus package to help school reopen. His administration, he said, is looking at ways to implement a direct payment to parents “so that if a school is closed, the family can go to another school.”

Trump said he didn’t watch it but saw “just a moment” of it.

The S&P 500 SPX, +1.40% closed six points below what would’ve been an all-time high for the index on Wednesday. The Dow Jones Industrial Average DJIA, +1.04% closed nearly 300 points higher.