Home
Stocks
The Tell: Americans are anxious. That’s bad news for the White House – and stocks.
Prev Article Next Article
This post was originally published on this site 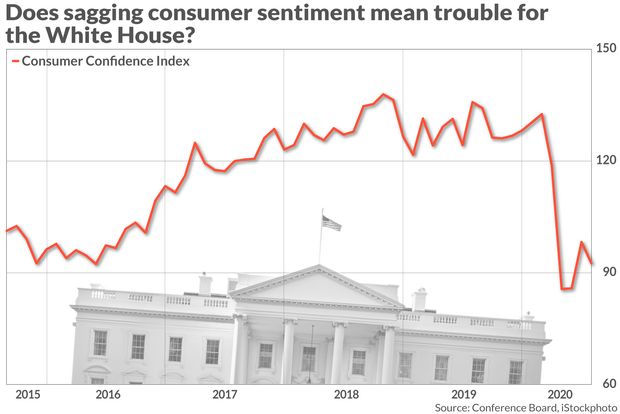 As coronavirus cases surge in many American states, policymakers bicker about how to manage the pandemic, and jobless benefit claims tick back up, consumer confidence is plunging.

That’s bad news, according to an analysis from TS Lombard Chief US Economist Steve Blitz: bad for the incumbent in the White House, and bad for risky assets like stocks – although there are some caveats to that.

The Conference Board’s monthly measure of consumer confidence fell to 92.6 in July, the group said Tuesday. For some context, before the pandemic hit, the gauge sat at a 20-year high. Now it’s back to late-2015 levels.

“Admittedly, confidence has not yet dropped to as low a level as during previous recessions, but therein lies the risk for the economy later this year,” Blitz wrote. “The gap between consumer expectations and real growth is extraordinarily wide, and will get a lot wider after Q2 GDP data are released on Thursday.”

When the first reading of second-quarter gross domestic product is released Thursday, economists surveyed by MarketWatch believe it will show the economy contracted 34.6% – far worse than the worst-ever reading until now.

The confidence index report also contains some warning signs about the job market, Blitz notes. The share of survey respondents who say they expect more jobs in the months ahead declined, and those who said they expect fewer jobs increased, even as the number of people expecting a decrease in their income rose.

“The income number is recessionary and matches the early years of the expansion just ended,” Blitz said. “The sharp drop in the ‘more jobs’ expectation in July tells us that consumers see what we see in the macro data at ground level. If job sentiment continues to sink, a drop in overall confidence would follow and that makes it difficult for the equity market to sustain current levels – regardless of the Fed. To be fair, there is a ‘chicken-and-egg’ quality to the relationship between confidence and the equity market. Which leads and which lags is hardly consistent – although confidence tends to lead the market on the way out of recession.”

The relationship between confidence and how Americans vote is more consistent, Blitz noted. When the index is over 100 in July, the incumbent party in Washington typically holds the White House in November. In five out of seven of recent races, however, an index reading below 100 means the incumbents lose.

Read next: Coronavirus cold comfort: the top 1% lost more wealth in Q1 than the rest of us