Home
Stocks
Key Words: Potential Biden running mate Bass says Trump has done what ‘George Wallace would have done’ as president
Prev Article Next Article
This post was originally published on this site

“ ‘His presidency is what I would have imagined George Wallace would have done, had he won for president. It’s just been horrible when it comes to race relations.’ ”

When asked about what Biden should get from his pick for vice president, Bass said the Democratic challenger “needs somebody that can help him heal the nation.”

“President Trump over the last three and a half years has just torn us apart — torn us apart domestically, torn us apart internationally. The race issue is just — he has taken it to a low,” she added, before then making the comparison to George Wallace, the late Democratic Alabama governor who was known for his vehement support of segregation in the 1960s and his multiple unsuccessful White House runs. Her comments came as she took part in an online Q&A run by The Wall Street Journal.

Bass, who chairs the Congressional Black Caucus, declined to say whether she has gone through vetting as part of Biden’s search for a running mate, but she did say she would not be interested in a White House run in 2024 if she’s the vice president at that time.

“I have no aspirations,” she said.

See:Biden’s running-mate search is getting ‘outsized attention’ and could even shake the stock market — here’s how

And read:As Biden widens polling lead over Trump, here’s who could be his vice-presidential pick 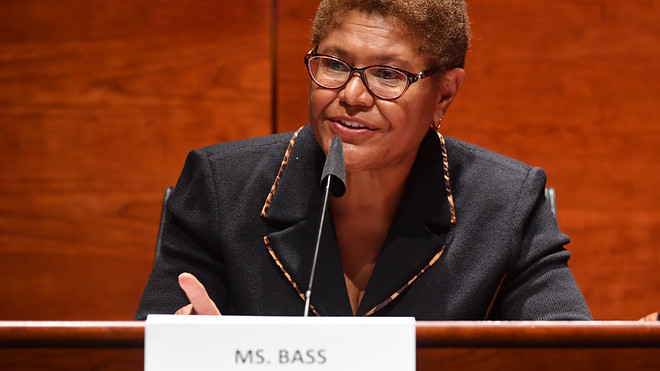 Biden has promised to pick a woman to be his vice president, and Bass is considered a contender, along with other Democratic politicians such as Sen. Kamala Harris of California, former national-security adviser Susan Rice, Sen. Tammy Duckworth of Illinois, Sen. Elizabeth Warren of Massachusetts and Rep. Val Demings of Florida. The 77-year-old Biden’s age has prompted questions about whether he would serve two terms as president and heightened interest in his choice for his running mate.

Bass last week criticized what she described as the Trump administration’s “rush to open up the economy” following lockdowns imposed to fight the coronavirus pandemic. She accused the administration of quietly “adopting a strategy of herd immunity” for COVID-19.