Home
Stocks
Europe Markets: European stocks and U.S. futures fall as Trump warns pandemic will ‘get worse before it gets better’
Prev Article Next Article
This post was originally published on this site 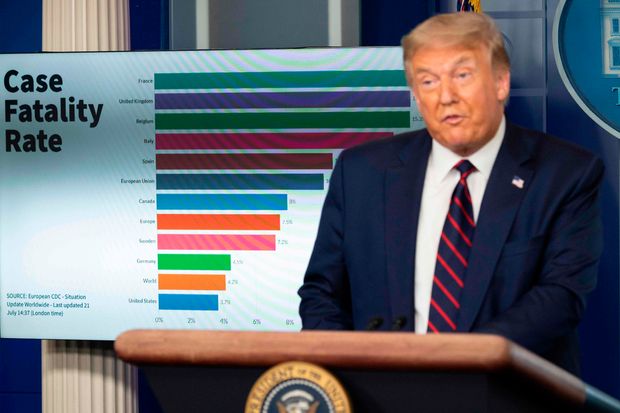 U.S. President Donald Trump speaks during the renewed briefing of the Coronavirus Task Force in the White House on July 21, 2020.

European stocks and U.S. futures slipped lower on Wednesday, after U.S. President Donald Trump warned the pandemic would “get worse before it gets better.”

Coronavirus fears have lingered in the background in recent days, overshadowed by vaccine hopes and the European Union’s €1.8 trillion ($2.1 trillion) budget and recovery plan. But concerns over the virus seemed to be firmly at the front of investors’ minds early on Wednesday. Cases in the U.S. rose above 3.8 million on Tuesday and Trump appeared to change his view on face masks, urging Americans to wear them and practice social distancing, as the White House daily briefings returned for the first time since April.

Reports that the U.K. is close to abandoning hope of a Brexit trade deal with the EU pushed sterling GBPUSD, -0.44% 0.6% lower. Substantial losses for the pound would typically boost the FTSE 100 UKX, -0.85% but the U.K.’s benchmark index was 0.5% lower

The euro EURUSD, +0.12%, which rose to 18-month highs after the EU recovery deal was agreed on Tuesday, held steady at $1.15. U.S. dollar weakness sent gold GOLD, +0.39% and silver futures SI00, +3.14% surging late on Tuesday, and both contracts continued higher early on Wednesday.

Kingfisher KGF, +11.41% climbed more than 10%, after the do-it-yourself home improvement group reported strong second-quarter results as consumers stocked up on supplies to do work to their homes during lockdown. Like-for-like sales jumped 21.6% in the three months to July.

Melrose Industries MRO, -16.10% fell 15%, after the turnaround specialist said revenue fell 27% in the six months to June 30, and that cost reductions due to the pandemic would lead to job losses, adding that it won’t pay an interim dividend for 2020.