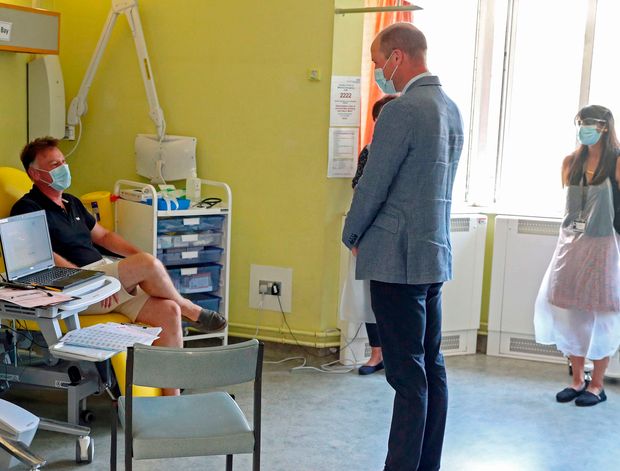 Prince William, Duke of Cambridge, wears a face mask as a precautionary measure against spreading COVID-19 and talks to a patient participating in a COVID-19 vaccine trial at Oxford Vaccine Group’s facility in Oxford, England, on June 24, 2020.

AstraZeneca and GlaxoSmithKline headed in opposite directions on Monday, as the two heavyweight pharmaceuticals were in the spotlight over coronavirus news.

AstraZeneca AZN, -0.57% AZN, -2.95% rallied nearly 6% in London as traders eagerly awaited the publication of clinical data in medical journal The Lancet on the University of Oxford’s COVID-19 vaccine, which the U.K. drugmaker will distribute.

AstraZeneca shares have climbed over 12% in the last five days alone.

An AIM-listed stock, Synairgen SNG, +360.27%, jumped 370% after announcing positive results from a trial in hospitalized COVID-19 patients. The odds of developing severe disease during the treatment period were significantly reduced by 79% for patients receiving its SNG001 compared with patients who received placebo, the company said.

The broader FTSE 100 UKX, -0.69% slipped 0.5%, the worst-performing of the major European indexes. Analysts at JPMorgan Cazenove noted the U.K. is by far the worst performing index in dollar terms this year — and in each of the past five years — though they now upgraded the U.K. to neutral from underweight.

The analysts say the worst of the fallout from the reduction in dividends is now over.