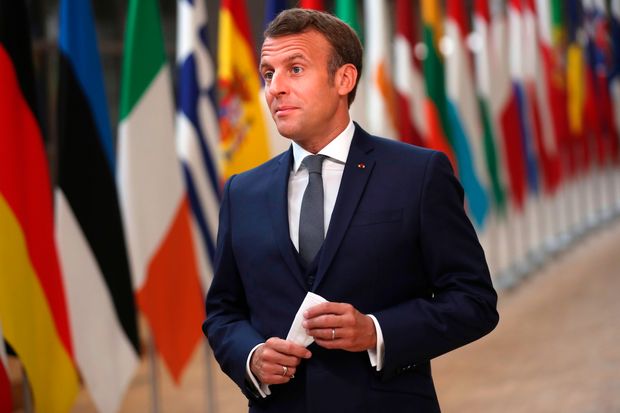 French President Emmanuel Macron makes a statement as he arrives for a European Union Council in Brussels on July 17, 2020, the leaders of the European Union hold their first face-to-face summit over a post-virus economic rescue plan.

European stocks struggled Friday, with investors absorbing a handful of earnings and keeping watch on an European Union leaders meeting to discuss a recovery fund for the region.

That’s as coronavirus cases contined to climb in the U.S., which broke a daily record for the 11th time on Thursday, with 75,000 new infections.

European leaders are kicking off a crucial two-day meeting on Friday to discuss a proposed €750 billion rescue fund from the European Union to help the region face down the pandemic-driven economic crisis.

The key will be whether France and Germany can overcome the opposition from the so-called Frugal Four — Austria, Denmark, the Netherlands and Sweden. Since the initial Franco-German proposal for joint debt issuance was announced on May 18, the Stoxx Europe 600 has gained 13%.

Shares of Netflix NFLX, +0.78% were set to drop on Friday after the streaming video group posted better-than-expected revenue and subscriber growth in the second quarter, but provided a cautious outlook for the third quarter.

The company “warned that new subscribers in the upcoming quarter may well come up short due to pull forward effects starting to wane as lockdown measures continue to get eased further, as we head towards the end of the year,” noted Michael Hewson, chief market analyst at CMC Markets in a note to clients.

Shares of Ericsson ERIC.B, +9.53% ERIC.A, +7.51% surged 9%, leading gainers on the Stoxx 600 after the telecoms equipment maker backed its full-year guidance, noting limited impact from Covid-19 in the second quarter. Ericsson said that some customers are accelerating their investments, though others are temporarily cautious.

Shares of SAAB AB SAAB.B, +4.41% climbed 4.5% afterthe Swedish automaker reported a 20% jump in net profit, as sales exceeded expectations and orders increased sharply. But SAAB said it can’t rule out a further impact on its business from the coronavirus pandemic.

Travel-related stocks took a step back, with Carnival PLC CCL, -9.72% down 5.7%, and EasyJet PLC EZJ, -3.53% and International Airlines Group IAG, -3.07% down over 3% each. A spokesman for British Airways, operated by IAG, told the BBC that the airline will retire its entire Boeing 747 fleet owing to the collapse of air travel due to the pandemic.

A British Airways spokesperson could not immediately be reached for comment.