Home
Stocks
Economic Report: More than 1 million people likely applied for jobless benefits in early July — and it might get worse soon
Prev Article Next Article
This post was originally published on this site 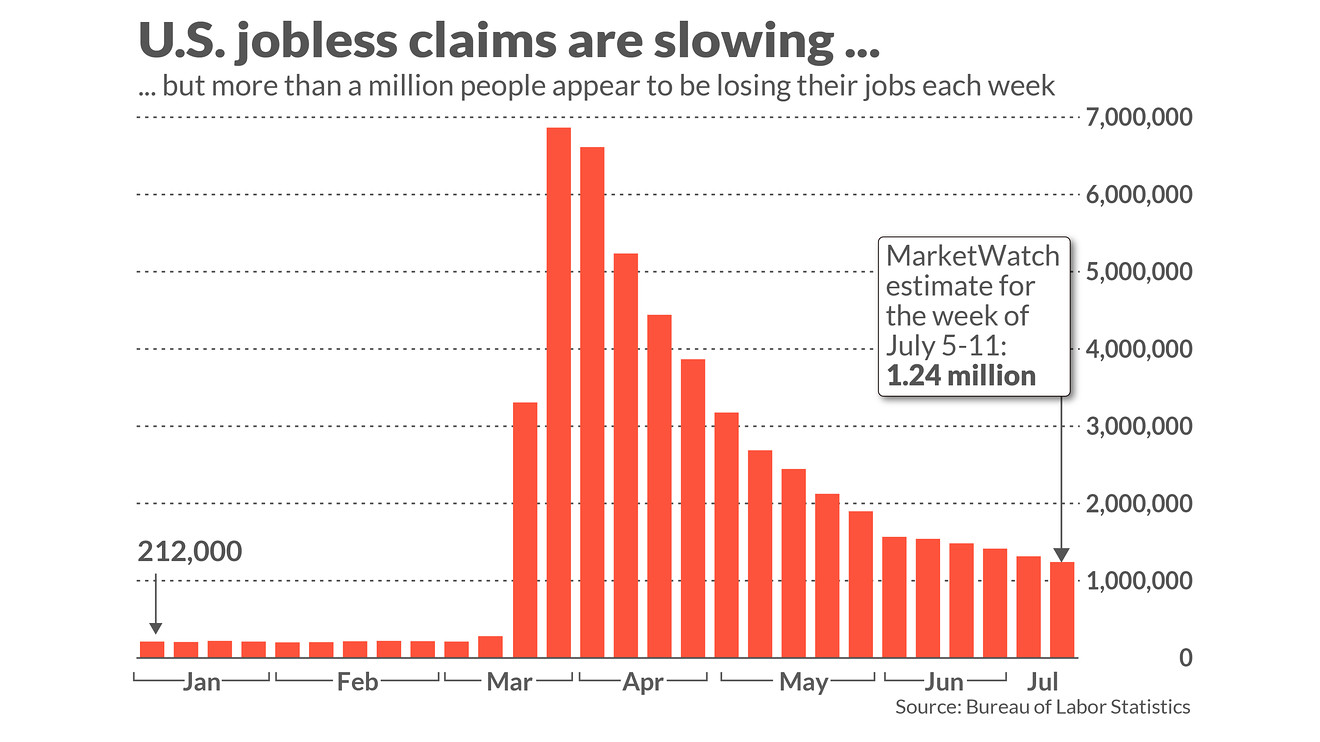 The number of applications for unemployment benefits is likely to top 1 million for the 17th straight week, underscoring the difficulty the U.S. is experiencing as the economy tries to recover from the coronavirus.

Economists polled by MarketWatch forecast a small decline in initial jobless claims to 1.24 million in the seven days ended July 11. The estimate is seasonally adjusted and only includes claims filed through state unemployment agencies.

It’s possible the July 4 holiday pushed some filings into the second week of the month, however, and that might cause new claims to rise for the first time since the end of March.

And: Jobless claims tell us 32.9 million people are unemployed, but is it really that bad

The latest outbreak of COVID-19 cases in some states isn’t helping.

California reimposed tight restrictions this week on most businesses and other states have also drawn a harder line. The result could be another wave of layoffs or temporary job losses that might push unemployment claims higher in the next month.

Economists at Jefferies said the number of clicks on the web pages of state unemployment agencies “appears to be picking up again, which means that jobless claims are at risk of ticking up.”

The labor-research firm Glassdoor also found that job openings have fallen sharply since late June, indicating that fewer companies are adding staff compared to a month ago.

The still-high level of new jobless benefit claims filed through the states has surprised economists. Most had expected new applications for benefits would have dropped below 1 million by now.

The picture is even worse if new claims filed under an emergency federal relief program are included. The combined number of state and federal jobless claims has yet to fall below 2 million since the pandemic nearly capsized the economy in March.

Economists have offered plenty of explanations for the high level of claims, but they haven’t rallied around a single explanation.

Some believe the number of claims is inflated by repeat filings and errors by undermanned state unemployment offices saddled with old technology. Many states are still working through a backlog of claims that in some cases are weeks or even months old.

Lots of companies have also announced layoffs or a decision not to bring back all furloughed workers because of soft sales.

As government aid for businesses runs out, economists say, there could be more layoffs. The situation will get even worse if the viral outbreak this summer is not brought under control soon.