Home
Stocks
: Class of 2020 graduate on leaving school in a COVID economy: ‘I’m just going to get any job that I can to make use of myself’
Prev Article Next Article
This post was originally published on this site 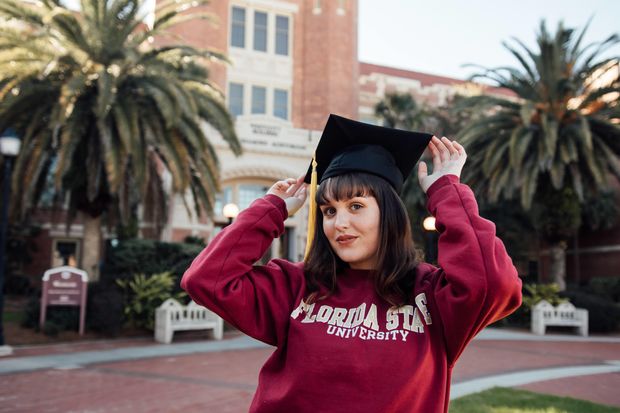 At the beginning of her senior year of college last fall, Maia Hass’s goal of working in a marketing role at an entertainment company, like Disney DIS, +0.12%, seemed totally attainable.

Her peers who walked across college stages earlier that year entered a healthy job market, and Hass, 21, was hustling. A double major in marketing and international affairs, she spent weekends at a coffee shop perfecting her resume and cover letters and applying to jobs.

But now, several months, a global pandemic and an accompanying economic downturn later, Hass feels lucky to be working, even if she isn’t doing what she expected. Earlier this month, Hass’s post announcing her new role as an employee stocking shelves, working the cash register and doing other tasks at Target TGT, +0.17%, racked up more than 30,000 reactions and more than 1,000 comments on LinkedIn.

“The world is still trying to put itself back together and I understand that it’ll take time before more opportunities arise,” she wrote. “I am confident that the right job will come to me when the time is right.”

Though Hass is maintaining a positive attitude, her post is an indication of the challenges young people are facing in today’s economy. Recessions are often challenging for workers with the least experience, but this economic downturn has devastated the sectors where workers ages 16 to 24 are disproportionately represented. Exacerbating these challenges are the unprecedented levels of student debt young adults often have to assume in order to receive their degrees.

Are you a recent graduate navigating the job market? We want to hear from you: email jberman@marketwatch.com

In 2019, 25.8% of these young workers had jobs in leisure and hospitality compared to 7.4% of workers 25-years-old and older, according to an analysis of data from the Bureau of Labor Statistics by Elise Gould, a senior economist at the Economic Policy Institute, a labor-focused think tank. That sector lost nearly 41.8% of its jobs between February and May 2020.

A large share of young workers also had jobs in the retail trade sector, which lost nearly 12.8% of its jobs during the same period, according to Gould’s analysis. In 2019, 18.9% of workers 16 to 24 had jobs in this sector compared to 9.4% of workers 25-years-old and older.

Those trends are different from what we often see during a downturn and what we saw during the Great Recession when soft demand from consumers meant that sectors like manufacturing and construction were most acutely affected, Gould said. “There was less of an age component” then, she said. This time, the sectors most impacted are those that have a lot of interaction with the public and those are the same industries that employ a lot of young workers, Gould said.

“ ‘Graduating into a recession has long lasting effects for your career.’ ”

“Graduating into a recession has long lasting effects for your career,” Gould said. The longer this downturn lasts, the more likely it is to be “more than just a blip on young people’s career trajectory,” Gould said.

“When the unemployment rate is higher, employers can be choosy,” Gould said. “There’s a lot of workers out there — why pick the younger, least-experienced ones?”

Tired of staring at LinkedIn

After graduating in May, Hass spent about a month and a half searching for jobs, estimating that she sent out about 60 applications. She’s currently living at home with her mom in Chicago. She wasn’t worried about repaying student loans because she was able to fund her in-state tuition at Florida State University through scholarships and grants. Still, she was eager to find a job. Making little headway in the midst of a pandemic, Hass decided to switch strategies.

“I was just like I’m tired of sitting in bed all day and not doing anything, driving myself crazy and staring at LinkedIn,” she said. “I’m just going to get any job that I can to make use of myself.”

Like many members of the class of 2020, Hass had already suffered a series of disappointments. There was the pandemic-related end to interview processes that otherwise seemed to be going well. And of course, Hass missed so many of the milestones typically associated with the end of college.

‘I watched graduation online like everyone else and I just cried’

Because she left school for spring break and never came back, Hass didn’t get the chance to say goodbye to her friends and professors. “I watched graduation online like everyone else,” she said, “and I just cried.”

Graduating college “wasn’t casual,” for her, Hass said. “the fact that I wasn’t able to celebrate it really hurt.”

Hass, whose parents didn’t go to college, navigated the process of applying to school with help from her high school friends and their parents. They advised her to volunteer and participate in extracurricular activities to make herself an attractive applicant.

Once Hass got to school, she recognized her experience was different from that of many of her classmates. Some had grown up knowing they were going to attend college and as they talked about things like finding internships, Hass said she didn’t know where to start. She joined a business fraternity, which helped her get a sense of future career prospects and prepare her for the job market.

She watched in awe as some of her new college friends posted pictures on social media of beautiful houses by the water, the likes of which she’d never visited in her life. “I realized that I’m different,” Hass said. “I came from a different background and I still kind of succeeded.”

“It’s been hard of course,” she added. “Sometimes I wonder if I lived in that house and I had parents that had the money and resources to give me a boost, maybe I would have still done something else.” But Hass dismissed that notion quickly, saying “I can’t keep thinking like that.”

She decided to post on LinkedIn to help get out of the funk of disappointment that this period has brought. “Over the last few months, I feel like I’ve lost all confidence in my job seeking abilities and there’s nothing I can do, but wait.”

The generous feedback Hass has received so far on the post, including from people who had similar experiences during the last recession, has helped encourage her to resume her job search, she said. She’s also hopeful the post may attract attention or a DM from potential employers.

“I’m just crossing my fingers that it will lead to something,” Hass said.