Home
Stocks
Need to Know: Small companies are doing amazing things right now, and ‘nobody is paying attention,’ says this fund manager
Prev Article Next Article
This post was originally published on this site

Reassurance over U.S.-China trade progress is getting some credit for setting up a rally-in-the-making for stocks, while European equities are rallying after data showed output is “no longer collapsing.” 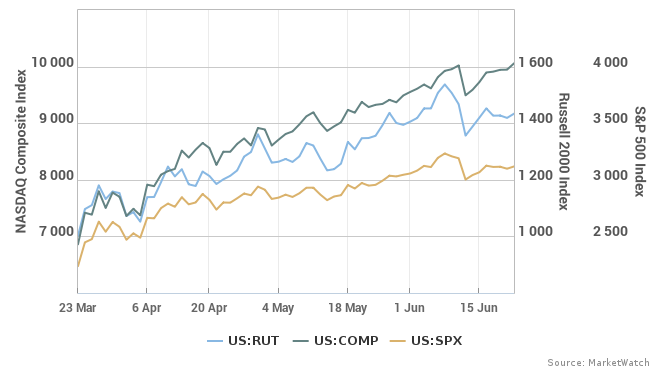 Our call of the day from Mary Lisanti, president of Lisanti Capital Growth and manager of the Lisanti Small Cap Growth Fund ASCGX, +1.78%, says “nobody is paying attention” to the buzz surrounding smaller companies these days.

The 36-year veteran of small-cap research tells MarketWatch that when COVID-19 hit, she started talking to companies about what they what they saw going forward and new opportunities they were finding due to the disruption.

“I don’t think I’ve ever seen a period of time where there’s this much innovation and this much maturity among the smaller companies that are public. They’re run by experienced people, they’ve got good strategies, they’re getting better all the time and to me it’s probably one of the best class of smaller companies I’ve seen,” says Lisanti.

One theme she doesn’t see going away is work-from-home. A top pick in her portfolio is Inphi IPHI, +3.84%, which makes components for semiconductors and optical platforms. She describes what Inphi does as “the picks and shovels that get the bandwidth wider,” needed to build out 5G networks — a five-to-10-year process — and meet demands of at-home workers.

Lisanti also owns Freshpet FRPT, +1.43%, which makes fresh food for dogs and cats. She says she got interested when former Sunny Delight Beverage Chief Executive William Cyr took the helm a few years ago. Cyr did a lot of consumer research, streamlined and stabilized the company and started advertising. The pandemic has boosted Freshpet’s business because lockdowns have driven up pet adoptions, she says.

Then there is all-in-one cloud contact center solution Five9 FIVN, +7.77%, which does its work remotely and has just signed a deal with AT&T T, -0.66%, and shoe maker Crocs CROX, -0.04%, which found a pandemic niche by providing comfy shoes to health-care workers, she says.

“The common thread here is that all of these companies used what was going on as an opportunity to grow business,” says Lisanti.

Stocks linked to economic reopenings have been faring less well lately than those geared to staying at home, says this chart from LGC’s head of research, Jasper Lawler: 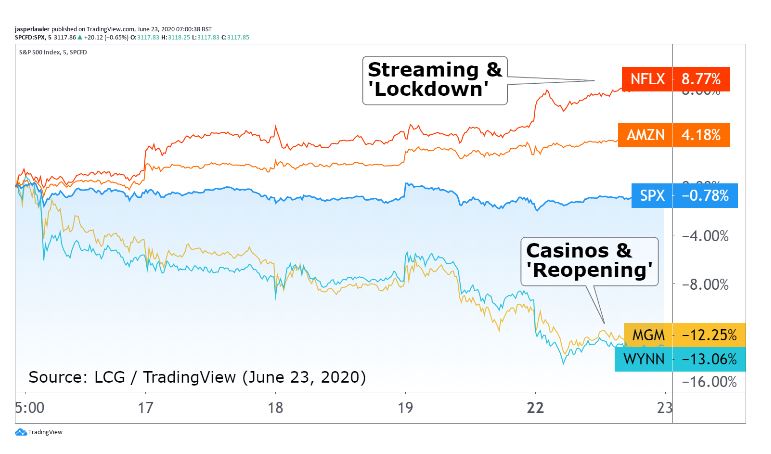 White House trade adviser Peter Navarro said his comments on a Fox News interview suggesting the China-U.S. trade deal was “over,” triggering Monday-night volatility for stocks, were “wildly taken out of context.” President Donald Trump also tweeted that the deal was “intact.” The trade agreement isn’t out of the woods, says this economist.

Boston Federal Reserve President Eric Rosengren said the second half of 2020 may be tougher than many expect. The Markit manufacturing and services indexes for June and May new home sales are ahead.

The Trump administration is freezing green cards and temporary visas until the end of the year, to free up 525,000 jobs.

Opinion: Apple says more with its quiet actions than on the WWDC keynote stage

These hand sanitizers are toxic.

COVID-19 is fueling a boom for secondhand clothing.