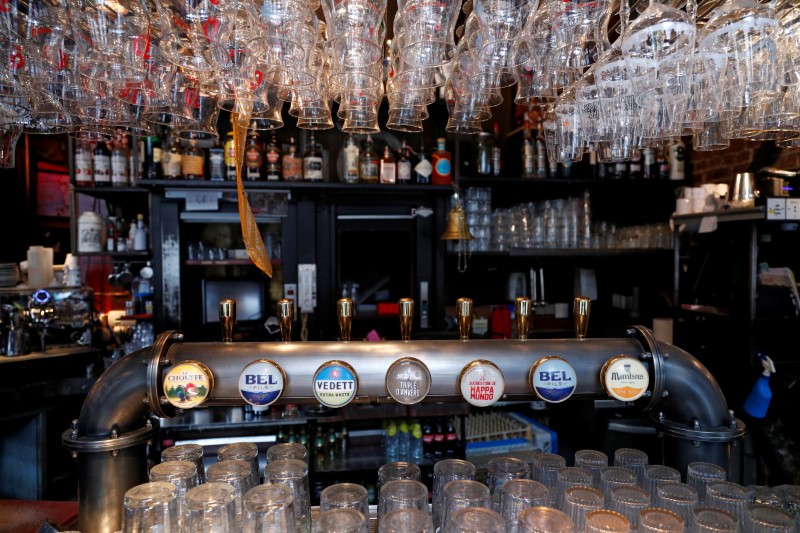 BRUSSELS/COPENHAGEN (Reuters) – As bars across Europe gradually reopen, up to a million free or pre-paid beers are waiting to lure back wary consumers.

Beer makers from global giant Anheuser-Busch InBev (BR:ABI) to smaller craft brewers have set up schemes for consumers to buy drinks in advance to support shuttered bars with, in some cases, the reward of free beer when the doors reopen.

AB InBev launched its first scheme “Cafe Courage” in Belgium and has since sold over 200,000 Stella Artois, Jupiler and other brands. It also started similar schemes in 20 other markets across Europe and from Brazil to Hong Kong, raising over $6 million for pubs, bars and restaurants.

Now the bars are opening, consumers have had their first chance to redeem coupons or vouchers.

Danish friends Arendse Rohland and Thomas Hoffner Lovgren were among those to profit from free beers after bars re-opened there on May 18.

Danish brewer Carlsberg (CO:CARLb) offered lagers in a bar to consumers who bought bottles or cans from stores in its “Adopt a Keg” scheme. The idea was to lure drinkers back with free drinks and hope that they would then buy more. Hoffner Lovgren and Rohland both seemed willing to do so.

“I rarely only drink one beer,” Roland said after collecting a free drink at Carl’s Ol & Spisehus in a Copenhagen suburb.

Drinkers elsewhere are now in line. France became the latest country on Tuesday to allow bars and restaurants to operate after the Netherlands on Monday. Ireland and Belgium are expected to follow later this month, with Britain in July.

Julian Marsili, Carlsberg global brand director, said its campaign would even continue into the summer.

“Travel will not be massive, at least outside Denmark, so we are encouraging people who want to adopt kegs to explore Denmark further in bars in the tourist places,” he said.

The schemes have helped, but not made up the shortfall. In Britain, the British Beer and Pub Association (BBPA) said pubs could have recorded their best April in a decade, selling 745 million pints in unseasonably warm and sunny weather.

The issue is acute for brewers, with about a third of beer typically consumed in pubs, bars or cafes. In value terms, that can rise to 60-65%, according to Pierre-Olivier Bergeron, secretary general of the Brewers of Europe.

Beer sales in stores have risen, but well below the rate of wine and spirits and not enough to make up for the loss of on-premise drinking, according to U.S. data from marketing research firm Nielsen.

Reopened bars and restaurants will clearly not operate as they did before the coronavirus closures, with limited time at the bar or table service, shorter hours and measures to minimise contact between staff and customers and to keep customers apart.

Emma McClarkin, BBPA chief executive, said the social distancing gap made a big difference. Two metres, currently used in Britain, might only allow only a third of Britain’s 47,000 pubs to reopen while a one-metre rule, deemed safe by the World Health Organization, would allow 75% to operate, she said.

Brewers have also been helping with some of the new hardware involved and learning from China, where restaurants and bars reopened from March.

Craps said the kits were being replicated in many other countries, such as the Americas where the brewer has its largest markets.

A study for the brewer of British pub-goers found 93% were keen to revisit their local and over a third intend to visit within a week of reopening. A majority also wanted to keep 2 metres away from strangers.

Business will not resume as before. Belgian cafe and restaurant owners expect on average 45% fewer customers as a result of social distancing measures and consumer wariness.

“It’s not a back to normal situation… establishments now reopening will be reopening under pretty special conditions,” Bergeron said.