Home
Stocks
Kelley Blue Book: Can you compare an Aston Martin Vantage to a Porsche 911 Carrera S? We did
Prev Article Next Article
This post was originally published on this site

Comparing the 2020 Aston Martin Vantage ARGGY, +0.29% and the 2020 Porsche 911 Carrera S might be as challenging as discussing the merits of a Caribbean sunset versus a snowy alpine landscape. However, we’re gladly taking on the task. The winding roads high above the Pacific Ocean in Malibu, California are calling. These two sports cars are eager to answer. 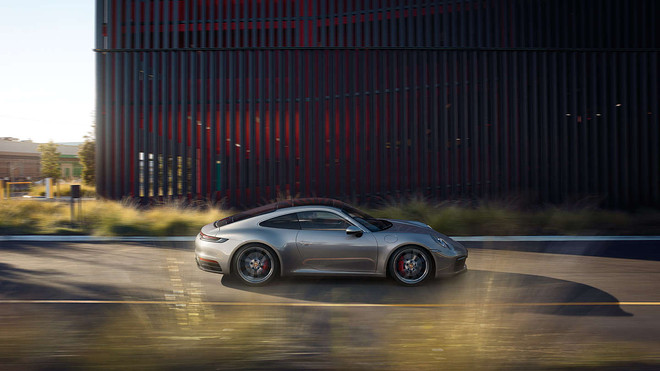 How much do the Aston Martin Vantage and Porsche 911 cost?

The Vantage sports a longer wheelbase, 106.5 inches to the 911’s 96.5 inches, and carries about 250 pounds more weight – the Vantage tips the scales at around 3,650 pounds and the 911 closer to 3,400. The Vantage also requires a bit of a fatter wallet, with a base price of $156,000 to the Carrera S’s more conservative $114,650. For those at home with calculators, that means England’s fun machine costs about $43 per pound of pleasure. The land of lederhosen and Octoberfest’s closer to $34. Broken down that way, both seem perfectly affordable, no?

Well, don’t let that smaller 911 dollar number fool you. For anyone familiar with Porsche’s POAHY, +3.19% outrageous option sheet you know the Carrera S comes much closer in price to the Vantage once you tack on, say, Porsche Dynamic Chassis Control (PDCC) and rear-axle steering ($5,260), and the Sport Chrono Package ($5,460). Shopping for the same standard trappings you get in the Vantage such as leather trim ($1,260), a faux-suede headliner ($1,360) and a 360-degree camera ($1,430) closes the gap. And now you can get a Vantage at a $50,000 discount from the previous generation’s bottom line price. The hit your wallet takes for the James-Bond-approved whip feels negligible.

Related: How to choose trim levels and options when buying a new car

Objectively, both the elegant British brute and classic German standard-bearer offer a head-turning visual experience. The Vantage displays its overt ferociousness at first glance. The wide-open grille that sniffs low to the ground, its squinty catlike headlights, and the muscular shoulders and haunches make it look mid-stalk before you get within 10 feet of the doors. At the same time, its curves appear elegant and liquid, like a bias-cut silk dress.

Half a century and a couple of growth spurts away from the original icon, the 2021 Porsche 911 maintains its classic shape and styling. However, its understated mien isn’t to be underestimated. Eyeballs falling on a 911 unmistakably know what they’re taking in, German automotive engineering at its zenith. There’s a reason this timeless model has lasted as long as it has.

The 2020 Aston Martin has redefined the “cockpit cabin” in the Vantage by putting the driver as close to the center of the car as engineering allows. This seating position makes for improved driver/car connection and visibility. However, despite its lux fit and finishes, inside the Vantage is already starting to feel dated. The center stack, while intuitively laid out, comprises previous-generation Mercedes-Benz switchgear and lots of it. In the tech department, graphics on the Vantage’s navigation system (another Mercedes throwback) appear previous-previous-gen. Several new roads around our office don’t even register as being in existence.

By comparison, the 992 Carrera S catapults Porsche into the future with a 10.9-inch touchscreen, minimal buttons, and knobs, except for the essentials such as HVAC, volume, seat heaters if you opt for them. Haptic feedback from what buttons do exist lets the driver know they’ve done something without having to take their eyes off the road. Porsche’s navigation and infotainment system climb the top of the pyramid for user-friendly interaction. Both navigation and Apply CarPlay are standard on the 911.

Porsche’s seats count as some of our favorites in any car available on the market today, and the interior is festooned with heritage call-backs such as the gauge cluster. One ding here, in certain positions the steering wheel obscures the speedometer and other gauges. Not ideal.

Under all the 2020 Aston Martin Vantage’s sexy British sheet metal pulses a Mercedes-AMG Biturbo V8 specially tuned to Aston Martin’s standards, helping slingshot the Vantage to 60 mph from a dead stop in 3.6 seconds. Its 503 horsepower and 505 lb.-ft. of torque launch the Vantage to a top speed of 195 mph.

By comparison, Porsche’s 3.0-liter turbocharged flat-six churns out 443 horses and 390 lb-ft of torque at 2300 rpm. Thanks in part to its reduced weight, the 911 also arrives at 60 mpg in 3.5 seconds. Equipped with the Sport Chrono Package the Porsche can squeeze out a 3.3-second 0-60 time according to the Germans.

Also on MarketWatch: What it’s like to drive a Tesla Model Y

Serpentining above the mighty Pacific, the 911 Carrera S’s 8-speed PDK transmission feels more intuitive than a crystal ball. Downshifts, when you even need them, are smooth and seamless. Even through turns, the 911’s torque is pretty accessible through the entire rev range, so picking up where you left off after braking doesn’t require much more than throttle. On the downside, the 911’s new nubbin gear shifter doesn’t live up to the transmission it operates.

The 8-speed automatic on the Vantage doesn’t disappoint either. Throws are quick on the massive paddle shifters, that are easy to find even mid-turn, and shifts feel lightning quick. Both Vantage and 911 models also come with a manual transmission. Porsche’s benchmark gearbox is second to none, and we’re glad that Aston added a dogleg 7-speed to the lineup. Driving purists won’t disagree, plus it reduces weight in the Vantage by 209 pounds, which they’ll appreciate.

There’s so much stiffness in both of these cars someone surely over-starched. Normal suspension settings in the 911 feel more forgiving and easier to live with when highway driving than on the Vantage, which even in its softest setting feels clenched and ready for action. Ratchet both of them up to their high-performance modes and brace yourself. Whether your booty radar is finely tuned or not, in both cars you’ll feel every loose granule of gravel when in Track mode in the Vantage or Sport+ in the 911.

The front-engine friskiness of the Vantage plays in stark contrast to the roaring rear-engine control of the 911. Both cars feel filthy with grip, eager, capable of pushing a driver to the brink and bringing them back again. In the driving dynamics department is where both cars shine in different ways.

Driving differences between the Vantage and 911

With a hyper-responsive chassis, the driving experience feels connected to but doesn’t overpower the driver. Some reviewers have used the word soulless, but we’ll say calculated. Steering on the 911 feels effortless and laser-precise, and even the Carrera S’s standard brakes are just right. If you opt for carbon-ceramic upgrades ($9,860), Porsche’s locked in perfection. They’re powerful but comfortably progressive even at the top of the pedal.

The Vantage, on the other hand, encourages tomfoolery and wants you to lose the rear end just a smidge. Oversteer fan Matt Becker, Aston’s engineering guru who moved over from Lotus a handful of years ago, designed the Vantage to do just that. An e-diff set up, a first for Aston Martin, helps keep those rear Pirelli PZero 20-inch tires in place, but in Track mode, with nannies at their least limiting, you’d better know what you’re doing or be prepared. With the engine weight up front, the rear end purposefully squirts out from under you, making it a blast to flog around a road circuit.

Finessed and fast, the 2020 Aston Martin Vantage is six-figure fun personified. Steering into turns feels sharp and aggressive and down the back straight authoritative. Carbon-ceramic brakes are also available on the Vantage and cost another heart-palpitating $10,000, and while they’re great for the track, they are too grabby in the real world, making easing out of an obstructed driveway a mild whiplash situation.

The road reminds the driver of its presence in either car – the asphalt soundtrack permeating both cabins. Good thing the 911 and Vantage have decent audio systems. Though if you’re in the Vantage you might be OK just listening to its engine note. That AMG-sourced V8 churns out endless audible delights thanks to two gentlemen at Aston’s headquarters in Gaydon, England whose sole purpose in life is to tune the engine note of all Aston Martin cars. While the flat-six certainly makes sweeter music than some other Porsche offerings, the Vantage holds the advantage here.

Mentioning gas mileage numbers in a comparison such as this seems preposterous, but we’re a responsible lot here at Kelley Blue Book. Both Porsche and Aston Martin make it easy as numbers on the Vantage and 911 Carrera S are the same. In the city expect to get 18 mpg and 24 on the highway.

As previously stated, Porsche’s option sheet is the stuff of legend, with every surface slatherable in leather or suede and a grand price tag to go with each upgrade. Aston Martin also plays the customizing game at the next level. Got a purple running shoe you love and want your car to look like it? Just bring it in and it’s done. Every Adidas-colored seam is stitched by hand and the exterior paint job takes 200 hours to complete. Both automakers offer special delivery options at their factories or to your home. We’re sure if you wanted a parade to come with either car that could be arranged.

The 2020 Aston Martin Vantage or 2020 Porsche 911 Carrera S? We wouldn’t be ashamed to post either ride on the Gram if they were ours. So, pick your poison, a composed German force of nature or a posh and rowdy Brit. Both cars will delight and challenge, it just depends on which one you’re up for accepting.

This story originally ran on KBB.com.