Home
Stocks
The Tell: Stock-market bull who called the bounce off March lows says economy bottoming, now sees S&P 500 at 3,250 by August
Prev Article Next Article
This post was originally published on this site

The worst is past when it comes to the economic hit caused by the COVID-19 pandemic, clearing the way for the S&P 500 to continue its climb back toward its all-time high through the end of August, according to a Wall Street analyst who called for stocks to bounce back aggressively just ahead of the market’s March 23 lows.

Read:The Dow is on the verge of crossing an important line in the sand that may signal that a record high is next

Stocks traded at record highs in February, then tumbled into a bear market at breakneck speed as the COVID-19 pandemic resulted in the lockdown of the U.S. and economies around the world. Stocks set at least a near-term bottom on March 23, with the S&P 500 closing 33.9% below its Feb. 19 record high at 3,386.15.

Bannister previously acknowledged being initially “blindsided” by the pandemic but called on March 19 for a stock-market rebound that would see the S&P 500 SPX, +1.48% rally back to 2,750 by April 30. On April 18, as the index hit his mark, he raised that target to 2,950, but warned that gains beyond that level could be difficult to come by. On April 30 he left his target unchanged, arguing it would likely take another shock, inducing the Federal Reserve to step in with additional stimulus, to fuel another leg higher.

In his Wednesday note, Bannister said that after a month of roughly sideways action, the degree of monetary stimulus by the Federal Reserve and fiscal measures by the government have proven crucial to keeping the market supported, while the recent surge for stocks may signal a positive inflection for gross domestic product in the third quarter, which could boost earnings per share, or EPS, in 2021.

But the 3,250 target also reflects an expectation of a “normal” expansion of the P/E ratio that would offset the fall in EPS.

And while Wall Street earnings estimates for the S&P 500 have fallen sharply, a fall in the real, or inflation-adjusted, 10-year Treasury yield since June of last year has supported the P/E ratio, he said. 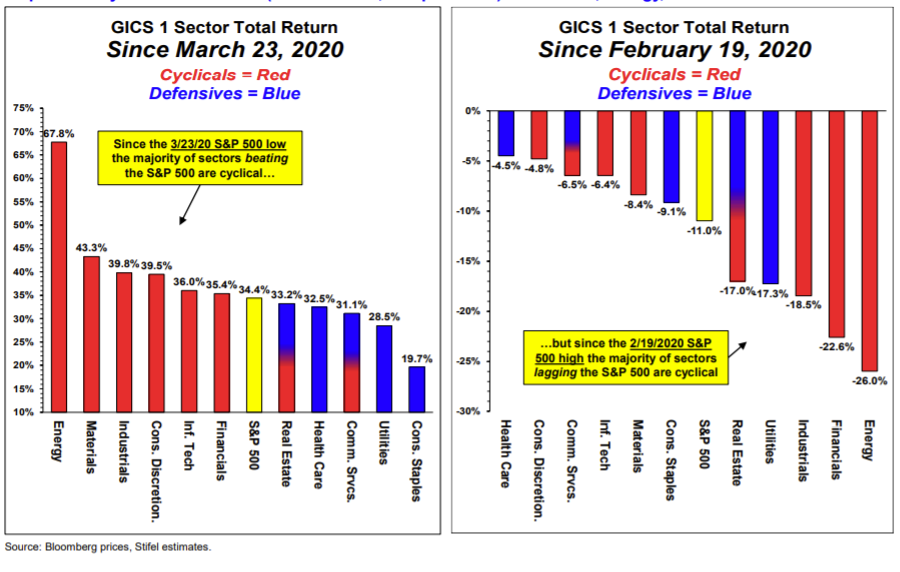 Bannister noted that, measured from the March 23 low, cyclical sectors are the top performers. But measured from the Feb. 19 high, cyclicals are the weakest (see chart above). “With room to run, our GDP optimism favors cyclicals, particularly a turn in reflation (weaker dollar, steeper curve): financials, energy, materials and industrials,” he said.