Home
Stocks
No, America’s billionaires didn’t get $434 billion richer during the pandemic — quite the opposite, in fact
Prev Article Next Article

Americans for Tax Fairness and the Institute for Policy Studies released a report showing a startling statistic: America’s billionaires got $434 billion richer amid the pandemic.

“The surge in billionaire wealth during a global pandemic underscores the grotesque nature of unequal sacrifice,” said Chuck Collins, one of the study’s co-authors.

Billionaire wealth may well be grotesque, but a sensible way of looking at the underlying data would lead to the conclusion that America’s richest individuals lost wealth during the crisis, not gained it.

The study, picked up by media outlets including CNBC and Forbes, examines billionaires’ wealth between March 18 — the rough start date of the pandemic shutdown, when most federal and state economic restrictions were in place — and May 19. It relied on the Forbes’ billionaire list, which itself is built around stock-market performance. 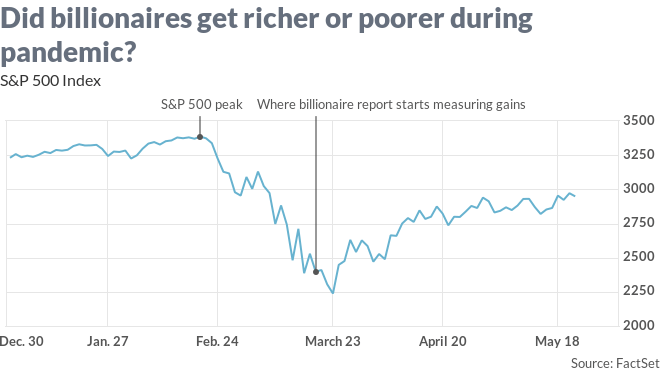 A more logical way to think about whether billionaires got richer, or not, is to think about the performance from the Feb. 19 peak in the market, after which more investors began to get concerned by the novel virus. You then get to see who got richer even in the face of the crippling economic blow.

The real answer is, not many have. MarketWatch ran the numbers from the peak and, in the interest of time, only used the top 50 billionaires. MarketWatch also took the cheat of using the S&P 500 SPX, -0.36% for billionaires with private interests rather than Forbes’ more complex method. (Also, MarketWatch didn’t look at stock purchases during the month.)

Cumulatively, the top 50 billionaires lost $232 billion between the market’s peak and this Tuesday. If the remaining billionaires on the Forbes list lost wealth at the same roughly 12.5% rate that the top 50 experienced, that’s another $200 billion–plus wiped out.

Jeff Bezos of Amazon.com AMZN, -0.09% did get richer, by $13.5 billion. Bezos and Amazon have been big winners as people across the world rely on the service for an ever-increasing percentage of their consumption.

The Walton family, with their stakes in retail behemoth Walmart WMT, -0.79%, also were winners. Jim, Alice and Rob Walton each made about $3 billion during the Feb. 19–to–May 19 span.