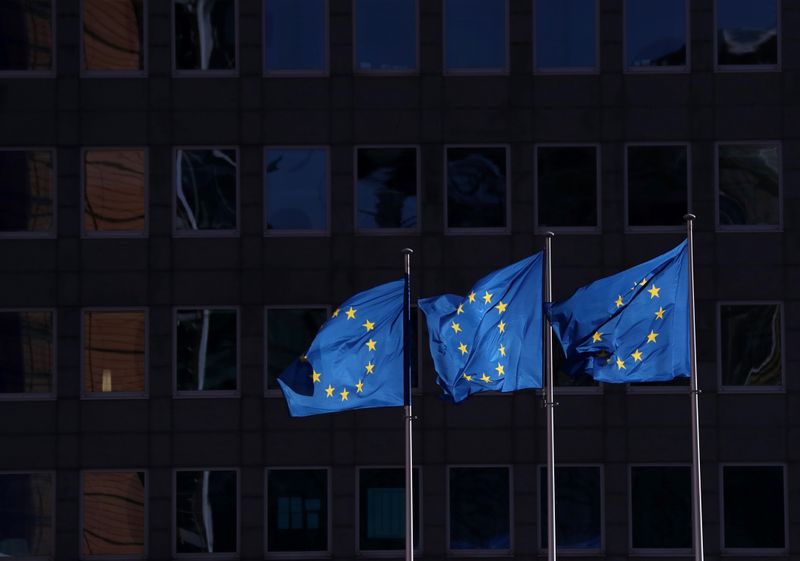 LONDON/FRANKFURT/BRUSSELS (Reuters) – EU officials are seeking to finalise a plan for public stakes to be taken in key European companies to shield them from the economic fallout of the COVID-19 pandemic, three sources familiar with the matter told Reuters.

The European Union is looking to take decisive, unified action to support corporates after plans to help struggling southern states became mired in dispute and led to some politicians questioning the future of the European project.

On May 5, after weeks of negotiations, France called for “an equity fund, either to recapitalise or to acquire shares in strategic companies that need capital, especially for those operating in European strategic value chains”, according to a proposal submitted to the EU commission and seen by Reuters.

One favoured option is the creation of a central “solvency support” scheme, funded by member states, to direct investments into companies deemed systemically important, according to the three sources familiar with the discussions.

Another could see European companies issue convertible bonds to the European Investment Bank, the EU’s lending arm, that could later turn into an equity stake, said two of the sources.

A spokeswoman for the European Commission declined to comment.

While all member states have largely embraced the idea of such investment, its governance has proved a stumbling block along traditional fault lines, said the sources who declined to be named as the negotiations are confidential.

Italy and France want the new scheme to prioritise support for companies in countries worst hit by the coronavirus pandemic and economic slump, and with fewer financial resources at their disposal, according to the sources.

But German officials have asked for more visibility on the benefits that Europe’s largest economy will get from ploughing a large chunk of the cash into the scheme, they said.

Much of the detail surrounding any scheme to protect companies – and not just states – is yet to be finalised. A broad announcement on it is expected in the coming days as part of a trillion-euro plan for a recovery fund, the sources said.

The plan to take stakes in companies is inspired by previous proposals backed by France and Italy to strengthen Europe’s “strategic” industries.

Last August, EU officials examined the creation of an EU sovereign wealth fund to invest in European champions in sectors where Europe lags behind global rivals such as technology, according to an internal document seen by Reuters that mentioned stepping up competition with U.S. giants such as Apple (NASDAQ:AAPL) and Google (NASDAQ:GOOGL) as well as China’s Alibaba (NYSE:BABA).

This plan stalled in the autumn, and the wealth fund never materialised. But the broad idea of the bloc investing in major companies was revived by Italian and French officials after the coronavirus hit Europe as a way to overcome the stalemate on debt mutualisation, the sources said.

It was also championed by internal market commissioner Thierry Breton as a way to protect systemically important businesses in Europe and deter any unwanted takeover or stake-building from outside actors.

Concerns over the vulnerability of some European companies grew in April when it emerged that Saudi Arabia’s sovereign wealth fund had amassed stakes in four European oil majors, including France’s Total and Italy’s ENI (MI:ENI).

Another method of investing in companies being examined by EU officials is by making greater use of an agency that takes small stakes in companies, the European Fund for Strategic Investment, to bolster businesses struck by the pandemic, one source said.

Since it was set up in 2015, the fund has made roughly 1.9 billion euros of small investments in companies specialising in life science, renewable energy and digitalisation.

The 27-member bloc is also looking at using its central budget to give guarantees to the European Investment Bank that would, in turn, hand out loans to companies struggling in the slump, another source said.

That would lower the risk for other private investors or a national development bank, which could then grant further credit or take a stake in the company. Such aid would be directed at countries worst hit by the crisis, the person added.

While the idea of public stakes in companies has won broad backing, some experts remain set against it.

“I do not favour the recovery fund taking stakes in companies. I do not favour this French model of sponsoring industry,” said Lars Feld, chairman of the German government’s council of economic experts that advises the chancellery, finance ministry and economy ministry on policy.

The nature of the scheme – whether permanent or temporary – is also a key point of contention, the sources said.

Germany wants certainty that any temporary measure would grant an immediate payback when assets are sold, one source said, depending on how much each member state has contributed to the scheme.

France and Italy hope that the scheme can be beefed up over time to build European champions and protect key industries, said one source.

Despite the divisions, negotiations are progressing amid pressures from German, Italian and French industry lobby groups which recently called for a unified European effort to support businesses in trouble.

“No European company should fail because of lack of support,” they said in a joint statement.