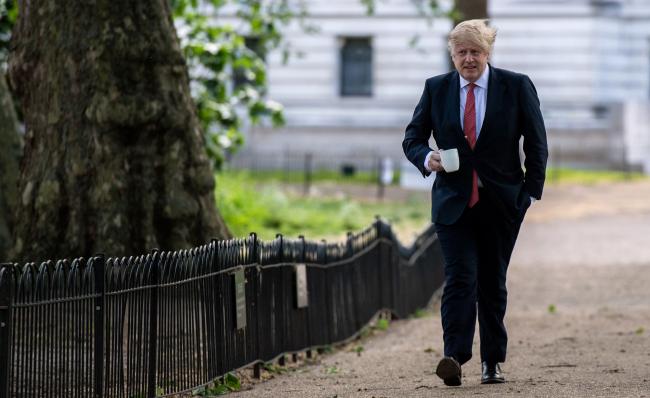 With every day of lockdown making it harder to salvage a stricken economy, companies are looking at how to keep workers apart on factory floors and on building sites. It comes after Johnson told people who can’t do their job from home to return to their workplace, though to avoid public transportation, maintain social distancing and wear a face covering in enclosed spaces.

Yet the response from business groups and unions wasn’t encouraging as concerns remain over the threat of the coronavirus. Some have told members to stay put until safety issues have been addressed, undermining the message that the U.K. is about to emerge from its economic stupor.

Britain has recorded almost 32,000 deaths, the most in the world after the U.S. A study of fatalities by the Office for National Statistics published on Monday found that low-skilled construction workers, security guards, bus drivers and chefs were among the most at risk.

Johnson’s government is already under fire for being slow to act on the virus threat. Now the complaints are of mixed messages, unclear guidance and rules that don’t apply to the entire country.

Scotland broke with London last month on how to manage a return to normal business, setting out its criteria in documents while the U.K. government balked at making any public statements. First Minister Nicola Sturgeon, who runs the administration in Edinburgh, said the “stay at home” message would continue in Scotland.

The government has promised to provide detailed guidelines to different types of companies on how to adapt to make sure they are “Covid secure.” The papers are expected to be released later today, Johnson said. A separate document outlining arrangements for public transport is promised for Tuesday.

Without more information on how to keep staff safe, it would be foolish for any business leader to encourage non-essential staff to return, said Richard Burge, chief executive of the London Chamber of Commerce and Industry. “My strong and unequivocal advice to London businesses is not to change your plans” for now, Burge told the body’s 2,000 members earlier.

Businesses are clamoring for advice on everything from whether factory workers can be less than two meters apart to what standard of protective equipment they should buy, and how to procure it without causing shortages in the National Health Service.

Nissan (OTC:NSANY) Motor Co. said it has no plan to bring forward a restart to production at the country’s largest car plant from early June. Honda Motor Co. expects to announce a date for its Swindon assembly plant not before Wednesday, said a person familiar with the company’s plans.

The situation is bleaker for pubs and restaurants, where social distancing is harder to enforce. Johnson said some hospitality venues might be able to open doors to customers from July.

“They’re obviously going to be bigger ones like hotels and it’s going to be a bit of a disaster for us,” said Chix Chandaria, 51, who owns the Wine Parlour bar in Brixton, south London. “We’re hoping we can reopen the business, but we won’t be able to if we have to let our team go because we have no income.”

Retailers took issue with the government’s plan to allow smaller stores to open first. British Retail Consortium Chief Executive Helen Dickinson said stores should reopen when they can do so safely, not based on their size.

Shops in local areas are likely to reopen first, and that’s bad for stores in city centers that need lots of shoppers as they have the highest rents to pay, said Alistair McGeorge, non-executive chairman of New Look Retailers Ltd, the fashion chain.

“I worry about city centers in the long term as there will be fewer travelers and fewer office workers as more people work from home,” said McGeorge.

Companies have spent the lockdown trying to redesign office plans and manufacturing processes to keep their employees at a safe distance. What they can’t do is prevent infections while traveling to work in crowded public transport or eliminate every risk on site.

Even if no one falls sick, some managers worry the tiniest lapse in health guidelines will leave them exposed to costly litigation.

“It’s vital that the guidance is clear so that companies can plan how to return safely,” said Jonathan Geldart, director general of the Institute of Directors. “As people with ultimate legal responsibility, directors need to have confidence that it’s safe, and that if they act responsibly they won’t be at undue risk.”

There was some signs that Britain’s workforce was heeding Johnson’s “back-to-work” message as the week began. Traffic was noticeably busier and there were more pedestrians on the street as people took on board the government’s advice to avoid public transport where possible.

However, London Bridge Station, where peak hour commuters regularly have to queue to get onto the subway, was almost empty and workers tried to respect social distancing rules. The Jubilee underground line was quiet, with people spread out, as was the District line heading west to the City financial district.

Construction workers were back on site at Admiralty Arch, a luxury hotel project. In the City, piling was underway at 40 Leadenhall Street, an office project nicknamed Gotham City.

Some workers from utility firms and construction firms were ignoring the social distancing advice and huddling outside the sites, and use of masks was still the exception rather than the rule.

Aware of Britain’s stringent laws on workplace health, the National Union of Rail, Maritime and Transport Workers urged members to “refuse to work” where safety is compromised.