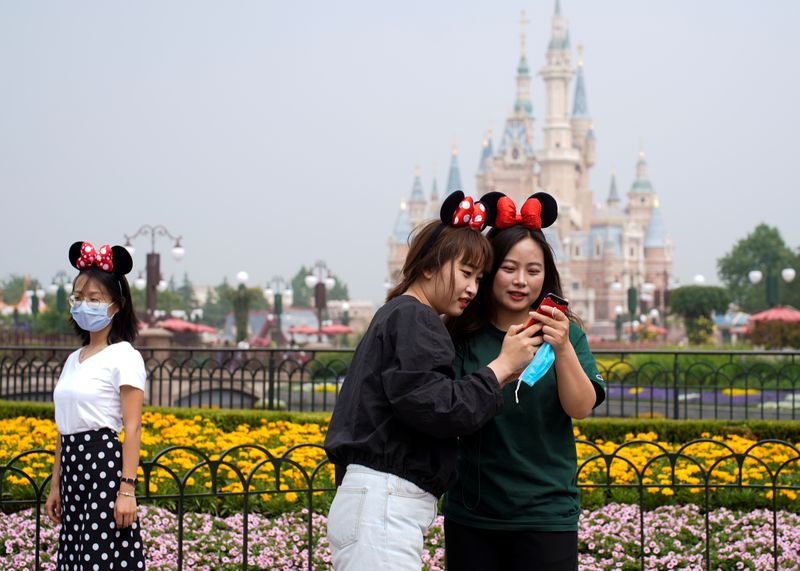 SHANGHAI (Reuters) – Thousands of visitors streamed into Shanghai Disneyland on Monday for the first time in three months as the Chinese park became the first reopened by Walt Disney Co (N:DIS) after the coronavirus pandemic brought the Magic Kingdom to a standstill.

While Mickey Mouse joined familiar Disney characters welcoming the crowds, the Shanghai experience will not be as it was: Instead of parades and fireworks, there are mandatory masks, temperature screenings and social distancing for visitors and employees.

Among the crowd on Monday was Shanghai Disneyland passholder Kay Yu. “I think (these measures) make tourists feel at ease,” said the 29-year-old, who was wearing a Minnie Mouse hat and said he had woken up at 4 a.m. to make the trip to the park.

Disney’s $5.5 billion China flagship is the first of its six resorts around the world to reopen after the pandemic that has now killed more than 280,000 people globally threw consumer service businesses around the world into turmoil. The reopening may provide a glimpse of how Disney can begin to recover from closures set to strip $1.4 billion from the company’s profit.

But the limited scope of the reopening in Shanghai underlines the scale of that task: While it welcomed more than 10 million guests in its first year after opening in 2016, the park will now restrict visitor numbers to 20% of daily capacity, or about 16,000 people – far below a level initially requested by the Chinese government.

Still, the vast majority of its rides as well as most of its restaurants and shows will be open, said Andrew Bolstein, the park’s senior vice-president of operations. More might reopen in time to come depending on the situation and government regulations, he added.

Zhang Zhongyu, a 29-year-old passholder and visitor who works in importing, said the things he missed most about the park were the shows and the parade – two attractions that have been cancelled.

“I’m a little disappointed, but there’s nothing we can do – thinking of the virus, you have to avoid guests gathering closely, it’s understandable,” he said.

Visitors holding annual passes are being asked to reserve an entry time and day in advance, and tickets for the earliest days of Shanghai Disneyland’s re-opening have been sold out.

Monday’s guests, mostly parents with children or young couples, were greeted by waving park staff as they walked in, having been asked to show a green health code on their mobile phones before being allowed in. All wore masks.

Markers have also been added to areas where people might congregate, such as shops and entertainment areas, to tell visitors where and where not to stand, while audio announcements regularly remind guests to maintain social distance. Visitors on rides are also asked to sit well apart.

“For us fans it’s very meaningful to be here on the first day of its reopening, and to be able to experience its reopening, it feels like a magical day.”

Still, the reopening comes after a weekend of unwelcome reminders that a second wave of the virus could happen, including the first confirmed case for more than a month in Wuhan, the city at the epicentre of the outbreak late last year.

The number of new cases in China, where the epidemic first emerged late last year, has sharply dropped in recent weeks but sporadic outbreaks continue. Some 17 new COVID-19 cases were reported for the mainland on May 10, rising from a day earlier and marking the highest daily increase since April 28.

Concerns about the virus weren’t far from the mind of Shanghai Disneyland visitor Chen Xue, 31, who works in marketing and said she would have not come to the park if it were not for the social distancing measures.

“The virus is still not over and it has made me so incredibly anxious,” she said.