Home
Stocks
Outside the Box: These 2 maps sum up what your coronavirus purchases say about how you vote
Prev Article Next Article
This post was originally published on this site

In uncertain times, it is not uncommon for individuals to react in surprising ways through consumption — and the COVID-19 crisis is no exception. As the coronavirus pandemic progressively touched countries one after the other, ample media coverage revealed flocks of U.S. consumers rushing to the stores to stock up on goods seemingly unrelated to the disease — in particular, to get toilet paper… and guns. Why such a rush for these toilet paper and guns?

At the most basic level, a number of experts have suggested that as consumers feel increasingly threatened by the virus and experience a loss of control, they look to purchase goods that meet their most basic human needs and effectively address them.

A finer level of analysis of social sciences research however, suggests that this consumption response is not necessarily knee-jerk or an irrational reaction. In fact, studies show that when threatened, people tend to become more selective and will turn toward identity-rich products that can symbolically or effectively restore their sense of self.

Put simply, facing a crisis provokes a threat to our identity and triggers us to look for products that can help restore the parts of our identity that are threatened. For instance, one well-known experiment found that consumers who momentarily lost confidence in their intelligence (for example, after failing a test) were more likely to buy a fountain pen over a candy bar, because the former, but not the latter restored their confidence in their own intelligence.

Curious as to whether the COVID-19 crisis posed a similar threat to identity and prompted consumers to turn — at least partly — toward identity-reaffirming products, my research assistant Yejin Park and I looked at reactions in the U.S. among Democratic and Republican states.

Being Democrat or Republican reflects a unique identity. While Democrats tend to like change and innovation, Republicans tend to like the status quo. For instance, conservatives tend to prefer familiar to unfamiliar music and favor established brands over nameless or new brands. As a result, one should expect Democrats to react to COVID-19 by preparing themselves for the unknown and durable change (for which hoarding toilet paper makes sense). In contrast, Republicans should react to COVID-19 by taking defensive actions and turn toward means that can preserve the status quo.

We focused on guns and toilet paper given consumption of these two products had been among the most covered in the media in relation to COVID-19 the epidemic (respectively 46,900,000 and 35,200,000 entries as of April 22, according to Google News data).

Leveraging daily Google search data in the US, we computed state-level correlations between queries for “COVID-19” and two of the top words searched and covered in the media “toilet paper” and “gun” over the two-month period between Jan. 14 and March 13.

The correlation measured the extent to which the search volumes for the target words changed in a similar way and exhibited similar patterns. To illustrate, a correlation of 1 between “COVID-19” and “gun” indicated that when the number of searches for “COVID-19” increased by, say, 20%, the searches for “gun” increased in the same proportion and at the same rate during this period. We measured political ideology — Democrat or Republican — by using state-level voting behavior in the 2016 presidential election. 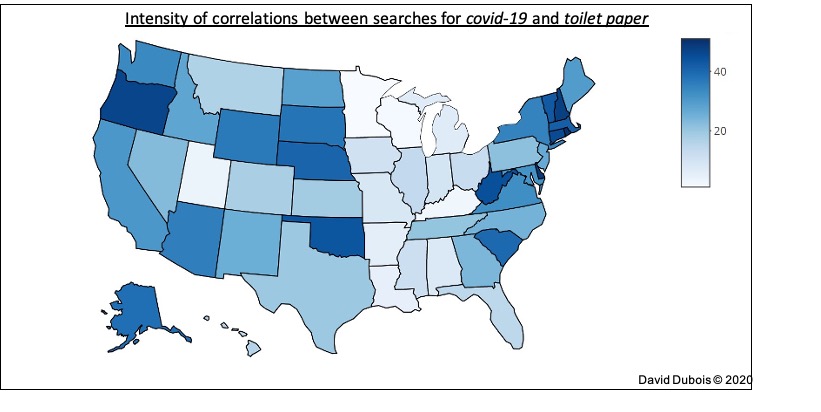 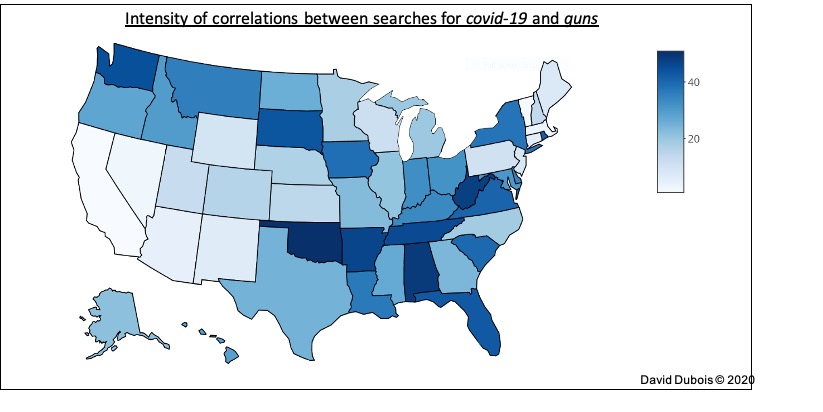 These findings show that consumers’ response to the current health crisis is not (entirely) irrational. Rather, consumers tend to strategically turn toward products that reaffirm their identity.

Republicans are more likely to purchase guns because the idea of preserving the status quo and defending themselves is an important part of their personality. These findings echo reports that Americans have been buying guns in record numbers as virus fears spread. For instance, a New York Times analysis showed nearly two million guns were purchased in March, the second-highest month ever for gun sales.

In contrast, Democrats turn toward toilet paper because they are anticipating the change in lifestyle and are preparing for a long lockdown.

These findings underscore how different parts of the U.S. think and react in ways that strengthen deep-seated consumer identities and bear important implications for the medium term. Using a similar approach, companies can better understand consumer responses to the crisis, and turn their efforts to push identity-rich products that reaffirm consumer identity and/or develop lower cost solutions for consumers to respond to identity-threats. For instance, Apple’s recent launch of the iPhone SE at a lower cost is likely to strengthen its relationships with consumers during times of hardship — something that consumers are likely to remember positively once the crisis is behind us.

Similarly, public institutions such as governments can use analytics to unpack potentially negative consequences of the pandemic and associated measures, such as the lockdown. For instance, they may analyze when, where and how consumer searches for alcohol, drugs or similar unhealthy behavior increased most during the pandemic and adjust their public health message and actions to back up consumer health.

The COVID-19 pandemic is a global crisis and the forms and shapes which identity-reaffirming consumption take may differ across countries and languages. Only by uncovering how consumers react locally — and limiting potentially self-destructing consumption behavior — will we prepare the foundations of a stronger post-crisis consumption world.

David Dubois is a professor of marketing at Insead in Singapore.