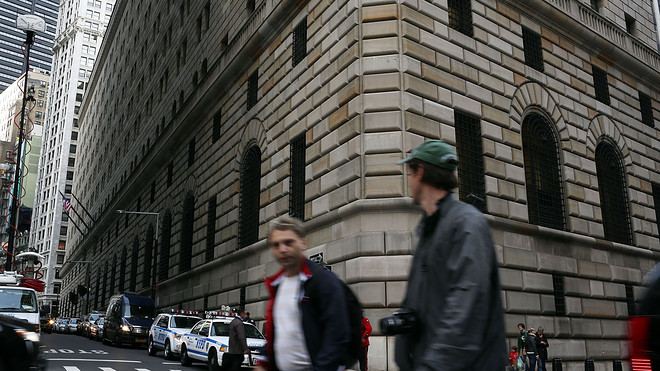 The headquarters of the New York Fed in lower Manhattan. The regional bank is leading the central bank’s effort to calm debt markets and keep credit flowing in the economy rocked by the coronavirus pandemic.

The numbers: The Federal Reserve’s balance sheet expanded to a record $6.6 trillion in the week ended April 22, an increase of $205 billion from the prior week, the central bank said Thursday.

Swap lines to central bank counterparties rose $31.4 billion to $409 billion in the latest week. These facilities help ease demand for dollars by foreign banks and firms.

Big picture: The Fed’s balance sheet is likely to peak at $9 trillion in early or mid-June and then slip to $8 trillion by the end of the year, said Roberto Perli, a former Fed staffer and now analyst at Cornerstone Macro. The central bank is trying to insulate as large a swath of the debt market as possible from the effect of the COVID-19 pandemic, which caused a massive wave of selling as investors scrambled to safe assets. The goal is to keep credit flowing to households and businesses.

Market reaction: The yield on the 10-year Treasury note TMUBMUSD10Y, 0.608% declined slightly on Thursday to yield 0.613%. That is the fifth-lowest yield this year.