Home
Stocks
FA Center: These beaten-down stocks should be big gainers, but investors aren’t in a bargain-hunting mood
Prev Article Next Article
This post was originally published on this site

Value has not outperformed growth since the bull market high on Feb. 19. You might not think that particularly noteworthy; value has been lagging growth for much of the last decade. What’s another couple of months?

In fact, it’s significant: One of the strongest arguments from the value-over-growth camp had been that value would finally have its day during a bear market. It hasn’t worked out that way so far. Value has lagged growth since the bull market high on Feb. 19, as you can see from the chart below. 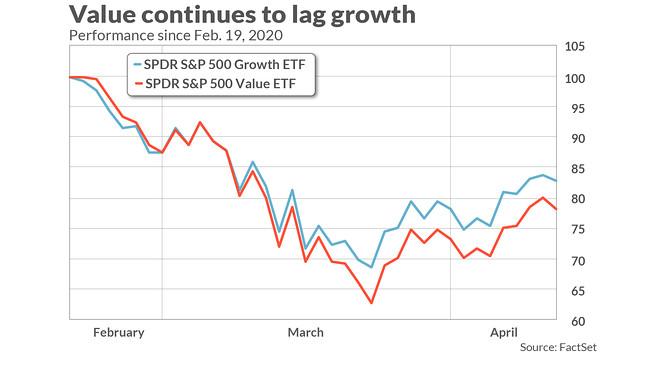 By “value,” I am referring to the investing strategy that favors stocks trading for low ratios of price/book value, price/earnings, and price/sales, among other similar measures. Growth-stock investing, in contrast, favors stocks that are trading for high such ratios. From 1927 through 2019, according to data from Dartmouth professor Ken French, the 20% of stocks closest to the value end of the spectrum outperformed the growth-stock quintile by an annualized average of 3.5 percentage points.

It’s certainly understandable why value’s adherents had such high hopes for this bear market. During the bull market that just ended, they argued, growth stocks were made artificially attractive by the presence of what some referred to as the “Fed Put” — the implicit guarantee that the Federal Reserve would make sure the economy never slipped into a recession. Since the biggest risk facing growth stocks is that they would stop growing, the Fed Put made growth stocks’ performance relative to value stocks stronger than it would have been otherwise.

The implication of their line of reasoning was that, when a recession did finally occur, growth stocks would come crashing down, and value stocks would reassert their historical dominance.

This is precisely what happened following the bursting of the internet bubble, for example, which took place following a decade in which value had lagged growth: Many of the companies that led the market higher in the 1990s were those with few assets and no earnings. In the first month following the bursting of that bubble, value reasserted itself with a vengeance — outperforming growth by more than 13 percentage points.

The contrast with value’s performance over the last six weeks is stark. Vincent Deluard, Global Macro Strategist at INTL FCStone, acknowledges that value’s disappointing performance since the Feb. 19 highs “has been especially painful” for those who have been betting on value’s resurgence. He nonetheless argues that it is nevertheless “justified on a fundamental basis.” That’s because, “by definition, value stocks have high earnings yield and low- or negative growth: as a result, they derive most of their value from the near future.” That means they are especially sensitive to the impact of the pandemic.

Adds Deluard: “On the other side of the valuation spectrum, growth stocks should fare better. As an extreme example, a biotech firm with no revenue should be almost unscathed; its only loss be a small delay in its drug development timeline, which may not be that significant if staff can work from home. Well-capitalized growth stocks with strong long-term prospects are a safer place to weather the storm.”

Read: Why Goldman Sachs’ bullish turn is bearish for stocks

Others have argued that the reason value hasn’t asserted itself as expected is that the Fed Put actually became stronger in recent weeks. That’s because of the massive government stimulus programs that passed Congress and which have been implemented by the Federal Reserve.

At the same time, he continues, value stocks “will be pushed down,” relative to growth stocks, because the Fed’s willingness to lend money won’t help value stocks. That’s because, Baker argues, “borrowing will not make them grow.”

Robert Rodriguez, however, is less sure of the long-term impact. Rodriguez is a former portfolio manager at FPA, and the only fund manager to win Morningstar’s Fund Manager of the Year award for both an equity and a fixed-income mutual fund. In an email, he stressed the uncertainty of the situation. It’s possible, he said, that the impact of the Fed’s policies may actually hurt growth stocks more than value stocks.

Read: Mark Cuban is moving to cash ahead of what the billionaire sees as another rough stretch for the stock market

The key variable here is the increased uncertainty. The unprecedented degree of intervention in the capital markets means, Rodriguez argued in a recent letter published at the AdvisorPerspectives website, that “there is now absolutely no accurate pricing discovery in the capital markets.” And without such price discovery going forward, it’s anyone’s guess whether value will or will not outperform growth.

The bottom line? Don’t be surprised if value continues to lag growth, despite the predictions and hopes for a comeback.

More: Investment pro who warned of the coronavirus crisis months ago says ‘gut’ tells him ‘a 50% or deeper decline,’ in stock market from the February top likely

Also read: ‘Sell in May and go away’ is a warning to stock investors now more than ever