Home
Stocks
Dispatches from a Pandemic: This Maryland dad is using an old Strat-O-Matic baseball game to teach his son writing skills during their quarantine
Prev Article Next Article
This post was originally published on this site 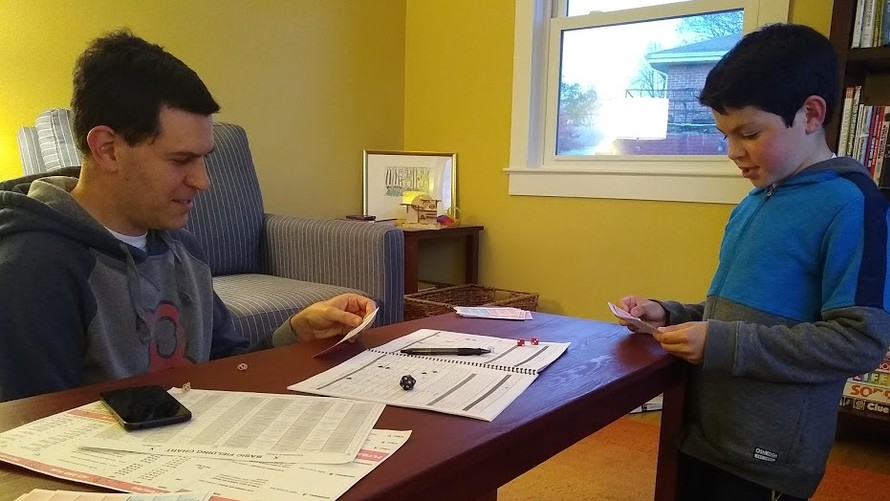 Jonah Rovner is 10 years old and he loves baseball.

“He can’t get enough baseball,” Josh Rovner, a dad from Silver Springs, Md., told MarketWatch. “We are just a big baseball family.”

Major League Baseball was scheduled to begin in late March, but the coronavirus has led to most American sports going on hiatus. Jonah and his dad have been coping with the lack of baseball by playing a lot of Strat-O-Matic baseball — a popular board game invented in 1961 that uses statistics, player ratings and chance to simulate games.

Strat-O-Matic, which sounds like a device a villain would use on his enemies in a cartoon, is numbers heavy, but still simple to learn. Here’s how to play: Each player chooses a team and a starting pitcher from that team. After picking pitchers, it’s up to the dice.

See also: Professional gamblers in Nevada may now be able to collect unemployment

The game action is rolling three dice. The first die dictates which player will consult the batter or pitcher card. The others are to locate the result in the correct column from the card. The card will show whether the player got a hit, struck out, etc., based on player ratings and probability.

This statistics-centered game is recommended for ages 10 and up. Jonah is 10 now and has been playing with his dad since he was six. His dad started playing Strat-O-Matic when he was Jonah’s age.

But the Rovner family isn’t alone. As more and more people spend time at home — and the hunger for any kind of sports increases — sales of Strat-O-Matic have boomed.

Sales of Strat-O-Matic Baseball jumped more than 50% from March 15 to March 31 compared with the same time period in 2019. Sales on Strat-O-Matic’s digital platform also were up over 50% in the same period.

“I understand why it’s happening, it’s just strange with all of the hard things that are going,” president of Strat-O-Matic Adam Richman told MarketWatch. “We are bringing people joy right now which makes us all really happy.”

Jonah has not physically gone to school due to the coronavirus pandemic in weeks. His school in Maryland has given him some “distance learning” packets that only take up an hour or two a day.

Jonah’s dad Josh, a Boston native who sounds jokingly guilty about projecting his fandom of baseball and his beloved Boston Red Sox onto his family, saw his son’s passion for Strat-O-Matic as a learning opportunity.

“My son loves his math classes and he loves his saxophone,” Rovner told MarketWatch. “He doesn’t love writing.”

To work on that, Rovner told his son that after they play a game of Strat-O-Matic, Jonah would then have to write a newspaper article about what happened in their game.

“He’s totally been into it, its been fun for him.”

Rovner says his son’s stories are coming out great. He’s even picked up some traditional sportswriter clichés, describing players as, “just trying to help the team win.”

Strat-O-Matic is taking advantage of its game’s newfound awareness — they are simulating Major League Baseball’s regular season every day on their website. They post box scores and short recaps about what “happened” in today’s games for the starving sports fans out there. Even some newspapers are writing about Strat-O-Matic Games as if they happened on a real baseball diamond.

More time at home during the coronavirus pandemic has allowed the two to play more Strat-O-Matic than they could before. They are playing enough games where they are keeping score sheets about what happened in the previous day’s games.

Strat-O-Matic President Adam Richman thinks Strat-O-Matic can be a good escape for people going through stressful times during the coronavirus outbreak.

“I was just talking to somebody today who said the best hour of his day right now is when he shuts everything out and turns on his computer and he gets to play Strat for an hour.”

Strat-O-Matic might be perfect for families like the Rovners, where players of all ages get to compete.

“It’s a wonderful way for us to renegade old fans of the game, but also engage a whole new generation of players,” Richman explained.

Versions of the game include current MLB players, old stars, and even players from the Negro Leagues.

Rovner is excited to discover baseball’s oldest names with his son during their quarantine.

“I love the fact that he’s learning baseball history,” Rovner says. “There’s no 10-year-old in America who knows more about Eddie Matthews, and George Brett and Cool Papa Bell than my son does.”