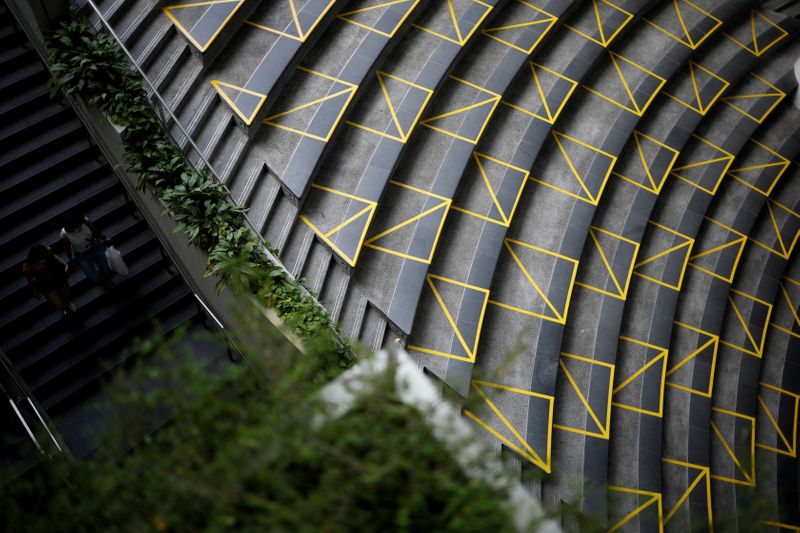 (Reuters) – The U.S. stock market has rebounded swiftly despite a raft of terrible economic news, driven by a massive boost from the Federal Reserve, hopes of a successful reopening of the economy and possible coronavirus treatments, as well as investors’ fear-of-missing-out. But not everyone is buying the bounce.

The S&P 500 (SPX) closed on Friday at 2,874, more than 28% above its recent trough reached on March 23 and just under 18% below its record high close reached on Feb. 19. That rally has been spurred by the U.S. central bank going into overdrive to try to keep the economy from suffering lasting damage, as well as a $2.3 trillion federal stimulus package.

Investors and analysts have turned more positive. Goldman Sachs (NYSE:GS) last week said the unprecedented monetary and fiscal policy actions by the Fed and Congress had “precluded the prospect of a complete economic collapse,” meaning its previous near-term downside forecast for the S&P of 2000 was no longer likely.

Andrew Sheets, a strategist at Morgan Stanley (NYSE:MS), wrote in a research note that the economic downturn “will be more severe, but less prolonged” than the financial crisis, but he expects the economy to hit its low point in the second quarter. If that is the case, Sheets said, “it’s very reasonable that the low for equity/credit prices happens before that.”

The stockmarket has changed its mood swiftly since March 23 – when the S&P 500 dropped as much as 35% below its Feb. 19 peak. But trading has been volatile. Since then the index has closed up more than 1% in ten sessions with its biggest daily gain at 9.4% on March 24. It has fallen more than 1% six times and the deepest cut was 4.4% on April 1.

Other risk assets have also benefited: Junk-rated bonds saw record inflows of $10.5 billion in the week to Wednesday, BofA said on Friday.

The turnaround in optimism comes against an awful economic picture. Data on Thursday showed a record 22 million Americans have sought unemployment benefits over the past month, manufacturing activity in the mid-Atlantic region plunged to levels last seen in 1980 and homebuilding tumbling by the most in 36 years in March. That followed dismal reports of a record drop in retail sales in March and the biggest decline in factory output since 1946.

Some investors are arguing for more focus on fundamentals such as corporate earnings.

“The market’s forecasting can be error-prone and currently there is little mention of head fakes, value traps, potentially impotent policies, and significant later-order effects,” Richard Bernstein, chief executive of Richard Bernstein Advisors, wrote in a report late on Friday. He thinks we are in only the first phase of a bear market.

Bernstein says fundamentals, not short-term technicals or FOMO – meaning fear-of-missing out, “will ultimately determine the direction of the markets.”

Chris Beauchamp, analyst at online trading firm IG, said investors “continue to be confounded by the strength of the rebound in stock markets, which have apparently decided that the coronavirus crisis is receding in intensity.” However, he said that with earnings season intensifying this week, “the rally faces more hurdles.”

Citigroup (NYSE:C)’s chief U.S. equity strategist, Tobias Levkovich, wrote that he worried about “sentiment moving out of panic so rapidly” in what he described as a “somewhat treacherous” and volatile investment environment.

While policy moves like those by the Fed and congressional stimulus programs may deserve big reactions if risks are removed, Levkovich says he is looking at fundamentals and worries about “difficult-to-assess issues such as the potential for second wave infection outbreaks as the economy re-opens.”

Investors have also been reassured by signs U.S. coronavirus cases may be peaking and on Friday stocks were buoyed by a report that COVID-19 patients with severe symptoms had responded well to a drug from Gilead Sciences (O:GILD) even though full trial data for that drug had yet to been analyzed. (N)

Russell Price, Ameriprise’s chief economist, sees government stimulus, reports of virus treatments advances and signs of peaking infections as good reasons for the more positive stock market, but he expects the U.S. economy to take between six and eight quarters to get back to where it was at the end of 2019.

“What’s not fully been embraced is how difficult it’s going to be to get the economy up to speed,” said Price. “What the market doesn’t seem to be appreciating is how long it takes.”

Bernstein argues that if economic progress in China – the first country to report coronavirus cases- is any guide it doesn’t bode that well for the U.S economy in the near term.

“China’s path has been very saucer-shaped at best,” according to Bernstein which notes that the country is about 50 days ahead of the United States in its outbreak and recovery.

Joe Saluzzi, co-manager of trading at Themis Trading in Chatham, New Jersey, is also skeptical of the rally.

“You don’t fight the Fed. You have the momentum people are chasing,” said Joe Saluzzi, co-manager of trading at Themis Trading in Chatham, New Jersey, who is also skeptical of the rally. “Is it fundamentally justified, absolutely not.”