Home
Stocks
Economic Preview: All signs point to deepening recession even as U.S. eyes how to reopen for business
Prev Article Next Article

The hits to the U.S. economy keep coming.

This week’s upcoming reports on layoffs, housing, consumer confidence and the health of businesses are all going to be ugly. Again.

The most timely snapshot of the deteriorating economy has been the weekly tally of the newly unemployed. Initial jobless claims, a rough proxy for layoffs, have increased by at least 5 million for three straight weeks. 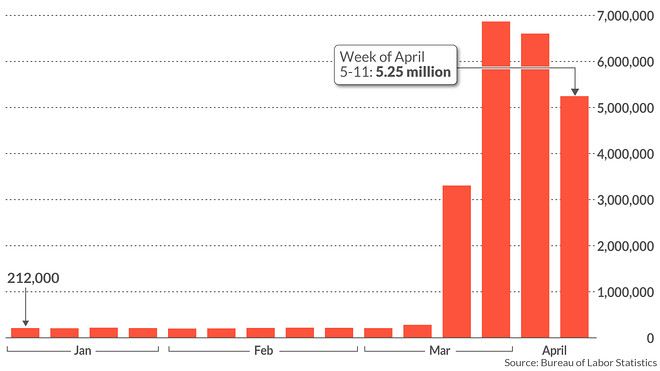 The rush of new jobless claims is expected to “slow” to around 4.5 million in the next update on April 23, but it would push total job losses close to 25 million in the past five weeks.

A back-of-the-envelope calculation suggests an unemployment rate between 15% and 20%. The only other time unemployment was higher was during the height of the decade-long Great Depression in 1933.

“The U.S. economy is hemorrhaging jobs at a pace and scale never before recorded. It compares to a natural disaster on a national scale,” said Scott Anderson, chief economist at Bank of the West.

A pair of surveys of American manufacturers and service-oriented companies, meanwhile, are likely to see activity levels falling to record lows. The surveys are collected by IHS Markit, starting with a preliminary estimate that covers the early part of the month, when the U.S. economy was mostly shut down.

While the service side of the economy — restaurants, hotels, airlines and the like — have been badly hit, manufacturers have done less badly. But not all manufacturers are equal.

Those that make foodstuffs and household goods like toilet paper and macaroni have seen a flood of new sales from consumers stuck at home, but auto makers and companies that make expensive products aren’t faring nearly as well.

Orders for these expensive and long-lasting items, known as durable goods, are likely to post a decline of 10%-plus in March just as the pandemic spread.

Consumers, for their part, have understandably turned quite gloomy.

The second and final survey of consumer sentiment in April will probably show an even deeper slide than the initial reading. The University of Michigan said earlier in the month that its index suffered its biggest-ever drop, falling to 71 from 89.1 in March.

To wrap it up, the sale of new and previously owned homes are both expected to show declines in March, though it’s unclear how deep. The really big crunch only came in the last two weeks of the month.

Whatever the case, the real estate scene is going to look very barren when the April figures come out a month later.

“As ‘stay-at-home’ orders have spread across the U.S. in April, new home sales sites and realtor offices were required to close, demolishing new and existing home sales,” economists at BMO Capital Markets wrote in a research note.