WASHINGTON — Tensions spilled over in a call between the White House coronavirus task force and Senate Democrats on Friday — one lawmaker telling Vice President Mike Pence: “I have never been so mad about a phone call in my life,” a Senate source reportedly told the New York Post.

The call was dominated by questions from Democrats on the government’s testing regime, an intensifying concern as President Donald Trump looks to reopen the economy with only 1% of the U.S. population tested, the Democratic source said.

The administration failed to give a clear answer to the questions, with New York Sen. Chuck Schumer at one point telling them to stop dodging and start providing answers, the source said.

Independent Angus King of Maine eventually lost his patience, telling Pence and the task force that their failure to develop an adequate national testing regime was a “dereliction of duty.”

“I have never been so mad about a phone call in my life,” King said, according to the source.

Trump on Thursday released guidelines for governors on reopening the economy, having backed away from his insistence that he possessed ultimate authority over states’ decisions on whether to resume more normal activities and that governors insistent on making determinations about their readiness on a state-by-state or region-by-region basis were engaged in “mutiny” against him. 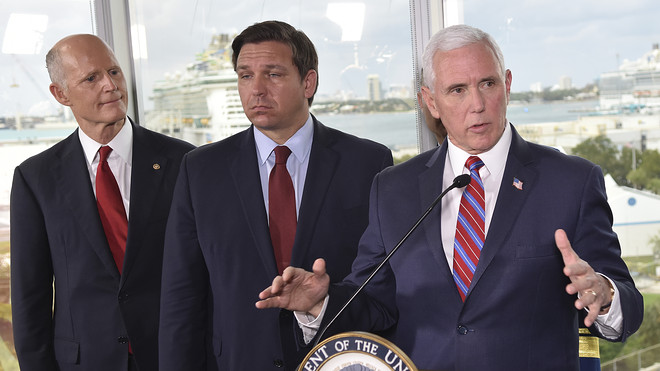 Vice President Mike Pence is joined by Sen. Rick Scott, at far left, and Gov. Ron DeSantis in addressing the media after a meeting last month with cruise-line executives at Port Everglades in Fort Lauderdale, Fla.

Modeling by a University of Washington research institute suggested late Friday that four states, West Virginia, Vermont, Hawaii and Montana, held the potential to be cleared to ease restrictions on personal and business activity as soon as May 4, under certain conditions.

But the guidelines also placed on states’ shoulders responsibility for testing and screening for COVID-19, something many governors, including Andrew Cuomo of New York, believe will be impossible without federal help.

On a call with Trump on Thursday afternoon, many state leaders cautioned the federal government against reopening the economy when they were still facing shortages of COVID-19 testing kits.

A version of this report previously appeared at NYPost.com.