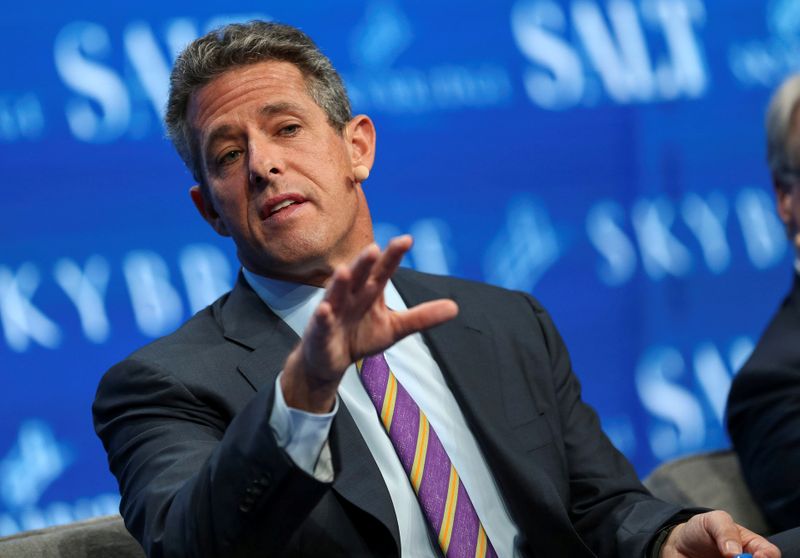 BOSTON (Reuters) – After a calamitous two week plunge in stocks as the coronavirus spread globally, Ricky Sandler called into a midday CNBC show on March 16 with a brash, bullish prediction.

“People are totally missing what is happening here. Every new headline, every new hysteria is making people more nervous and it’s actually very, very positive,” he said, recommending that viewers borrow against their mortgages to buy stocks.

Andrew Sandler, holed up with family, dogs and pet fish on New York’s Long Island, couldn’t resist a shot at his little brother on Facebook (NASDAQ:FB).

The depth and duration of COVID-19’s economic impact is a subject of debate among families the world over. But for Ricky and Andrew Sandler, their diverging views have broader implications: both run multi-billion dollar stock-focused hedge funds.

It’s a scenario playing out across Wall Street. The coronavirus killed off the longest-running bull market in equities, meaning most hedge funds are nursing losses, with the average stock-focused fund down about 9.5% in March and 13% lower for the first quarter, according to data tracker HFR.

To be sure, when markets recover, investors who held or added to their stock holdings may generate large gains, but the timing of such a payoff is uncertain.

Representatives for Andrew and Ricky declined to comment and would not make them available for interview.

The Sandler brothers followed their late father, Harvey, into investment management in the 1990s. Andrew joined the family firm while Ricky set up his own fund. Until recently the brothers, now in their early 50s, worked a few blocks apart in midtown Manhattan offices.

Ricky, a cycling enthusiast who alternates between athletic apparel and power neckties, is comfortable in the spotlight. He routinely appears at gatherings of Wall Street’s elite, such as the Milken Institute’s annual confab in Beverly Hills and Allen & Co’s Sun Valley conference, and sometimes mounts public campaigns against companies.

Self-described as risk averse, Andrew is more low-key, avoiding the hedge fund speaking circuit in favor of tending to a 17,000 gallon basement aquarium.

In contrast to his younger brother, Andrew’s caution meant he missed out on the full market surge of recent years. His Sandler Plus fund gained just 2.75% in 2019, according to an investor letter, compared to a gain of nearly 14% by the average stock focused fund.

That all changed this year. Andrew had positioned his funds defensively, writing to investors on January 16 that “we remain concerned about valuations and downside risks the market seems to be ignoring.”

Andrew was soon reducing market exposure even further, in part because of a rapidly spreading virus in China.

“The Coronavirus could serve as a catalyst for disappointing global growth as well as specifically disrupt certain supply chains and consumer businesses,” the firm noted in a January 28 Lyxor/Sandler U.S. Equity Fund report.

Andrew’s positioning was ideal when stocks started their rapid decline in late February: his funds had more bets on stocks declining than on them rising that month, according to a February 25 Lyxor report.

It also noted increased bets on healthcare stocks and a reduction in consumer discretionary businesses, which have been particularly hard hit as governments curtailed economic activity to prevent the spread of the virus.

Andrew’s Sandler Plus funds surged approximately 9.5% in March, putting its year-to-date performance at nearly 15%, according to an investor update reviewed by Reuters.

On March 16, the same day that Ricky took to CNBC to talk up the markets, Andrew warned a friend that he was not surprised by 1,000 point single day declines for major stock indexes. “Going to be more. Stay liquid my man. This is fucked up,” he wrote on Facebook.

Ricky came out of 2019 optimistic. As U.S. stocks surged, Eminence’s main hedge fund gained 21% in 2019 with a bullish net portfolio exposure of 47% in July, according to Institutional Investor.

Eminence’s exact positioning in late February was not available, but by the time Ricky went on CNBC in mid-March, his fund had suffered losses of more than 30%, according to an investor with direct knowledge of the performance.

Reuters could not determine if Eminence has changed its investment strategy since the end of the first quarter; a representative for the firm declined to comment on that or recent performance.

Ricky was still bullish and predicted a 10% stock market rise from current levels by the yearend in an April 7 video discussion hosted by the University of Wisconsin.

Major U.S stock indices have risen between 7% and 12% since the beginning of April.

It’s not clear how much the Sandler brothers discuss the markets. But on March 20, a long-dormant Twitter account under the name Ricky Sandler responded to criticism of his CNBC appearance earlier in the week.

“Those who think I am an idiot take heed,” he wrote. “This is the buying opportunity of a lifetime.”