Several emerging market central banks are embarking on a radical new experiment — buying bonds in a manner similar to the quantitative easing programs first started in the U.S., Europe and Japan.

Central banks in Indonesia, Poland, Romania and South Africa are among those in emerging markets that have started to buy government debt, a striking move for monetary policymakers that have historically struggled to ease financial conditions when their growth prospects soured or their markets fell out of favor.

The diversity of the asset-purchasing programs across emerging markets make it difficult to simply categorize the response of their central banks as traditional quantitative easing, or the purchase of longer-dated government bonds to lower long-term interest rates.

Though some are doing just that, others are temporarily acquiring bonds to flush cash back into their financial markets, as shown in the table below. 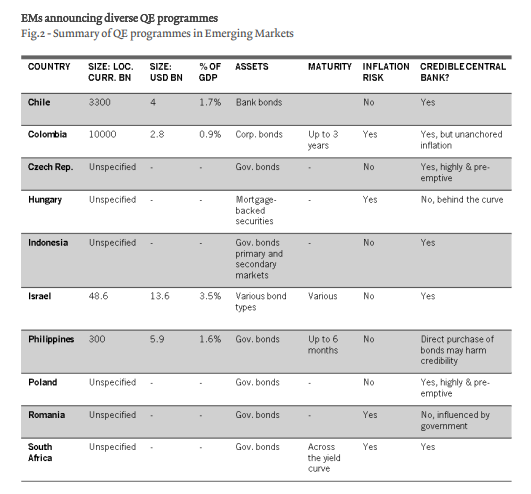 With only a few central banks publishing the amount of bonds they intend to purchase, the scale of bond-buying in emerging markets is expected to pale compared with those conducted by more established central banks like the Federal Reserve.

EM central banks have already lowered interest rates to cushion the economic shock from the COVID-19 pandemic and are running into the same conundrum as policymakers in developed markets — finding ways to loosen the credit spigots when interest rates are close to their floor.

Part of the worry is that investors tend to flee away from emerging market economies when they fall out of favor. This restricts the amount of room central banks in emerging markets have to ease monetary policy to combat an economic shock.

When capital flees from an economy, it can result in a sharp depreciation of the currency and drive up inflationary pressures through higher import costs. To prevent that outcome, many EM central banks have historically had to instead raise interest rates to protect their currency at the risk of depressing short-term growth.

Yet in recent years, more and more monetary policymakers in the developing world have been allowed to act more in line with the Fed and central banks in other mature economies thanks to more muted inflation trends.

Analysts point out as long as economic activity is slow to rebound when lockdowns are eventually removed, central bank bond-buying and any attendant increase in money supply is unlikely to spark price pressures.

“If economic activity is really slow, you can print money and it isn’t going to create an inflationary impulse,” said Jim Caron, head of global macro strategies in fixed income for Morgan Stanley, in an interview.

Still, risks abound for EM central banks, especially among those lacking independence and credibility in the eyes of investors, says analysts.

Monetary policymakers viewed as susceptible to pressure could be pushed into maintaining bond-buying programs at the order of politicians looking to juice growth.

“These present short-term benefits but also long-term drawbacks if not well managed. They will be a real test of central banks’ credibility,” said Anjeza Kadilli, Senior Economist at Pictet Asset Management.

In markets, U.S. equities were on course to book gains for the week, with the S&P 500 SPX, +1.58% and Dow Jones Industrial Average DJIA, +1.78% buoyed by hopes that a coronavirus treatment could come into view. The 10-year Treasury note yield TMUBMUSD10Y, 0.652% rose 3 basis points to 0.64%, trimming the maturity’s week long drop.