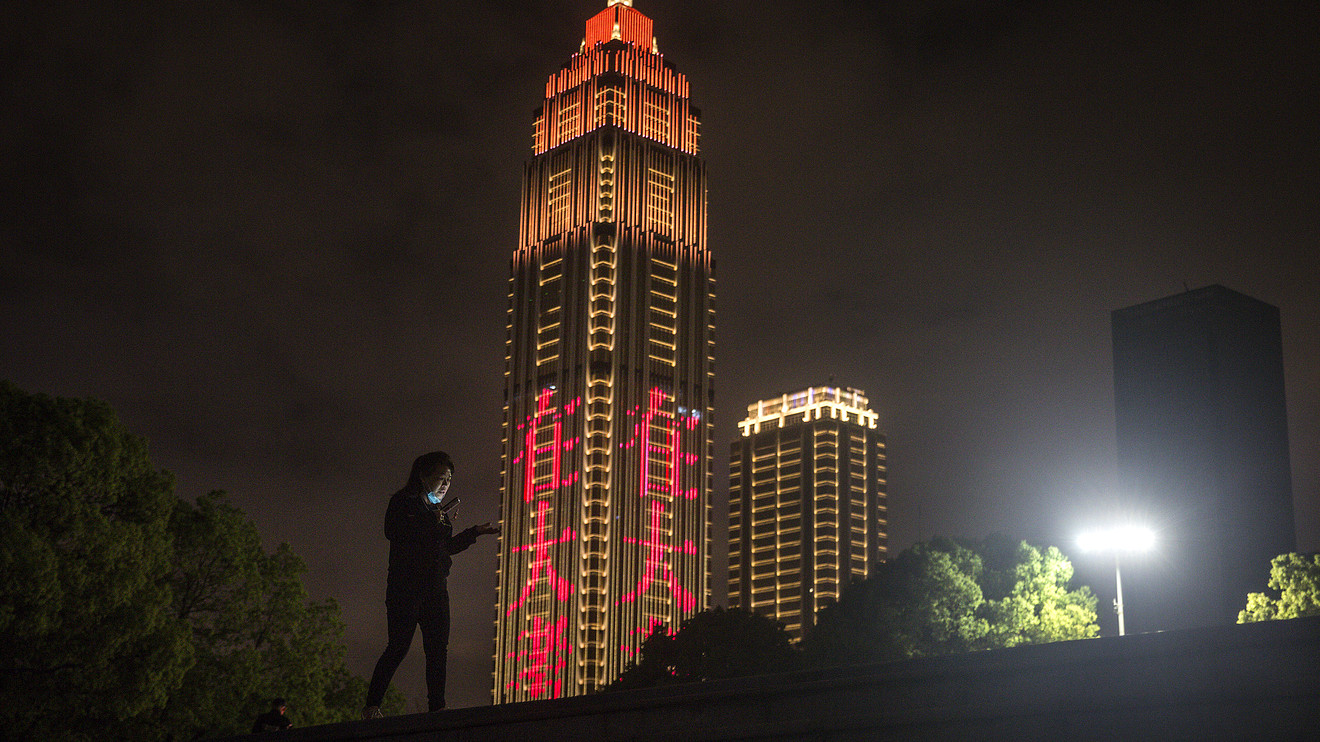 The number of cases of the coronavirus that causes COVID-19 rose above 2.18 million on Friday, as China doubled the official number of deaths in Wuhan, the city that first reported the illness late last year, and its GDP fell by 6.8% to mark the first economic contraction on record.

China has been tracking the growth of its economy since 1992 and had never before had a negative number. The result was still better than the median forecast for an 8.3% contraction in a poll of economists by the Wall Street Journal.

Other Chinese data, while weak, showed sharp improvement in March from January and February, when restrictions on movement and economic activity were introduced. Retail sales for March fell 15.8%, and industrial production fell 1.1%. But retail sales were down 20.5% in the January-February period, and manufacturing surveys have also shown a rebound in March.

Chinese authorities revised the death toll from Wuhan higher by 50% on Friday, to 3,869 from 2,579, as the Guardian reported. The new number comes after experts questioned whether China was understating its tallies and compared them with other smaller countries that have had far higher numbers.

The number of cases of COVID-19 globally climbed to 2.18 million on Friday with 147,384 fatalities, according to data aggregated by Johns Hopkins University. The U.S. has the most cases at 672,246 and 33,318 fatalities, and New York remains the U.S. epicenter.

See:As Germany begins to open up, here’s a look at which European countries have relaxed their coronavirus restrictions

President Donald Trump unveiled guidelines for states to reopen after lockdowns, although the administration stopped short of suggesting a time frame. The guidelines offer a series of six metrics that states should satisfy before allowing people to return to work, including a decline in any flulike illnesses over a 14-day period and a clear downward trajectory of COVID-like cases.

The guidelines represent a noteworthy departure from a position the president took earlier in the week, when he suggested a May 1 date for when many states could lift restrictions. He also claimed to have “absolute authority” in determining when restrictions would be eased, despite it being largely governors who instituted the coronavirus restrictions that are in effect. The president has little constitutional power to force state governments to change laws and regulations regarding public health, constitutional experts say.

There was some positive news late Thursday from the health-care publication Stat News Report, which said University of Chicago researchers had seen “rapid recoveries” in 125 COVID-19 patients taking Gilead Sciences Inc.’s experimental remdesivir as part of a clinical trial.

Stat said it obtained a recorded video discussion about the trial among University of Chicago faculty members in which a physician said that when some people start taking the drug fevers come down, with some coming off ventilators.

However, the university said it was far too early to draw definitive conclusions from the leaked discussion.

“Partial data from an ongoing clinical trial is by definition incomplete and should never be used to draw conclusions about the safety or efficacy of a potential treatment that is under investigation,” a University of Chicago spokesperson said in an email on Friday morning. “In this case, information from an internal forum for research colleagues concerning work in progress was released without authorization. Drawing any conclusions at this point is premature and scientifically unsound.”

The news sent Gilead shares GILD, +7.95% sharply higher and triggered a stock-market rally. There are no proven treatments or vaccines for the novel coronavirus, but remdesivir is considered a front-runner in the race to develop a treatment for that works.

A company developing a possible vaccine candidate, Moderna Inc. MRNA, +17.85%, said Thursday it will receive up to $$483 million from the U.S. government to accelerate its research. Moderna plans to begin a Phase 2 study in the second quarter and start Phase 3 testing as soon as fall. The company plans to hire 150 new staff this year in the U.S. The first patient in the Phase 1 trial received a dose of the vaccine candidate March 16.

Equity analysts continued to change models and ratings on stocks that are expected to be hurt or helped by the virus. Benchmark’s Matthew Harrigan initiated coverage of Netflix Inc. NFLX, -4.11% with a bearish sell rating, and said streaming services are likely to be the first thing canceled by people who have lost their jobs during the pandemic.

Goldman Sachs downgraded Apple Inc. AAPL, -1.93% to sell, cut its stock-price target to $233 from $250 and reduced its earnings estimates for the third time since Feb. 17. Analysts led by Rod Hall said they are modeling a far deeper reduction in unit demand through mid 2020 followed by a shallower recovery heading into 2021. “We also assume some lingering [average selling price] weakness as consumers look to economize similar to what we have seen in prior downturns,” they wrote in a note to clients.

See: Business in the Age of COVID-19: A MarketWatch series

Here’s what companies said about COVID-19 on Friday:

• Altria Group Inc.’s MO, +2.07% chairman and chief executive, Howard Willard, who is recovering from COVID-19, is stepping down after 28 years with the company. His retirement was effective April 14. The cigarette and smokeless-tobacco manufacturer named Vice Chairman and Chief Financial Officer Billy Gifford as CEO. The board of directors has decided to separate the roles of chairman and CEO. Thomas Farrell, formerly the independent presiding director, was elected independent chairman. Sal Mancuso, formerly senior vice president of finance and procurement, was elected as the new CFO.

• Cinema operator AMC Entertainment Holding Inc. AMC, +32.17% has enough liquidity to withstand suspension of operations until a partial reopening ahead of Thanksgiving. The company commenced a private offering of $500 million of first-lien notes due 2025. The company is currently generating effectively no revenue as all of its theaters have suspended operations through the end of June.

• Boeing Co. BA, +13.08% will resume next week all commercial-airplane production at its Puget Sound–area facilities in Washington as part of “a phased approach.” Boeing last month halted operations there and at several other facilities scattered around the U.S. due to shelter-in-place orders. Boeing South Carolina remains in a halt. Some 27,000 Boeing employees in the Puget Sound area, which includes Seattle and its suburbs, will return to production of the 747, 767, 777 and 787 aircraft, the company said. The 737 program will resume working toward restarting production of the 737 Max, which has been grounded worldwide since March 2019 after two deadly crashes were pinned to the plane’s faulty anti-stall system. The company will stagger shifts, require face coverings, and install visual cues and signage so employees can keep their distance from each other, among other precautions. Boeing will provide personal protection equipment wherever physical distance cannot be maintained, it said. Wellness checks at the beginning of every shift and voluntary temperature screenings are also part of the plan, the company said.

• Cantor Fitzgerald is cutting hundreds of jobs in an effort to reduce costs, Bloomberg News reported. Hundreds of layoffs will span various divisions at the investment bank, Bloomberg said, citing people familiar with the matter, resulting in less than 5% of its overall workforce of about 12,000. Some layoffs have reportedly already occurred, while more are planned in the coming weeks.

• Facebook Inc. FB, +1.33% is canceling all in-person events with more than 50 people through June 2021. CEO Mark Zuckerberg laid out the company’s plans to reopen amid the coronavirus pandemic. The “vast majority” of Facebook workers will be required to work from home through at least the end of May, while those with critical jobs that can’t be done remotely will be able to return to the office. “Overall, we don’t expect to have everyone back in our offices for some time,” Zuckerberg said. Employees can voluntarily plan to work from home through the summer. Facebook will also cancel all business travel through June. Zuckerberg said some events could be held virtually. That may include next year’s F8 developers conference; this year’s F8 was canceled in February due to COVID-19 worries. Facebook had about 45,000 employees as of December.

See:Facebook will start warning users who ‘like’ coronavirus hoaxes

• Kohl’s Corp. KSS, +6.61% has entered a $1.5 billion asset-based revolving credit facility, as the department-store chain moves to refinance about $1 billion in debt and attain additional financial flexibility. The company has suspended its quarterly cash dividend starting in the second quarter, but remain committed to resuming the payout it as soon as the environment has stabilized from the coronavirus pandemic.

• Stein Mart Inc. SMRT, -27.15% and Kingswood Capital Management have mutually agreed to end their deal to take Stein Mark private due to the uncertainty caused by the virus. The deal was announced on Jan. 31, and an affiliate of Kingswood was to acquire all Stein Mart shares not owned by Jay Stein, Stein Mart’s former chief executive and current chairman, and related investors. The Stein Mart board, Jay Stein exempted, acted on the recommendation of a special committee tasked with overseeing the merger, the company said.

• TravelCenters of America Inc. TA, -0.47% is furloughing 2,900 field employees and 122 corporate employees after it was forced to close many of its full-service restaurants because of the pandemic. The Westlake, Ohio–based company’s TA, Petro Stopping Centers and TA Express travel centers remain open, providing fuel, showers, restrooms, quick-serve restaurants and convenience stores for drivers, but stay-at-home orders in many states have closed or limited its restaurant service and greatly reduced customer demand. All furloughed employees will receive benefits and be eligible for health care based on their plan, and will be eligible to apply for enhanced jobless benefits under the CARES Act. “This decision was very difficult, but these are unprecedented times,” Chief Executive Jon Pertchik said in a statement.

• Uber Technologies Inc. UBER, +2.84% is withdrawing its 2020 guidance and has warned that net losses would widen by $1.9 billion to $2.2 billion due to investment impairments. The company has implemented an assistance program for its drivers and delivery people, which will reduce revenue by $17 million to $22 million in the first quarter, and roughly $60 million to $80 million in the second quarter. Uber is slated to report first-quarter earnings after the closing bell May 7.