“Even though people can’t come to the church I wanted to bring Jesus to them,” said  Father Enrique Salvo, pastor of the Church of St. Anselm & St. Roch in the Bronx.

Which is why in the run-up to Easter on Holy Thursday, the 47-year-old Roman Catholic priest from Nicaragua hopped into his car along with a driver, each wearing a mask. As they wound through the streets, Father Salvo popped out of the sunroof, slipped off his face gear and with arms outstretched, held the vessel containing the Eucharist for all to see.

Sidewalks were pretty empty, but there were pedestrians.

“Some people made the sign of the cross as we went by,” the priest said. “Others waved. People yelled ‘God bless you’ from their windows.”

For members of a church in which “at least eight family members of active parishioners have been lost,” he adds, “I wanted to reach out.”

Turning your Volkswagen Tiguan into a makeshift Popemobile is one imaginative way devoted religious leaders across New York City—and faiths—are answering an urgent and ubiquitous question: How can you stay connected with congregants who are stuck at home during the COVID-19 lockdown?

Live-streamed and taped services, interactive Zoom ZM, -0.13% and other video and audio conferencing platforms, Skype, FaceTime, email, texts and old-school phone-a-thons are playing key roles in bridging the distance and to nourish spirits. Pastors, rabbis, imams and nuns agree that amid coronavirus solitude, contact, even if it’s indirect, matters more than ever.

Ask Rabbi Serge A. Lippe, 55, who’s spent 23 years at Brooklyn Heights Synagogue, a reform house of worship that embraces technology. The staff has worked overtime to digitally connect with its more than 500 families in the face of the coronavirus. 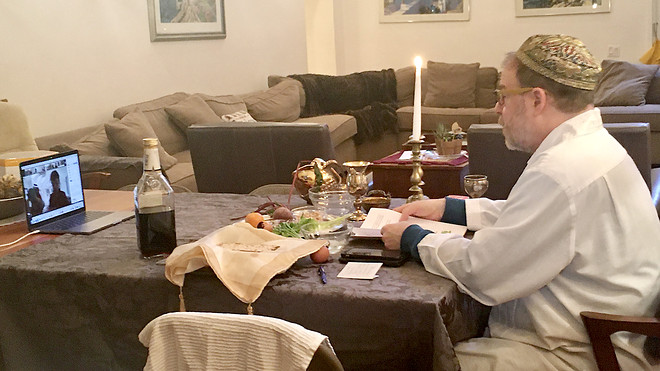 Social distancing is “a poor term given that there is nothing social about distancing ourselves from one another,” Rabbi Lippe says in a video address dated March 19. “We who constitute the synagogue community are dedicated to making sure no one passes through this period in such isolation.”

He means it. He helped lead a virtual Seder on the second night of Passover. Because a fair number of members are medical professionals on the front lines, a special prayer is said for them on Friday nights. And he delivers services he records by himself, except for an accompanist stationed 20 feet away. That’s a small sample of outreach here.

Don’t miss: What daily life during the pandemic looks like to people across the U.S., and beyond

“We have been blessed because we invested in and made use of technology long before this pandemic started,” said Rabbi Lippe. “I work very hard to imagine congregants in front of me when I tape a service. It helps to feel the connection.”

The impact of eye-to-eye contact can’t be overstated. Zoom offers that, as well as FaceTime and Skype. The rabbi uses all of those tools to communicate “and read faces” of his members as they ask challenging new questions. Case in point: Could you lead a funeral remotely?

“I haven’t conducted a Zoom funeral yet, but I have been on the phone with several congregants with severely-ill, aged parents and have been discussing such details,” Rabbi Lippe said.

Sister Marie Promise Atelon, 52, a member of the Society of St. Margaret, an Episcopal order whose New York City base is at Neale House on Rector Place, has fielded her own hard questions.

An ordained deacon whose pastoral caregiving stretches from Trinity Church downtown to Saint Thomas Church on W. 53rd St. in midtown, where she is studying to be a priest, the dedicated Sister from Haiti said she is connecting with people “by phone and praying with them.” 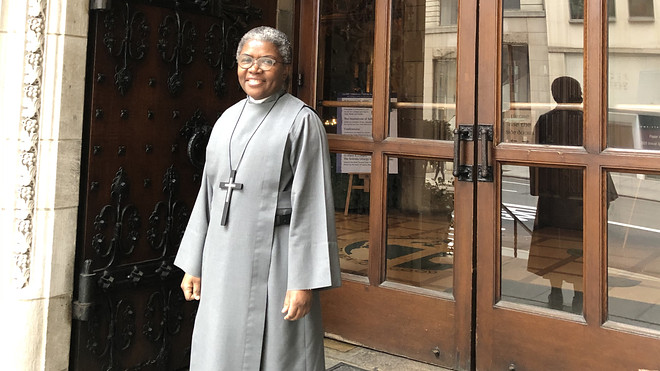 “When someone has this disease, the concern is fear,” she said. “People know they can call for a prayer when they are going through a hard time. That’s the little I can do. Small acts matter more now than ever. But it is frustrating when you see so many things happening and you can’t be there to offer your service.”

In the Allerton neighborhood of the Bronx, Sister Patricia Wolf, 75, president of St. Catharine Academy—an all-girls Catholic school from which she graduated in 1962, a year before entering the Sisters of Mercy—said the institution was very well-prepared to stay connected with students and parents and faculty during the pandemic.

“We made the transition to digital learning pretty seamlessly,” she said. Fluency in BlueJeans Network (a Zoom rival just bought by Verizon VZ, +1.40% for a price tag reported at under $500 million) and Google Classroom and other technological tools is working, but Sister Patricia acknowledges that it “can’t replicate the human dimension.”

A harsh reminder of that came when a student’s father died from COVID-19. “We connected with the family, of course. But the rituals that surround events like that—the wake and the funeral and hands-on support—are things that are not now available,” she said. “That’s a hard lesson.”

At the Islamic Cultural Center in East Harlem, Sheikh Saad Jalloh, 50, calls coronavirus “a powerful wake-up call. It touches everyone.” It has, unsurprisingly, narrowed the focus of a longstanding weekly group chat via WhatsApp in which he stays in contact with members. “Of course most of the questions,” he said, “concern COVID-19.”

As the imam, his job is assisting people, he explained. Due to the quarantine, he can no longer visit people who are sick or need guidance. But his phone is ringing off the hook, including calls from hospital staff inquiring about “what to do with a sick Muslim. Life is bumpy, up and down,” he said, adding that he misses group prayer in the mosque. “Many of the members are taxi drivers. I worry about them and their jobs.”

Like her colleagues, she’s gotten “a crash course” in videography so that she can independently tape services that get posted to YouTube. “We’re seeing at least two maybe three times as many views on YouTube than we were tracking in person in the church service,” she said.

She understands the effectiveness of an old-fashioned phone call. Before Easter, five dozen volunteers reached out to members to check in and to ask if parishioners had requests for specific prayers.

“It’s like getting a handwritten letter instead of an email,” Powell said. “It feels so personal. A lot of our members live alone. There’s truly a deep sense of gratitude about keeping in touch this way.”

Pastor Powell is set to officiate a wedding set for May 9 for a couple in their 30s. It will be her first COVID-19 nuptials, one with social distancing, and it’s shaping up to be as intimate as can be — a bride, groom, her and a witness.

See: Weddings canceled and delayed—What to consider if you’re planning one

“They’ll do the wedding again in a big way,” she says. “They can’t have a huge party now, but they can still do what matters most — stand before each other and make vows. It’s a ritual we’ve seen a million times. But now everything is different. Everything feels more terrifying and more precious. I’m proud of them.”

Powell’s reaction reminds that the power of connection between congregants and religious leaders flows in both directions — and it’s coursing back and forth all over the city.

At the Church of St. Anselm & St. Roch in the Bronx, Father Salvo tapes daily masses — in Spanish, sometimes in English — and has heard a few parishioners’ confessions in a parking area. “That’s something new,” he said.

What isn’t new is the resilience and faith of parishioners, including an elderly woman who lost her daughter to COVID-19.

“Her family was one of the first cases of a death,” he said. “It happened a few weeks ago, and she was naturally unconsolable. I called on Good Friday to check on her and she was a lot better. She said, ‘The churches are closed right now but our hearts are open to God.’ She said it in passing.”

He’s been thinking about it ever since.