Donald Trump‘s pseudo-monarchical politics have thrown America into a Shakespearean tragedy. It’s a story of an amoral Machiavellian, hungry for power, manipulating the people’s anger, fear, and hatred of the government; of self-serving and hypocritical career politicians around him preserving their power by perpetuating social and economic inequality; of the stunning moral compromises a resentful populace is willing to make for the comic relief provided by a charismatic clown; and of the social catastrophe that can unfold when power is centralized in one man who becomes unstable.

William Shakespeare foretold it all, in a mix of tragedies, comedies and historical tales. These 10 scenes from Shakespeare resound most alarmingly in the age of Trump. And with theaters closed due to the coronavirus, many are available online through the generosity of both leading cultural institutions and the Shakespearean acting community.

Like Trump, Macbeth’s ambition is bound up with his sense of manhood, which is challenged in this scene by Lady Macbeth. Both the Scottish king and the American president respond with the politics of machismo.

The Folger Shakespeare Library in Washington., D.C. has made its 2008 co-production with Red Bank, NJ-based Two River Theater directed by Aaron Posner and magician Teller (of Penn & Teller)—free to watch online free through July 1.

Othello: Act I, scene i

The villain Iago portends the current Republican base: people ask, “Which came first, the economic anxiety or the racial resentment,” while underneath both is a male fragility clinging to traditional power structures.

Stick around for William Marshall’s great Othello in this 1981 version made available from the nonprofit group Department of Afro American Research, Arts, and Culture.

Trump-like, Jack Cade is a stupid demagogue propped up in a shadow campaign by Machiavellian aristocrats aiming to secure their own interests, but, in his self-conceit, he thinks sovereignty is his birthright.

Shakespeare’s satire of 15th-century populism got a socially distanced Zoom performance earlier this month from The Show Must Go Online.

Richard’s allies know he was born with a withered arm. No one believes this mounting tyrant’s claim to have been deformed by witchcraft. But, like Trumpworld, they signal political support by sanctioning his obvious lies.

Shakespeare’s vision of post-truth politics was updated in Richard Loncraine’s 1995 film, starring Ian McKellen, which sets the story in modern Europe to suggest an analogy between 1480s tyranny and 1930s fascism.

Young, male, working-class nativists claiming immigrants are stealing their jobs and their culture meet Shakespeare’s Thomas More, who calls out their “mountainish inhumanity.” Shakespeare has words for the xenophobia in the party of Trump.

Set in 1517, this collaboratively written play was censored for its politics. Ian McKellen played More in 1964 in one of its first-ever stagings. In 2012, he connected Shakespeare’s scene to the European refugee crisis at an event for The People Speak UK.

Foreshadowing Trump, Angelo is a sexual predator, but has political power as a judge appointed to rule Vienna in the duke’s absence. His victim, a nun in training named Isabella, has none in Shakespeare’s most famous #MeToo moment.

“Who will believe thee, Isabel?” Angelo asks as he demands sex to save her brother from a death sentence as punishment for getting his girlfriend pregnant. This chilling version comes from the Royal Shakespeare Company’s 2019 production.

King Lear: Act I, scene i

The first scene of King Lear is Shakespeare’s version of Trump’s first cabinet meeting—Let’s begin with all of you talking about how much you love me.

In this 2014 production from London’s National Theatre and starring Simon Russell Beale, Lear asks that question of his three daughters before he divides his kingdom among them.

Like the resistance in our time, women lead the opposition against the tyrannical Richard III. They see and speak the tyrant’s evil, though a structural sexism gives them a diminished role in government.

In Richard III and in America, women repeatedly prove to have precisely the skills lacking in the men whose machismo ran the nation into a rut—a theme highlighted in the 2018 production from Free Shakespeare on the Common in Boston.

In Shakespeare’s plays, opposition to tyranny on moral grounds goes nowhere. The resistance gains traction only when the tyrant takes the wealth of the upper class and fails as a steward of the people’s resources.

Come election time, the economic impact of Trump’s botched response to the coronavirus may carry more weight than his many personal villainies. The key scene starts at 39:40 in this 2014 production of Richard II from Royal Shakespeare Company, staring David Tennent.

Much Ado About Nothing: Act I, scene i

At the start of Shakespeare’s best comedy, the soldiers returning from war—to a space where love and joy are possible again—gives us hope for life after the tragedy of Trump is over.

With signs saying “Restore Democracy Now,” “Hate is Not a Family Value,” and “I Am a Person,” they are returning from the culture wars in The Public Theater’s 2019 production featuring an all-Black cast under a Stacey Abrams 2020 banner, available from PBS. 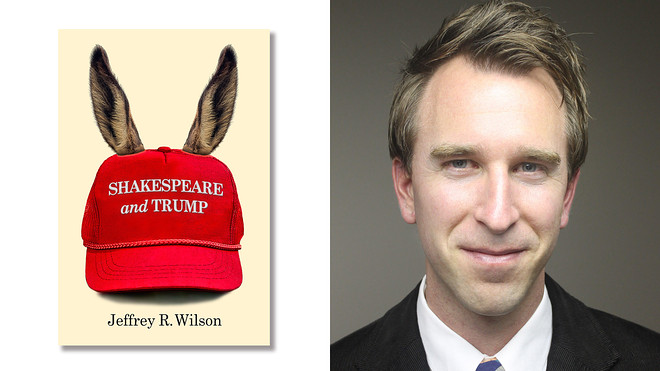 Jeffrey R. Wilson is a faculty member in the Writing Program at Harvard University, where he teaches the Why Shakespeare? section of the university’s first-year writing course, and the author of “Shakespeare and Trump.” Follow him on Twitter @DrJeffreyWilson.