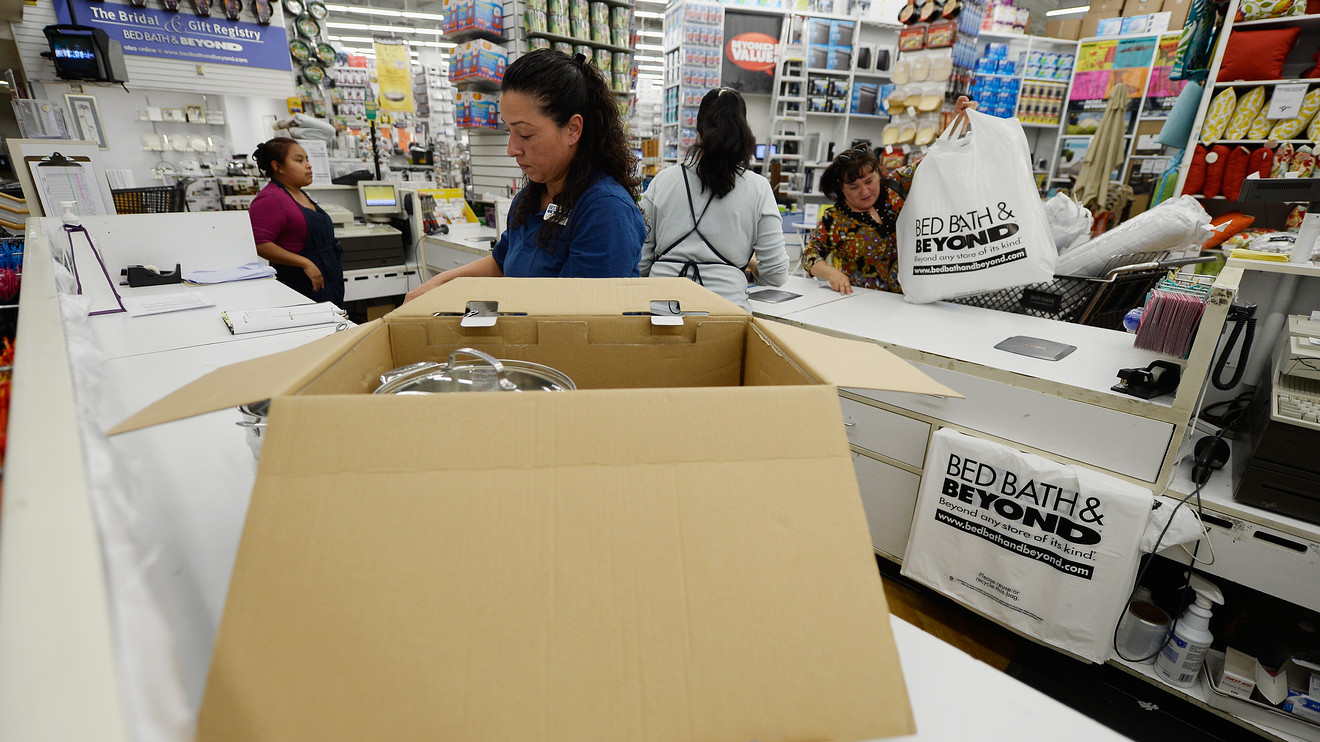 Bed Bath & Beyond Inc. says it has seen a spike in a number of categories due to the COVID-19 outbreak, including a 400% year-over-year jump in sales of bread makers during the past month and a 100% increase in the number of vacuums purchased in the past week.

Tritton said the home-goods retailer has also sold the equivalent of 10 million cups of coffee.

Bed Bath & Beyond’s comments echo the feedback from fellow retailers including Target Corp. TGT, +2.90%, which has said there’s been a shift in shopping behavior after the early grocery stockpiling.

See:5 weird products Americans are stockpiling including a surge in demand for dumbbells

Bed Bath & Beyond has rolled out curbside pickup and buy-online-for-pickup-in-store capabilities as its locations were shuttered. At its Buy Buy Baby stores, 11,000 orders were filled using curbside delivery during the first week after its April 1 introduction. The service is being launched at Harmon stores this week, and in-store pickup of online purchases will be launched at Buy Buy Baby this week.

Both services will come to Bed Bath & Beyond namesake stores when they are allowed to reopen.

All but 170 Buy Buy Baby and Harmon stores are closed until at least May 2. By the end of this week, a quarter of Bed Bath & Beyond and Buy Buy Baby stores will be converted to fulfillment centers, which will double the fulfillment network and fulfill about 44% of daily orders, Tritton said. Nearly 40% of orders are now being filled within 50 miles of their destinations.

“This has been an incredible learning curve for us, and we continue to optimize our regional fulfillment capabilities to deliver faster and at lower cost,” he said on the call, according to a FactSet transcript.

Bed Bath & Beyond’s stock soared 17% in Thursday trading after the earnings announcement, and news that the company has sold its One Kings Lane home-décor business.

“[T]he current environment might actually create an opportunity for Bed Bath & Beyond to accelerate its store rationalization efforts and gain better lease economics (250 leases up for renewal this year),” wrote Raymond James in a note.

Analysts at Raymond James said they don’t forecast a liquidity issue in the near future and maintained their strong buy rating on the stock even as they cut their share-price target to $9 from $14.

Raymond James estimates April sales so far are down 60% to 65%, which isn’t as steep and had been thought.

“Bed Bath & Beyond brand e-commerce sales grew more than 90% year-over-year in April to date, which illustrates that the brand still has value as consumers are shifting spending online in today’s highly competitive environment,” the analysts said.

Still, fourth-quarter problems had emerged before the coronavirus.

Also:Costco sales jumped by more than $1.5 billion as coronavirus spread in March

“Product availability with certain key promotional categories such as kitchen electrics leading into the holiday period was either too low or just out of stock,” Tritton said. “We just didn’t have enough of the right stuff, which hurt us.”

The retailer also had more clearance activity, part of a turnaround effort that includes a more focused merchandise lineup.

Bed Bath & Beyond reported fourth-quarter adjusted earnings per share of 38 cents, compared with a FactSet consensus forecast of a loss of 5 cents per share. Sales of $3.11 billion were down from $3.31 billion last year but ahead of the $3.1 billion FactSet consensus. Same-store sales fell 5.6%.

Bed Bath & Beyond has put a number of measures in place in response to COVID-19, including furloughing 62,000 workers, drawing down the $236 million remaining in its revolving credit facility, and postponing $150 million in capital expenditures.

Don’t miss:Retailers lost 42,600 jobs in March but could lose millions by May

The company ended fiscal 2019 with $1.4 billion in cash and investments.

“But with management now juggling actions to reduce costs, shore up liquidity and quickly shift sales to e-commerce, we view the path ahead [as] increasingly onerous for Bed Bath & Beyond’s newly minted leadership team.”