Home
Stocks
Business in the Age of COVID-19: Microsoft’s push to the cloud may save it from a coronavirus crash
Prev Article Next Article 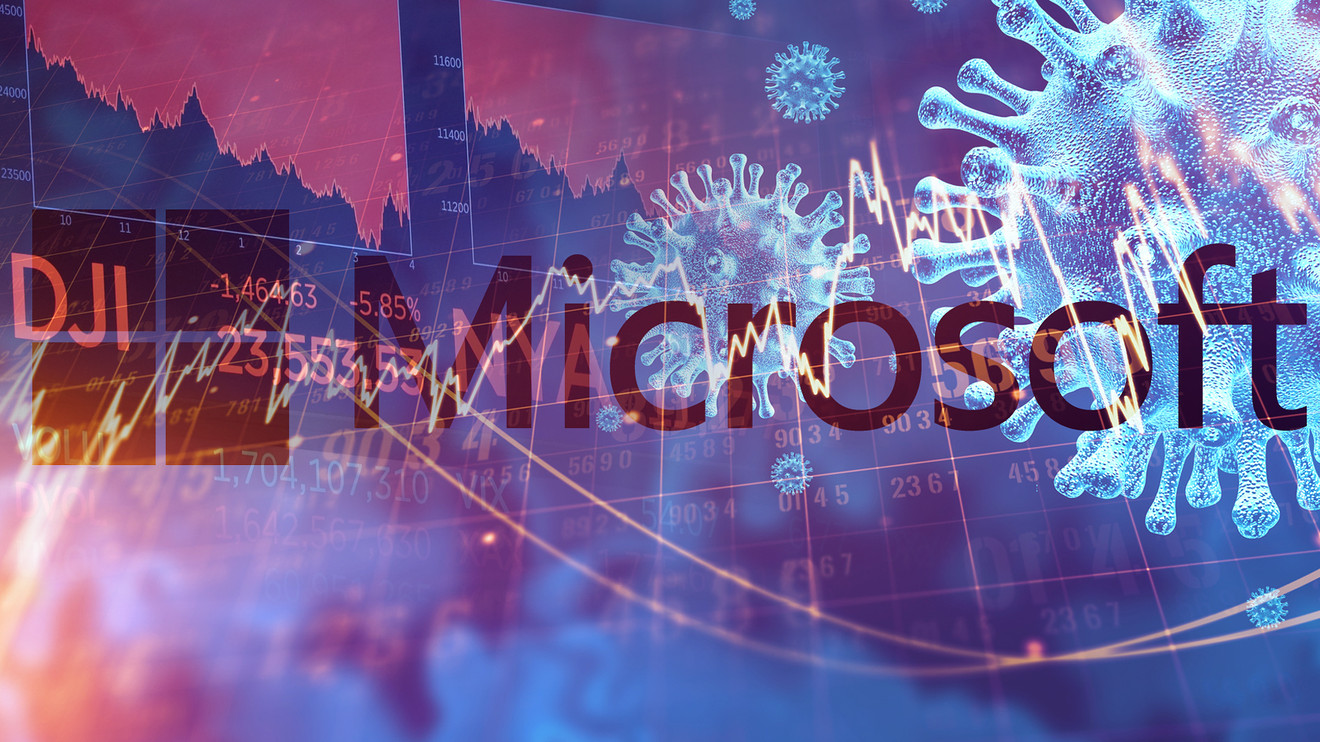 This article is part of a series tracking the effects of the COVID-19 pandemic on major businesses, and will be updated. It was originally published on April 16.

As the last recession washed over Microsoft Corp. in 2009, the company’s sales and earnings declined in the same year for the only time in the tech giant’s storied history.

A lot has changed since then at Microsoft. MSFT, +3.00% . As the COVID-19 pandemic brings fears of another economic downturn, the company could face difficulties in the same businesses that caused that decline, but could be spared a similar overall fate by the different focus that arrived with a new chief executive.

When Satya Nadella arrived in 2014, he refocused Microsoft on the cloud, putting money and other resources into the Azure cloud-computing business and transitioning Microsoft’s software offerings to cloud subscription offerings. Those businesses are less likely to be slammed by economic difficulties for Microsoft’s customers than the legacy Windows and on-premises IT businesses that Microsoft still has.

Business in the age of COVID-19: Read profiles of how other large companies will be affected by the coronavirus

For an example of this dynamic, consider Microsoft’s software business. In past recessions, customers would likely choose not to upgrade to a new version of Office in order to put off that expense, depriving Microsoft of that revenue. However, with cloud subscriptions, customers are more likely to maintain their subscription to avoid changes to workflow as employees are stuck at home and already facing new difficulties.

Microsoft has also repeatedly crowed about the performance of one of its newest software offerings, Teams, collaboration software that was launched in 2017 and seeks to combine the instant-messaging features of Slack Technologies Inc. WORK, +4.81% and teleconferencing abilities of Zoom Video Communications Inc. ZM, -0.85% .

For more: In just one week, Microsoft adds as many users to its Teams collaboration software as rival Slack has in total

While the cloud businesses should help Microsoft stave off the type of decline it suffered in 2009, it still has the businesses that suffered then, and their performance could obscure gains from next-generation counterparts. The Azure cloud-computing business is lumped with sales of servers and other IT-focused products in Microsoft’s earnings report, for example, so it may be tough to discern gains for one and losses for another. Microsoft typically discloses percentage gain in Azure sales, but could seek to provide more info or break out full results from Azure, as rival Amazon.com Inc. AMZN, +4.35% does for its Amazon Web Services cloud-computing division.

Microsoft’s stock performance in the first quarter reflects the dynamic at play: It was the only one of 30 Dow Jones Industrial Average DJIA, +0.14% components to gain in the first three months of the year as COVID-19 wracked the stock market, but added only a single penny to its share price.

What the numbers are saying

Revenue: Expectations for Microsoft have declined by less than 1.5% overall, with analysts currently estimating that the company will report fiscal third-quarter sales of $34.05 billion, down from $34.55 billion expected at the end of January. Microsoft is scheduled to report third-quarter earnings on April 29. For the fiscal year, which will end at the end of June, analysts are currently estimating revenue of $141 billion, down from $141.88 billion as of the end of January.

Microsoft reports sales in three large buckets: “Productivity & Business Solutions,” which comprises most of the cloud software assets, including LinkedIn; “Intelligent Cloud,” which includes Azure, server sales and some other IT-focused offerings; and “More Personal Computing,” which includes the Windows and Xbox businesses along with Surface hardware and some other properties. Expectations for all three have declined, but the biggest hit is expected to come in the PC division, where third-quarter projections have declined to $10.6 billion from $10.95 billion at the end of January. Cloud expectations have dipped to $11.88 billion from $12 billion and software projections have dropped to $11.55 billion from $11.67 billion, according to FactSet.

Earnings: Analysts on average expect Microsoft to report fiscal third-quarter net income of $9.99 billion, or $1.30 a share, according to FactSet, down from $1.33 a share on Jan. 31. For the full year, analysts expect earnings of $5.61 a share, down from $5.69 a share at the end of January.

Stock movement: Microsoft added a penny to its share price in the first quarter, the best performance of any Dow component and one of only 30 S&P 500 components to increase in that period.

What the company is saying

Microsoft has been collecting its COVID-19 communications and information on a single page. Here are some highlights.

April 9: Microsoft detailed the growth of Teams and other remote-work trends in a blog post, revealing that meetings on the software totaled a record of 2.7 billion minutes on March 31, a 200% increase from just two weeks earlier.

March 28: Microsoft posted on a blog that traffic for Azure had increased 775% amid the COVID-19 pandemic. Two days later, it corrected the post to note that figure was solely related to traffic for Teams meetings in one specific country, hard-hit Italy. Microsoft filed an 8-K with the Securities and Exchange Commission to acknowledge the error.

March 21: CEO Nadella posted an email to employees publicly on Microsoft’s business-networking property, LinkedIn, that detailed what the company was doing to address COVID-19 for customers and employees. In the following days, Nadella gave interviews to CNBC and Axios on the same topic. Azure also detailed its efforts in a blog post on the same day.

Feb. 26: Microsoft disclosed it would not reach its guidance for the More Personal Computing segment because of supply-chain issues, but maintained guidance for its other segments.

What the analysts are saying

• “While the company will navigate through this downturn better than most, it is not immune to a broader contraction in IT spending. The clear positives for Microsoft are the uptick in demand for Teams, cloud consumption (Azure), and Xbox Live. However, on the other side of the coin, PC demand, new enterprise bookings and higher potential churn for O365 subs could create some near-term headwinds.” — Evercore analysts on April 15, maintaining an outperform rating and $190 price target.

• “Microsoft’s diverse businesses do, unsurprisingly, suggest a range of positive and negative impacts from COVID and a recession. However, we expect the company’s momentum as it aggregates increasing portions of enterprise application, database, data center and cloud spend to continue through this period, prompting as enterprises consolidate vendor choices even more in this environment, prompting us to a below sector mean cut to estimates. … We see more economic sensitivity in the Windows PC OEM and Server businesses and its more transactional businesses, and less so in Office/Azure and its EA businesses. … We see Microsoft benefiting as a COVID play around collaboration (Teams), gaming, virtual desktop, and some areas of cloud, offset by likely slower server, services, and Windows OEM.” — Raymond James analysts on April 3, maintaining a strong buy rating and decreased price target to $183 from $200.

• “We’ve heard from more large enterprise customers that have told us that the pace at which they’ve been able to pivot to WFH technologies and scale down less-critical IT projects has been constrained by their on-premise infrastructures and that at a result, they plan to accelerate their move to Azure (and AWS/Google) once the crisis passes. In fact one such customer told us today that they had a precrisis plan to be 40% in the cloud within 10 years and now have an accelerated goal (admittedly aspirational) to be 80% in the cloud in 5 years. This is a key part of the medium-term bull case on Microsoft and AWS and we agree.” — Deutsch Bank analyst Karl Keirstead on April 1, with a buy rating with $180 price target.

• “The main message is that spending on AWS and Azure may prove to be a particularly resilient vector, much more so than other software categories, as the shocks from COVID-19 create a forcing function which catalyzes faster public cloud adoption as companies understand the need to scale up remote work capabilities.” — JP Morgan analysts on April 3, with an overweight rating with $185 price target.

• “Microsoft has added new incentives (effective 1st April through 30th September) for partners who work with customers to achieve 15% usage in Teams deployments.” — Credit Suisse analyst Brad Zelnick on April 3, who has an outperform rating with a $190 target.

• “While our 1Q20 AlphaWise CIO Survey indicates slower IT budget growth and potential for negative revisions, software is still an IT budget share gainer and Microsoft is exposed to many near-term remote work priorities. Microsoft remains a top vendor for the key secular trends in tech postcrisis. While Microsoft is not immune to impact from COVID and likely will see macro drag on the transactional businesses in addition to some demand destruction on new business in non ‘Work from Home’ businesses, our 1Q20 CIO survey highlights Microsoft’s strong positioning for both the near-term and longer-term environments.” — Morgan Stanley analysts on April 2, with an overweight rating with a $180 price target.