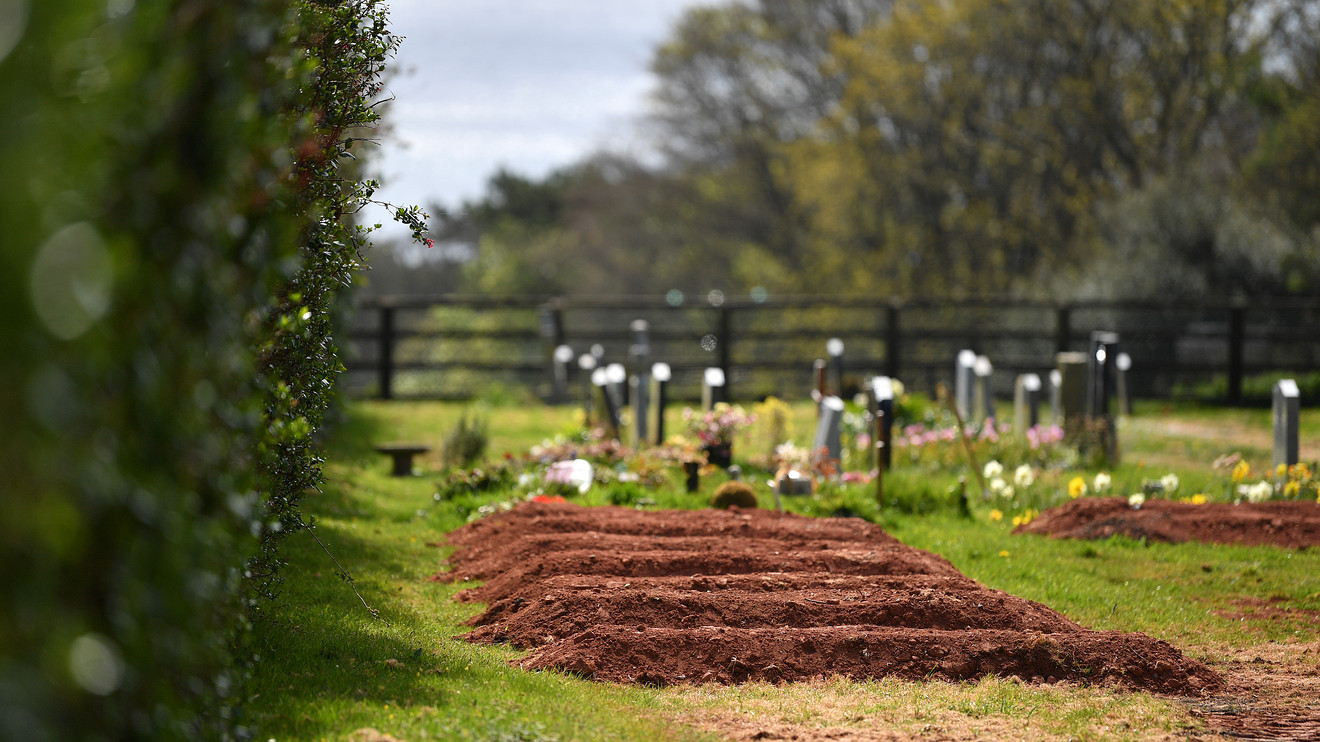 An apparent slowdown in deaths and hospitalizations from the coronavirus that causes COVID-19 in the U.S. epicenter of New York weighed against a grim forecast for the global economy and a widening row between President Donald Trump and state governors over how to get Americans back to work.

New York Gov. Andrew Cuomo said Monday that “the worst is over” for his state, with hospitalizations, intubations and admissions to intensive care units all slowing over the last several days. Cuomo said the slowdown showed that social-distance and other public-safety measures are working and urged New Yorkers to stay the course.

The International Monetary Fund on Tuesday forecast that the global economy would recover partially next year from the “Great Lockdown” of 2020, but the economists at the international financial institution didn’t sound entirely convinced.

“Much worse growth outcomes are possible and maybe even likely,” said Gita Gopinath, the IMF’s top economist, with the Tuesday release.

See: IMF isn’t convinced the global economy can shake the ‘Great Lockdown’ by 2021

But it was Trump’s behavior at a press briefing on Monday that drew the most headlines after he insisted his “authority is total” when it comes to deciding how and when to reopen the economy once the virus spread is perceived to have peaked.

His comments came after Democratic leaders in the Northeast and West Coast announced separate state agreements to coordinate their efforts to scale back stay-at-home orders or reopen businesses on their own timetable.

“When somebody is president of the United States, the authority is total,” Trump said at Monday’s White House coronavirus briefing. “The governors know that.”

The assertion comes after weeks in which Trump and his aides have criticized states for failing to secure their own stockpiles of medical equipment and supplies, with his son-in-law, Jared Kushner, even suggesting that the federal stockpile is not meant for states.

Trump also surprised reporters by showing a three-minute video—funded by taxpayers—claiming he had done everything right since the outbreak of the pandemic. The president also brought Dr. Anthony Fauci, the nation’s leading infectious disease expert, to the lectern to allow him to clarify comments made Sunday in a CNN interview in which he acknowledged that “logically” more lives would have been saved if lockdown measures had been made in February and not mid-March.

See also:Trump surpasses even Hoover at mismanagement and the coronavirus fallout proves it

Faui said hypothetical questions sometimes can get you into some “difficulty” and that he did not intend to imply “maybe somehow something was at fault here.”

Cuomo hit back at Trump’s comments, saying the U.S. “does not have a king.”

Read: States are facing a fiscal crisis that will be as brutal as that of the Great Recession

“The only way this really horrendous situation could get worse is if you now see a war between the federal government and the states.” He added, “It’s not legal. It’s a total abrogation of the Constitution. [The] 10th Amendment specifically says power to the states.” The governor also told CNN on Monday evening that Trump’s words were “hostile” and “aggressive.”

See:America should be ready for 18 months of shutdowns in ‘long, hard road’ ahead, warns the Fed’s Neel Kashkari

In Europe, French President Emmanuel Macron said France will remain in lockdown for another month and would only start to return to normal life if citizens obey the rules and the number of cases of the virus continues to drop.

In India, Prime Minister Narendra Modi extended a nationwide lockdown to about another three weeks.

There are now 1.94 million cases of COVID-19 worldwide and at least 121,726 people have died from it, according to data aggregated by Johns Hopkins University. At least 465,073 people have recovered.

The U.S. first-quarter earnings season kicked off on Tuesday with reports from Johnson & Johnson, J.P. Morgan Chase & Co. and Wells Fargo & Co. The two banks were forced to build reserves to protect against souring loans, as expected. J & J had a strong quarter, however, as higher sales of over-the-counter medications offset a decline in sales of medical devices. The company raised its quarterly dividend by 6.3% to $1.01 a share.

Other companies continued to respond to the virus by cutting jobs, issuing profit and sales warnings, suspending share buyback programs and lowering pay.

See:Nordstrom can withstand 12 months of store closures, but other department stores have much less time, analysts say

Here’s what companies said about COVID-19 on Tuesday:

• Core-Mark Holding Co. Inc. CORE, -6.47% is taking a series of measures to combat the effects of COVID-19, after the marketer of fresh, food and other products to the convenience retail industry saw sales slide in recent weeks. After enjoying a sales bump in the first few weeks of March, Westlake, Texas-based Core-Mark said sales fell 12% in the week ended April 10, as cigarette sales fell 7% and non-cigarette sales fell 20%. The company expects that trend to continue until stay-at-home orders are lifted and is cutting staff, reducing hours and suspending contributions to its 401-k program. The company is also suspending share buybacks, although it has no plans to modify its dividend. It is withdrawing its 2020 guidance and deferring non-critical spending to preserve liquidity, reducing inventory levels to align with sales volumes and managing accounts receivable. The company said it believes it has sufficient liquidity to get through the crisis and that it still has $400 million in availability under a revolving credit facility.

• Coty Inc.’s COTY, +5.14% board has agreed to cut its cash remuneration for fiscal 2021 by 25%, a cost-saving measure amid the coronavirus pandemic. The company previously approved a 25% pay cut for corporate executives, including Chief Executive Pierre Laubies

• Dick’s Sporting Goods Inc. DKS, +1.00% is offering $500 million in convertible senior notes that mature in 2025 as it moves to bolster liquidity. Proceeds of the deal will be used for general corporate purposes and the retailer will enter hedging positions to avoid diluting its stock on conversion. Dick’s has already furloughed a “significant number” of employees who work at its retail stores, distribution centers and corporate headquarters to combat the impact of COVID-19. Dick’s said it will continue to provide benefits to furloughed employees. Other actions previously taken include suspending share repurchases, cutting capital expenditures and reducing salaries of executives, senior leadership and certain other employees.

• iHeartMedia Inc. IHRT, +4.85% the biggest operator of radio stations in the U.S., has $647 million in cash as of March 31, including a $350 million draw down from its $450 million revolving credit facility. The company has experienced a decline in national, local and network revenue for the year to date, but says that podcasting and digital revenue has grown. Podcast listening reached an all-time high in March, measured by unique visitors and number of downloads, according to a statement from Bob Pittman, iHeartMedia chief executive. Political advertising, which is weighted toward the second half of the year, is expected to be consistent with prior election years.

• 3M Co. MMM, +2.13% is partnering with engine maker Cummins Inc. CMI, +0.56% to boost production of high efficiency particulate filters used in its powered air purifying respirators (PAPRs). The maker of N95 face masks, and other protective, construction and consumer products, said the partnership could more than double the current production of filters for PAPRs, which is needed as production of PAPRs have been ramped up to meet the surge in demand for personal protective equipment (PPE) as a result of the COVID-19 pandemic. Cummins’ facility in Neillsville, Wisconsin will use equipment normally used to make diesel engine filters to make the PAPR filters, as guided by a 3M design, with production expected to begin by the end of April.

• Navistar International Corp. NAV, +2.06% said a halt to its truck assembly plant in Ohio has been extended through early May due to a supply snag. The commercial truck and bus manufacturer also announced temporary cost reduction measures, including postponing some of its planned spending, deferring pension contributions and a portion of salaries of certain employees, and reducing the workweek of its contractors. The company had already announced other deferrals and delays, including a delay in 401(k) company-match contributions until 2021. The measures are expected to save about $300 million in cash through the end of the company’s fiscal year in October, Navistar said. As of last week, the company had cash and cash equivalents of more than $1 billion.

• Quest Diagnostics Inc. DGX, +3.02% will let go of temporary workers, the CEO and some workers will take pay cuts, and other workers will be furloughed. Quest has performed 800,000, or 40%, of the nation’s COVID-19 testing among commercial laboratories; however, the volume of the other medical tests it conducts sunk 40% during the last two weeks of March as Americans stayed home and avoided going to the doctor. Quest makes testing for a range of conditions and diseases, including some cancers, Alzheimer’s disease and other neurological conditions, and women’s health. About 4,000 colleagues, or 9% of its employee base, have been furloughed

• RealReal Inc. REAL, -2.12% warned of a wider-than-expected net loss for the first quarter, but provided an upbeat outlook on gross merchandise volume (GMV). The company has cut its overall workforce by 10% and furloughed about 15% of its staff, as it has temporarily closed its stores and luxury consignment offices. The company was off to a “strong start” for the quarter until COVID-19 led to shelter-in-place and social distancing mandates. It now expects a first-quarter net loss of $39.9 million to $38.9 million, compared with the FactSet consensus for a loss of $30.4 million. GMV is expected to be up about 15% from a year ago to $258 million; the average estimate of two analysts surveyed by FactSet was $224.5 million, with a range of $156.9 million and $292.0 million. .

• Valero Energy Corp. VLO, +2.27% warned of an adjusted first-quarter loss and revenue miss, citing the effects of the pandemic on the economy and demand for fuel. The company now expects a net loss of $2.10 billion to $1.83 billion. On an adjusted basis, excluding non-recurring items, the company expects a loss of $200 million to income of $160 million. The FactSet consensus is for net income of $14.5 million and adjusted net income of $179.5 million. Valero expects revenue of $20.10 billion to $22.20 billion, below the FactSet consensus of $20.27 billion. Separately, Valero said it deferred $100 million in tax payments that were due in the first quarter, plans to defer other tax payments this year, plans to defer certain capital expenditures, and hasn’t repurchased any shares since mid-March and are analyst various liquidity options.

• Walmart Inc. WMT, +3.23% will reserve the hour between 7 a.m. and 8 a.m. for order pickup for groups most at risk of becoming ill with Covid-19, including those 60 years old and up, first responders and customers with disabilities. The order pickup process follows social distancing guidelines and can be contactless.