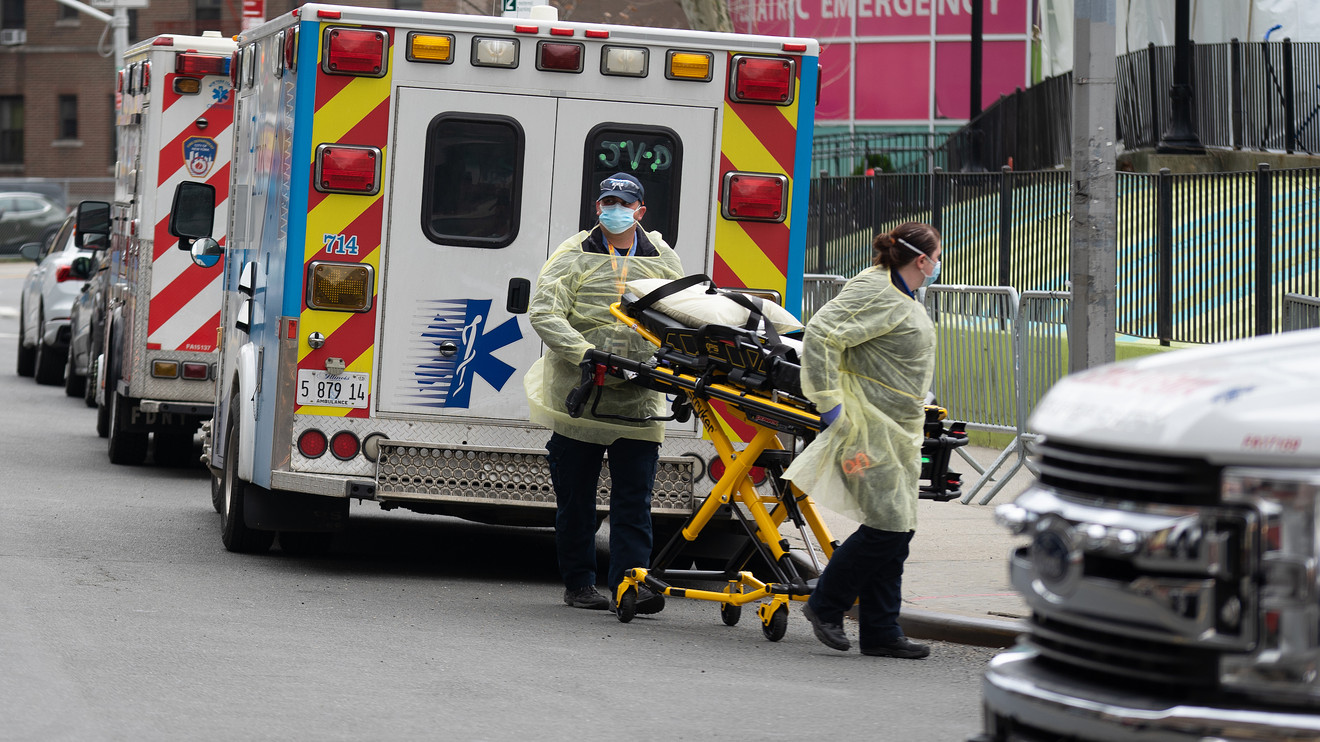 As New York City grapples with the magnitude of the coronavirus death toll, stories are emerging of full hospital morgues and backup refrigeration trucks as funeral directors and cemetery workers cope with at least double their normal workload.

The number of fatalities in the city reached 5,065 on Friday morning, with 1,443 of them in the past 48 hours alone, according to data released by the department of health.

In response, burials have increased, reportedly by fivefold, on the city’s Hart Island, which has long been used by the city as a place to bury its unclaimed dead.

Burials right now on Hart Island are for both COVID-19 victims and as well as deaths from other causes, Mayor Bill de Blasio said on Friday.

Related: NYC trying to account for New Yorkers who may have died from undiagnosed coronavirus

In a tweet, the mayor pushed back against claims that the Bronx island is being used for mass burials, responding to dramatic images of side-by-side coffins in large trenches and videos of digging to create room for more caskets.

The tweet said that he does not anticipate “temporary burials on Hart Island except for the unclaimed.”

“If no one has claimed them, no one has communicated, no one can be found in any way shape or form, they will be buried, temporarily, awaiting hopefully the day when we can find the family members or loved ones,” de Blasio said Friday.

Individuals have 14 days to claim a loved one who has died, according to the Office of the Chief Medical Examiner. The number is reportedly a decline from what is typically a 30-day window.

If the family or loved ones communicate within that two-week period, “even if they can’t come now, that will be handled differently,” de Blasio said.

Read: Jazz pianist Ellis Marsalis, who died at 85 from COVID-19, was the patriarch of a legendary musical family

A further relief measure was announced Thursday evening by Gov. Andrew Cuomo, who said he would issue an executive order to bring additional funeral directors to the state to help with the high number of deaths due to COVID-19.

Though officials have announced that the curve of the crisis is flattening—a result of the stringent social distancing measures in place—citing lower hospitalization rates and ICU admissions, the daily number of deaths continues to be monumental.

“These lives lost are people who came in at that height hospitalization period and we’re losing them,” Cuomo said Friday.

“Either you get treated and get better and get discharged or you stay in the hospital and probably wind up on a ventilator. The longer you’re on a ventilator, the less likely you will come off the ventilator and that’s what’s happening now,” he said.

In New York City, in the roughly 24-hour period between 9:30 a.m. on Thursday and 10:15 a.m. on Friday, 639 coronavirus deaths were recorded, according to data from the city’s department of health. The number is below the record 824 deaths that were logged in the 24 hours prior, the data showed.

In New York state, which now has more confirmed coronavirus cases than any single country, 777 people died between Thursday and Friday, contributing to a total of 7,844 coronavirus deaths in the state.