Home
Stocks
‘We must not give coronavirus a second chance to kill more people’: Brits urged to stay indoors over Easter break
Prev Article Next Article
This post was originally published on this site

The U.K. government warned that it’s “too early” to lift lockdown measures urging Brits to stay indoors over the four-day Easter holiday as temperatures are expected to soar.

The initial three-week lockdown period was due to come to an end on Monday, but Dominic Raab, who has stepped in for hospitalized Prime Minister Boris Johnson, said it was too soon to relax the restrictions as the U.K. is yet to reach the peak of the virus.

See:Boris Johnson out of intensive care as condition improves

A decision on changing the restrictions would not be made until the end of next week, Raab added.

With temperatures set to reach 75° Fahrenheit in some parts of the country this weekend, according to the Met office, ministers are urging the British public to forgo family picnics and Easter-egg hunts and stay at home.

The U.K.’s coronavirus death toll rose by 881 on Thursday to at least 7,978, and the government’s chief scientific adviser, Patrick Vallance, said he expected deaths to keep rising for two weeks after the intensive-care numbers drop, which hasn’t happened yet.

Addressing the nation Thursday night, Raab said: “Looking forward to the bank-holiday weekend, I know people are going to start wondering, ‘Is it time to ease up on the rules?’

“Thank you for your sacrifices, but we are not done yet,” he said. “We must keep going.”

The coronavirus-borne COVID-19 disease, Raab added, cannot be given “a second chance to kill more people.”

The foreign secretary acknowledged that people would have organized family get-togethers or be tempted to go out in the sunshine with friends. “Unfortunately, right now, we just can’t do this sort of thing. I’m really sorry about that. We must stick to the plan.”

Concerns that the public were becoming increasingly complacent rose last weekend after many of London’s parks were busy with walkers and runners enjoying the April sunshine, forcing the police to intervene as people sunbathed and gathered in groups.

One of London’s most popular parks, Brockwell Park, was closed on Sunday after Lambeth Council said people had used the 125-acre park near Brixton for sunbathing and large gatherings a day earlier.

The park reopened this week and was busy with runners and walkers and the odd larger group. The council has urged people to follow the guidelines — only using the park for daily exercise — or see it closed again. 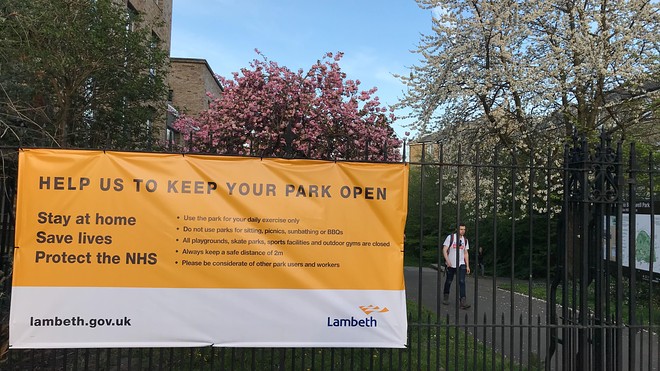 Local councils have since been urged by the government to only close parks and open spaces as a “last resort.”

Communities Secretary Robert Jenrick told the BBC that councils should be “very judicious” in taking the step to close parks. “That really is an absolute last resort and should be because we want people to be able to go out and have exercise. It is not to congregate with other people, to have a barbecue or a picnic and to put people’s lives in danger by breaching the social-distancing rules.”

But the police have warned that officers face mounting challenges in enforcing the new guidelines. Simon Kempton, COVID-19 operational lead for the U.K.’s Police Federation, said: “The vast majority of people get it, they understand why it’s important, and they want to comply, but there are still some who simply do not want to comply.

“[Over the weekend] some of my colleagues had a monumental task, with one or two officers emptying a park with hundreds of people. Most of those people were arguing their case as to why they were doing something within the guidelines.”

He added that verifying whether it was someone’s first exercise of the day — one of the only reasons Brits are permitted to leave their homes — was “close to impossible” and that education, along with a clear government message, was key.

The relationship between the police and the public is also a major concern among officers, Police Superintendents Association president Paul Griffiths said earlier this week. “The vast majority of the public have been very supportive of the police, but there are extreme and vile behaviors going on, including spitting and coughing on officers.”

Neighboring Ireland has imposed tougher measures than the U.K.’s leading into the Easter weekend.

Ireland’s minister for health, Simon Harri,s has given the Garda, the country’s national police force, new powers to enforce restrictions on people’s movements and gatherings over the next five days, including issuing fines of up to €2,500 for those flouting the lockdown rules.

Speaking at the daily press briefing in Dublin, Garda Commissioner Drew Harris said there will be more than 50 checkpoints set up across the country this weekend as Ireland prepares to enforce “Operation Fanacht,” meaning, in Irish, “stay where you are.”

“Visiting family members if there’s a critical need is essential, but delivering Easter eggs is not a critical need,” Harris said, stressing that fines and arrests would be a “last resort.”