Home
Stocks
In One Chart: Coronavirus crisis will leave 3 lasting scars, even if the economy recovers in fourth quarter, Pimco warns
Prev Article Next Article
This post was originally published on this site

The U.S. economy is in the midst of one of the deepest, most painful recessions the country has ever seen, but, as long as the pieces fall into place, it could also prove to be one of the shortest, according to a blog post from Joachim Fels, global economic adviser at Pimco.

“Unlike previous recessions, usually caused by the interplay of economic and financial imbalances, interest rate hikes, or oil price spikes, the trigger of the present crisis is an exogenous shock,” he wrote. “We are seeing the first-ever recession by government decree — a necessary, temporary, partial shutdown of the economy aimed at preventing an even larger humanitarian crisis.”

Here’s a simple look at Pimco’s base case: 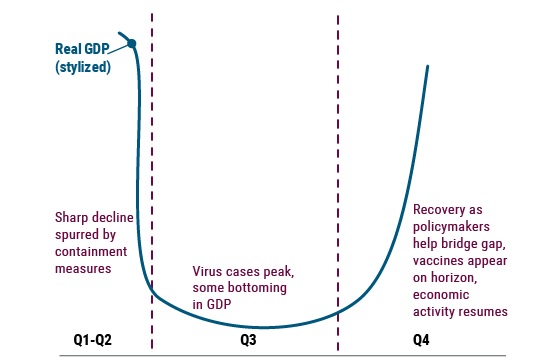 “Given the sheer size of support measures and the absence of major real economic imbalances, we expect the global economy to transition from intense near-term pain to gradual healing over the next six to 12 months, once the spread of the coronavirus is under control and restrictions are lifted,” Fels said, adding that restrictions will be lifted only gradually and at different speeds.

Regardless of how quickly the economy recovers, Fels said the crisis will leave three long-term scars.

First, he warned that globalization may be dialed back.

“Firms may try to reduce the complexity and risk of global supply chains, and governments may use health concerns to curb trade, travel, and migration,” he said. “Companies, sectors, and countries that are highly dependent on trade and travel may see a lasting hit to their business models.”

Then, there’s the increased private and public debt that could challenge central-bank independence and also keep interest rates low to finance deeper deficits.

“If governments continue their fiscal expansions even after the crisis, the dominance of fiscal over monetary policy may lead to higher inflation than markets currently price in,” he wrote. “But with central banks capping the rise in nominal yields that would normally result from higher inflation, real rates would tend to fall as inflation rises.”

Lastly, there will be a shift in how people save their money, as unemployment and debt could put pressure on households to take a much more cautious approach to their financial future. That could mean less of an appetite for risk-on assets. It could also mean paying down mortgages faster.

“With the private sector saving glut likely to rise further,” Fels said, “investors should brace for a New Neutral 2.0 of even more depressed real interest rates over the secular horizon.”

All in all, according to Pimco’s broader outlook, investors should get read for a completely different investment landscape once the economy starts to heal.

“While this should create more attractive entry points in higher-risk segments of the investment universe over time, we remain patient and focus on opportunities that we see as high quality, default-remote assets for now,” Fels wrote. “We believe a caution-first approach is warranted in an effort to protect against permanent capital impairment.”