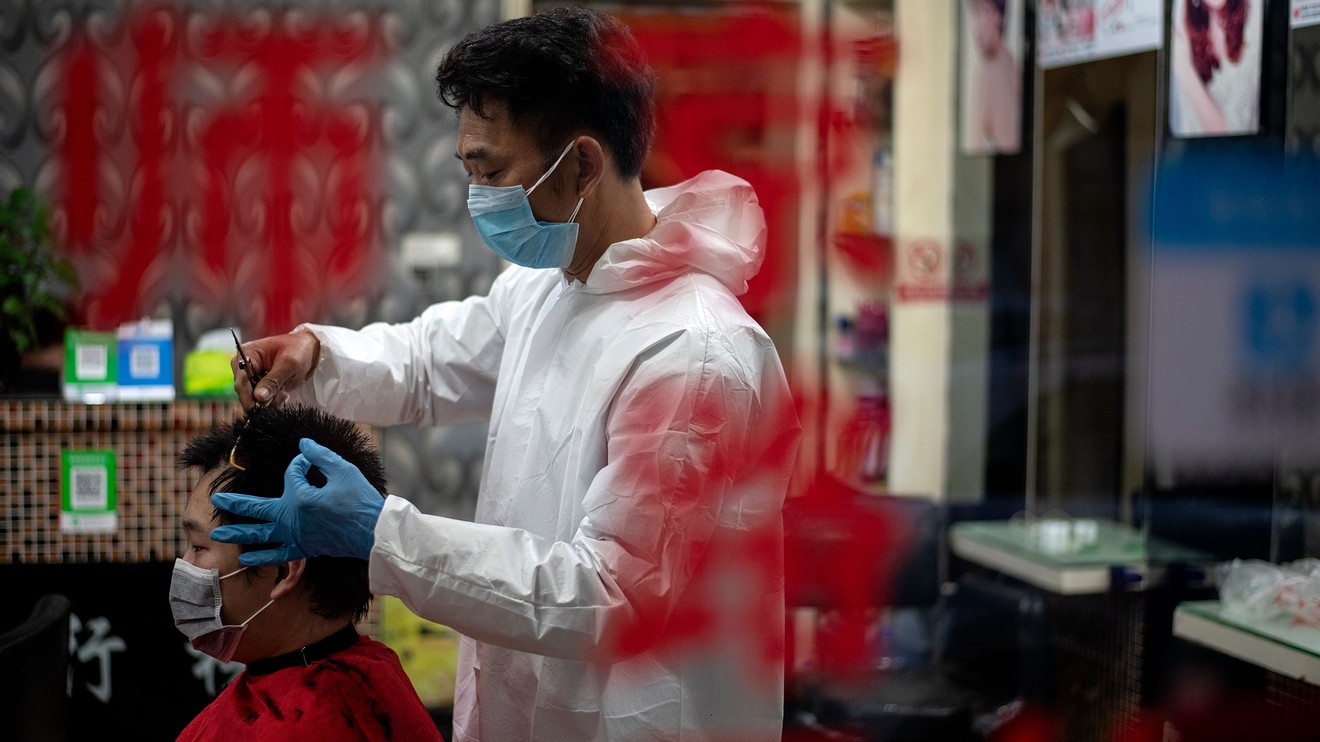 The Chinese city of Wuhan reported zero deaths Tuesday from the coronavirus that causes COVID-19 for the first time since January, according to media reports, raising hopes that China’s extraordinary containment measures are having an effect and could be reproduced elsewhere.

Wuhan, the city that first reported cases of COVID-19 late last year, is preparing to come out of lockdown on Wednesday when travel restrictions are expected to be lifted. The city was placed in quarantine on Jan. 23 via stringent restrictions on movement, forcing its 11 million residents to hunker down and avoid spreading the virus and overwhelming the health-care system.

State news agency Xinhua said some areas of the city will remain under lockdown, as officials track asymptomatic cases, which were not included in early tracking. China has reported 82,718 cases of the virus and 3,335 deaths, although some have questioned the accuracy of those numbers. Chinese officials are now working to avoid a second wave of infections being brought in from overseas.

Japan declared a state of emergency for Tokyo and other areas for at least a month, after the number of cases more than doubled in a week.

Read now: What we can learn from South Korea and Singapore’s efforts to stop coronavirus (besides wearing face masks)

In Europe, the rate of deaths from the pandemic rose in Spain for the first time in five days with 743 new fatalities, disappointing hopes that the worst was over for the country with the highest case tally in Europe. In the U.K., Prime Minister Boris Johnson remained in an intensive care unit where he was moved late Monday after his symptoms worsened.

In the U.S., there is growing concern that voters in Wisconsin may expose themselves to the virus by voting in person in a presidential primary election, after efforts by its Democratic Gov. Tony Evers to postpone the ballot were stymied. The conservative-controlled Wisconsin Supreme Court on Monday sided with Republicans who said he didn’t have the authority to reschedule the race on his own, the Associated Press reported. Conservative justices on the U.S. Supreme Court quickly followed with a ruling blocking Democratic efforts to extend absentee voting.

The U.S. still has the most case of the virus at 369,069 and at least 11,018 deaths, according to data aggregated by the Center for Systems Science and Engineering (CSSE) at Johns Hopkins University.

New York Gov. Andrew Cuomo said the state recorded its biggest one-day increase in deaths from the coronavirus that causes COVID-19 on Tuesday, as 731 fatalities brought the tally to 5,489. There are now 138,836 cases of the virus in New York, making it the epicenter of the U.S. pandemic. The number of new hospitalizations also rose, said Cuomo, but the three-day average has fallen, raising hopes that the state is reaching an apex for hospitalizations. Daily moves into intensive-care units and intubations were also lower, he told reporters at a daily briefing.

India lifted a temporary export ban on hydroxychloroquine, an anti-malaria drug that President Donald Trump has aggressively touted as a treatment for COVID-19, despite there being little evidence to suggest it is effective. The lifting of the ban is understood to have come after Trump pressured Indian Prime Minister Narendra Modi in a weekend call.

India is the biggest maker of the drug, which has not been approved by the U.S. Food and Drug Administration for the virus. Health care officials have reported shortages of the drug for patients with lupus and rheumatoid arthritis, two indications for which it is approved.

Don’t miss: There’s scant evidence so far for chloroquine as a COVID-19 drug — but there’s already a shortage

The head of the Securities and Exchange Commission said companies should disclose to investors if they are planning to tap bailout programs. SEC Chairman Jay Clayton said investors are clamoring for information on the companies in which they own stakes and want to know how the virus and stay-at-home orders are impacting their business.

See:These 19 companies are working on coronavirus treatments or vaccines — here’s where things stan

Here’s what companies said about COVID-19 on Wednesday:

• AT&T Inc. T, +4.04% has a “strong” cash position and “attractive” liquidity. The company had $12 billion in cash on hand at year-end, received $4 billion from preferred stock issuances in February, cancelled in March a $4 billion accelerated stock repurchase plan and suspended all other share buybacks. The company now has a $5.5 billion term-loan agreement with 12 banks and $15 billion revolver that it doesn’t expect to draw on this year. AT&T plans to continue paying its dividend.

• AutoZone Inc. AZO, +4.75% is offering workers an emergency time off benefit of 80 hours for full-timers to help them deal with the impact of the coronavirus pandemic. The car parts retailer has been deemed an essential service by the federal government and has been able to keep its stores operating, but has shortened opening hours to allow for enhanced cleaning and has introduced a curbside pickup service for customers. To improve liquidity, AutoZone has closed on a new 364-day senior unsecured revolving credit facility of $750 million. The new facility comes on top of a recently completed sale of $500 million in 3.625% notes that mature in 2025 and $750 million of 4.000% notes due 2030. The company has temporarily suspended share buybacks. It has about $1.9 billion in available capacity under a $2 billion, multi-year credit facility.

• Darden Restaurants Inc. DRI, +15.78% has $1 billion in cash on hand, after drawing down $750 million from its revolving credit agreement. The parent of Olive Garden now has a new $270 million term loan credit agreement. Cash burn rate at the current sales level and with the to-go format is $25 million a week. Darden said same-restaurant sales for the fourth quarter to April 5 slumped 39.1%, with same-restaurant sales falling 75.2%, 74.9%, and 71.2% for the last three weeks, respectively.

• Estée Lauder Cos. EL, +3.13% has borrowed $1.3 billion from a $1.5 billion credit facility. The beauty company had another $200 million in commercial paper outstanding as of March 31. Stores have begun to reopen in Asia Pacific and online sales have accelerated, but stores are closed in the Americas, Europe, Africa and the Middle East.

• Exxon Mobil Corp. XOM, +5.56% is reducing its 2020 capex budget by 30% and lowering cash operating expenses by 30% as it works to combat the effect of lower commodity prices due to oversupply and demand weakness caused by the coronavirus pandemic. The oil giant said capital investments will fall to about $23 billion from a previously announced $33 billion. The company is maximizing production of products needed to combat the virus, including isopropyl alcohol, which is used to make hand sanitizer, and polypropylene, which is used to make protective masks, gowns and wipes.

• USA Today publisher Gannett Co. Inc. GCI, +5.35% has adopted a shareholder rights plan, also known as a poison pill, to preserve and protect its tax loss carryforwards from a change in control. The rights plan will be exercisable if any new investor or group acquires 4.99% or more of Gannett’s outstanding shares. Gannett’s ability to use its $435 million worth of net operation loss carryforwards (NOLs) could be substantially limited if an “ownership change” was experienced.

• Hologic Inc. HOLX, +5.85% delivered preliminary sales results for its fiscal second quarter while pulling its full-year outlook. The company expects to report $756.1 million in revenue for the quarter, down from $818.4 million a year earlier. Analysts surveyed by FactSet are expecting $752 million. The COVID-19 outbreak had a “significant negative impact” on the business in late March, limiting sales of breast-health products as medical centers curtailed access to their facilities. Sales of GYN surgical and diagnostic products were also hit.

• Lowe’s Cos. [ LOW, +5.31% will close all stores this coming Easter Sunday to allow its 300,000 workers to spend time with family. “We will take steps to ensure that no hourly associate loses scheduled hours or has a reduction in pay as a result of closing on Sunday,” the Mooresville, N.C.-based home-improvement retailers said.

• NXP Semiconductors NV NXPI, +4.06% expects to report $2.02 billion in March-quarter revenue, down 3.5% from a year earlier and below the midpoint of the company’s March 2 forecast. Analysts surveyed by FactSet were modeling $2.12 billion. “While the supply chain disruption experienced post Lunar New Year in China appears to be subsiding, the end market demand trends in the rest of the world have started to significantly deteriorate,” the company said. These headwinds worsened throughout March in the automotive market as many auto makers worldwide have shut down production lines. Weaker consumer demand in the industrial and mobile markets has caused orders to be pushed out.

• Quorum Health Corp. QHC, +0.76% formally signed on to a restructuring support agreement to reduce its debt by $500 million. The hospital operator filed for chapter 11 bankruptcy with $100 million in debtor-in-possession financing and a $200 million equity commitment. Quorum operates 23 acute-care hospitals in 13 states; most of its hospitals are located in rural or midsize communities.

• Tractor Supply Co.’s TSCO, +0.91% first-quarter sales rose to $1.96 billion, up from $1.82 billion last year, ahead of the FactSet consensus for $1.89 billion. Tractor Supply benefited from stocking-up activity in March after a decline in cold-weather items in January and February, due to unseasonably warm weather. Same-store sales in March were up 12%, with same-store sales for consumable items up 20% for the month. The company now expects first-quarter earnings per share of 69 cents to 71 cents, exceeding the FactSet consensus for 62 cents.

Permission Slips and Tracker Bracelets: How Are Quarantines Enforced?