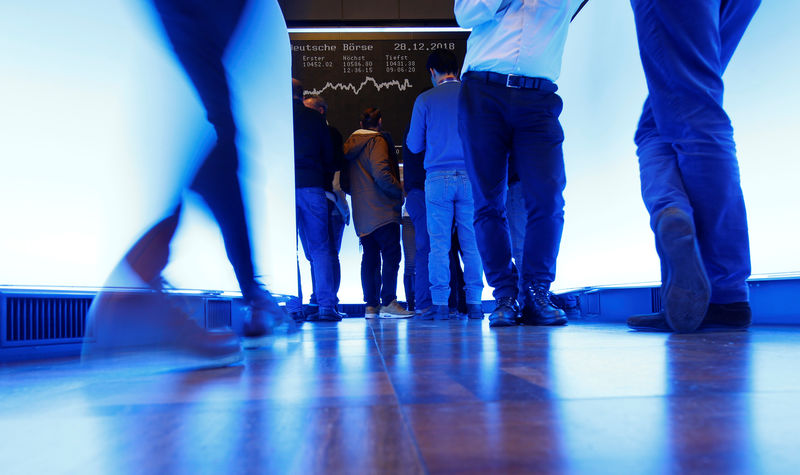 Investing.com – European stock markets are set to open firmly higher Monday, with investors buoyed by signs of a slowdown in coronavirus-related deaths in the region, and by expectations of more financial aid to help bolster its battered economies.

The number of infections and deaths have fallen in recent days in Italy and Spain, the two European countries worst hit, as well as in Germany, the region’s most populous country.

This news has raised hopes that the European continent may be on the road back to something approaching normality, although British Prime Minister Boris Johnson was taken to hospital on Sunday suffering from persistent coronavirus symptoms.

Adding to the positive tone were comments from U.S. President Donald Trump, who expressed hope on Sunday that the country was seeing a “levelling off” in the U.S. hotspots, saying he saw “light at the end of the tunnel”.

New York, the epicenter of the US outbreak, reported Sunday a drop in the number of new infections and deaths but, even so, has registered more deaths than the Chinese state of Hubei, where the virus originated.

Eurozone finance ministry officials are set to hold discussions this week about how best to aid poorer states buckling under the coronavirus strain.

The subject of joint ‘coronabonds’ is sure to be raised again, but more likely options include credit lines from the euro zone’s bailout fund, more lending from the European Investment Bank and using a joint long-term budget directly for guarantees for leveraged borrowing.

In corporate news, HSBC (LON:HSBA) will be in focus after Fitch Ratings downgraded the banking giant’s outlook to negative from stable, citing material downside risks from the economic and financial market fallout from the pandemic. Still, the agency maintained its A+ long-term default rating.

HSBC announced last Wednesday that it would cancel dividend payments, although with the majority of its peers, from the fourth quarter of 2019 for a 12-month period, following a request from the United Kingdom’s chief regulator, the Prudential (LON:PRU) Regulation Authority.

Oil prices edged lower Monday as a group of major oil producers, known as OPEC+, delayed a meeting scheduled for later in the day to Thursday.

The announcement of the meeting, called last week to mediate a truce between Saudi Arabia and Russia in their ongoing price war, sent oil prices soaring last week.

But tensions between the two producers led to a three-day postponement and increased investor fears that these latest talks will also end in failure like its last meeting in March.

The head of Russia’s sovereign wealth fund, Kirill Dmitriev, said Russia and Saudi Arabia were “very, very close” to a deal, although President Donald Trump’s efforts to persuade U.S. companies to cut production came to nothing at the weekend. Trump instead threatened to levy tariffs on imports of foreign oil, something that would depress prices further outside the U.S.