Home
Stocks
Market Extra: How the Fed’s historic leap into buying corporate debt is working even before the purchases formally start
Prev Article Next Article
This post was originally published on this site

When T-Mobile TMUS, -2.87% borrowed $19 billion in the investment-grade corporate bond market on Thursday to finance its acquisition of Sprint Corp US:S, bond investors poured an estimated $65 billion worth of orders into the debt deal.

FedEx Corp FDX, -6.36% on Friday secured another $3 billion, partially through the sale of 30-year debt at a 5.25% coupon, according to a person with direct knowledge of the transaction.

The raft of borrowing to kick off April, while at higher costs than before the pandemic took hold in the U.S., comes in addition to the $528 billion already lent to highly rated U.S. companies through corporate bond sales in the first quarter, the fastest start to a year ever. 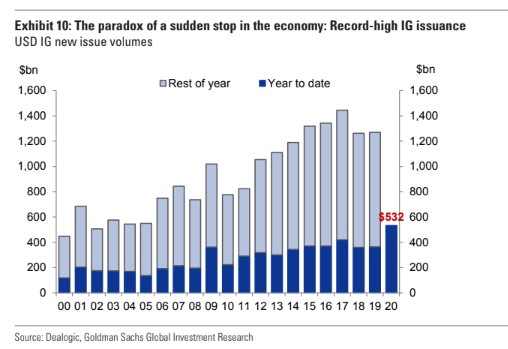 Why are top U.S. businesses able to borrow record amounts of debt during a pandemic that has resulted in 6.6 million jobless claims that some economist fear could soon near Great Depression levels?

“Companies are issuing a lot of debt, and the reason why is simply because they can,” said Matt Brill, head of U.S. investment grade at Invesco Fixed Income, who called the Fed’s planned first foray into buying corporate debt a “game-changer,” even before it gets under way.

“The timing is clearly what everybody wants to know,” he told MarketWatch Friday, adding that without the Fed’s planned backstop things would look at lot worse.

“If there was no ability to issue corporate debt right now, that would be a huge negative,” Brill said. “Companies would be running out of cash. But instead, you’re seeing the exact opposite.”

Besides turning to the bond market, U.S. companies also are drawing down their credit lines and making use of revolving lending facilities to stockpile cash.

Analysts at BofA Global Research tracked more than $100 billion worth of credit lines that have been drawn by more than 140 U.S. companies over the past few week. This comes in addition to their roughly 20% use of revolver capacity available to U.S. investment-grade companies.

All this borrowing comes as businesses brace for tough times ahead, previewed by Friday’s grim jobs report, which left the Dow Jones Industrial Average DJIA, -1.68%  lower by 1.7%.

Credit Suisse economists led by James Sweeney said they now expect the second quarter of the year to rank as one of the worst for global growth since World War II, with the U.S. seeing the value of its goods and services, or gross domestic product, plunge 21%.

“The services sector, which is typically one of the steadiest parts of the economy, will see extreme weakness as people are advised to remain inside and avoid unnecessary contact,” the team wrote in a client note. “Spending on restaurants, air travel, hotels, and live events will see a near-term decline many multiples of their largest historical moves.”

Yet, there is room for optimism even as the U.S. economy sits mostly at a standstill. After suffering record outflows in March, investment-grade bond funds and exchange-traded funds (ETFs) saw only $9.66 billion flee their platforms in the past week ending March 25, down from more than $40 billion in each of the two prior weeks, according to BofA data.

Furthermore, Hans Mikkelsen’s team at BofA underscored that while the Fed’s two new corporate debt buying facilities are initially funded with $10 billion of equity each, both can be leveraged 10 times and have another $425 billion of additional capacity.

“PepsiCo PEP, +0.58%, one of the few issuers able to tap the new issue market at the height of the 2008/2009 financial crisis, was among the first issuers to come to market following the Fed announcement,” wrote Mark Heppenstall, chief investment officer at Penn Mutual Asset Management, in a client note.