The Federal Reserve is bringing to bear its considerable might to support the flow of credit in the economy, deploying emergency lending programs and outright bond purchases to maintain liquidity in debt issued by corporations, municipalities and the U.S. own government.

But the enormous amount of funds the Fed has deployed won’t make its way into a large swathe of financial markets — notably the more leveraged companies.

Allowing these “orphan” markets to wither could undermine the Fed’s goal of supporting the flow of credit in an economy in the midst of seizing up, said Krishna Guha, vice chairman at Evercore ISI and a former official at the New York Fed, in a Thursday note.

In the chart below, analysts at Evercore ISI show what parts of the market will receive the Fed’s support and which assets are “orphaned,” leaving them to the caprice of investors dumping any investments that appear risky.

Among the more than $9 trillion of “orphan” assets are loans and bonds from issuers rated below investment-grade and securitized bonds such as collateralized loan obligations. 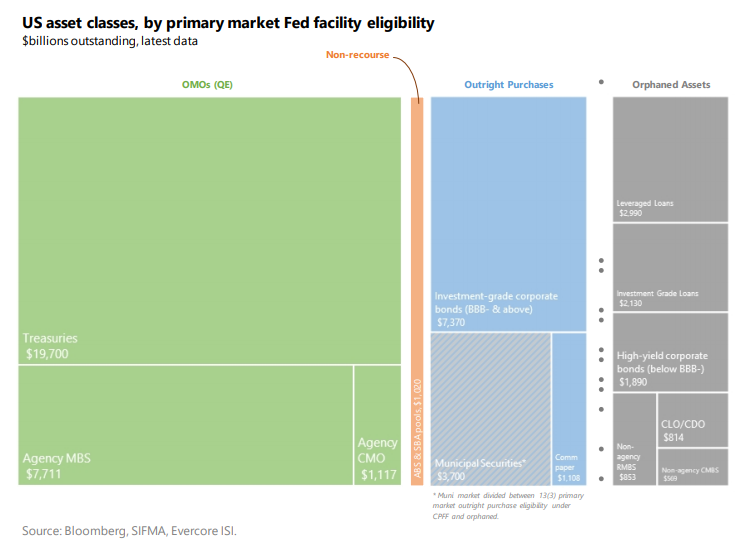 Worries around orphaned assets have tended to focus on issuers of high-yield corporate bonds, or “junk” debt, which has fared considerably worse than its investment-grade peers.

Part of the logic for limiting aid to highly indebted companies or investment vehicles exposed to high levels of credit risk is that the Fed could run into moral hazard issues, the idea that companies may feel free to lever up in the knowledge that the central bank will provide a backstop.

In Guha’s view, the moral hazard issues were better dealt by lawmakers in Congress or regulatory change.

Analyst Roberto Perli at Cornerstone Macro argued that following this line of logic could hurt creditworthy businesses that are downgraded into “junk,” or non-investment grade, as a result of a coronavirus-driven recession, ruling them out of the Fed’s lending programs.

It’s why Guha doesn’t think the Fed’s work is done. He still sees the Fed setting up new programs to provide help to these “orphan” assets in the future.