Home
Stocks
The Conversation: Hundreds of different coronavirus tests are being used — which is best?
Prev Article Next Article 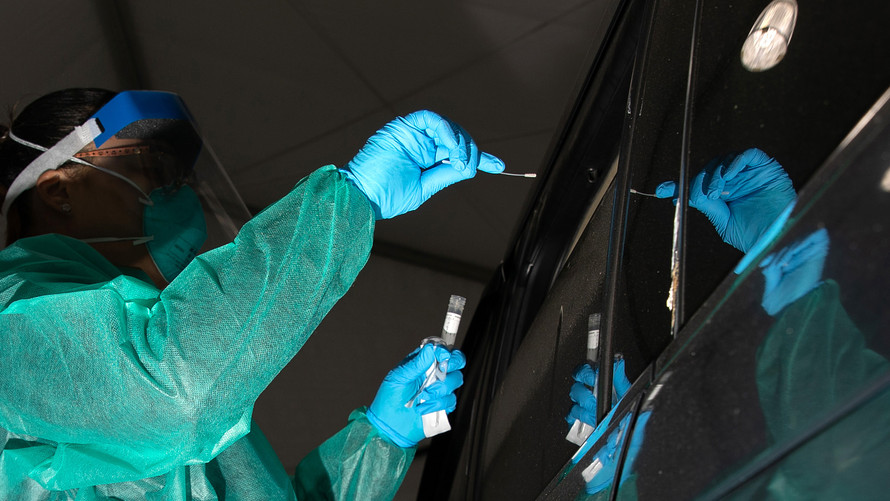 A doctor administers a coronavirus swab test at a drive-through testing center in the Bronx.

it causes, the situation is about as messy as it gets.

The U.S. went from having no tests, or assays, available for COVID-19 diagnostics to having multiple different tests available in a span of just a few weeks. Today more than 230 test developers have alerted the Food and Drug Administration that they are requesting emergency authorization for their tests; 20 have been granted. And 110 laboratories around the country, including my own, are also using their own tests. Having this number of diagnostic tests available to detect a single virus in such a short time frame is unprecedented.

Which tests are good and which tests are bad isn’t immediately apparent. According to a March 30 press release from the FDA, “The FDA revised the process to allow labs to begin testing prior to FDA review of their validation data. This policy change was an unprecedented action to expand access to testing.”

The guidance the FDA provides to test makers requires laboratories provide some evidence of their assay’s performance and consistency in results. It also ensures that reasonable thought is put into assay design. Assays meeting these requirements may then be permitted for clinical use prior to receiving approval by the FDA.

I am a physician scientist who studies viruses in my research laboratory and directs a clinical microbiology facility for a large hospital system. Since COVID-19 made it to the U.S., laboratory directors like me haven’t had a spare moment to focus on anything other than developing tests to respond to this pandemic.

There’s still a lot to learn

SARS-CoV-2 is the virus that causes the disease. It is a novel virus from the coronavirus family that was first identified in November 2019 in Wuhan, China. Like other viruses, this one is believed to have first infected animals and then jumped over to humans. Because of their zoonotic origins, these viruses are often ill-suited to spread from person to person. What makes COVID-19 so different is it’s readily spread between people, which lies at the heart of the current pandemic.

There is a lot that we just don’t yet know about COVID-19.

For example, for most respiratory viruses we develop antibodies that protect us from getting infected by them again. This is referred to as immunity. We assume that we’ll develop immunity from having been exposed to COVID-19 infections, but it hasn’t exactly been around long enough for us to know this for certain. Will this virus mutate so that our immunity won’t work? Will this virus become seasonal, much like the flu? Only time will tell.

Developing a test to detect this novel virus has been at the center of the efforts in the U.S. to combat its spread. If infected people can be quarantined early, they are much less likely to transmit it to others.

But right now there are at least 22 different COVID-19 tests on the U.S. market, not including at least 110 developed by individual laboratories across the country. So you many be wondering: Why do we need so many?

Why so many different tests?

Most of the available tests are based on collecting the virus’s RNA (ribonucleic acid) and converting it to DNA (deoxyribonucleic acid). This is the easy part of test development because all these tests use the same basic methods. The next step is making many millions or billions of copies of the DNA so that it can be detected. This is where most tests differ. COVID-19 is a large virus with many different genes that can be used to detect it. While one test may target one or more virus genes, another test may target a completely different set of genes.

The World Health Organization developed testing specifications for COVID-19 in January 2020. The U.S., led by the Centers for Disease Control and Prevention, developed separate testing specifications in early February 2020. The CDC started off as the single testing center for the U.S., but as demand rose, they distributed their test to public health laboratories across the country. This first CDC test probed the sample for three short sections of the virus’s genetic material.

Within days, testing kits manufactured and distributed by the CDC were proven to be problematic, likely from impurities in the testing materials that caused them to provide faulty results.

Despite increasing testing demand and problems with the CDC assay, the FDA remained steadfast that hospitals, academic centers and companies were not to develop their own COVID-19 tests.

These regulations were lifted at the end of February 2020, and centers across the U.S. were finally free to develop their own tests. There was so much pent-up energy to develop COVID-19 tests that the country rapidly ended up with a surplus of different tests. Because the U.S. never settled upon a single standard for detecting the virus, companies, hospitals and academic centers were left to their own devices to forge their own paths forward.

So which test is the best available right now in the U.S.? There’s no certain answer. None of these tests from different manufacturers have been around long enough to know which is best at detecting the virus.

The most common question I get asked is, “What is the accuracy of my institution’s COVID-19 test?” It’s impossible to answer because my institution uses five different tests, each of which will likely have different performance characteristics. These tests generally differ in the virus’s genes they target and the laboratory instrumentation on which they are performed. We have tests that can detect as few as 100 copies of a virus gene and tests that require as many as 400 copies for detection. We have chosen to use so many tests because testing kits to detect the virus are so limited that when we run out of kits from one manufacturer, we switch to another.

It is inevitable that we will learn that some tests are better than others. They were all developed so quickly that it’s unlikely they’ll have the same performance characteristics. We can only hope that none of the assays currently in use performs poorly.

Many of us laboratory directors in the U.S. have a love-hate relationship with the FDA. We love the FDA because their stringent oversight helps to protect us from using products that don’t work well. The hate stems from their standards being so high that products often come to market in Europe and Canada before they make it to the U.S.

The FDA took a decidedly different approach to regulating COVID-19 diagnostics. Due to the dearth of available testing in the U.S., they allowed hospitals, academic centers and companies to develop their own tests and begin using them if they could meet minimal standards.

The FDA will eventually do their due diligence in evaluating the COVID-19 tests that are available. Until that happens, we may have tests in use in the U.S. that don’t live up to their normal high standards.

David Pride is associate director of microbiology at the University of California San Diego. This was first published by The Conversation — “There are many COVID-19 tests in the US – how are they being regulated?”

More on the coronavirus: