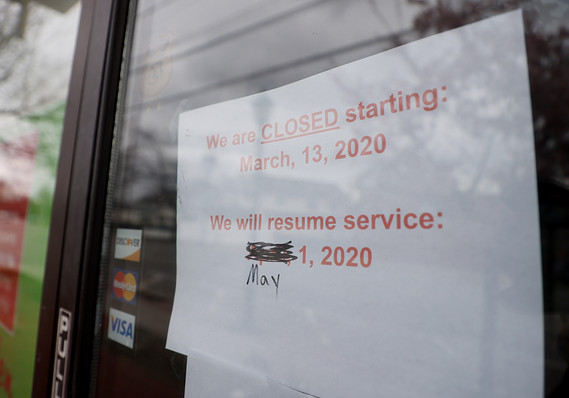 The economic impact of the coronavirus is well upon us. Though not yet officially declared, we are certainly now in a recession. Nearly 10 million workers applied for unemployment insurance benefits in the last two weeks, and we will see more in coming weeks. I have been a labor market economist for a long time—including through the Great Recession—and I have never seen anything like this.

Congress just passed a bill that, while problematic in important respects, will reduce the hardship for millions of people who are out of work because of the virus. The most effective parts of the bill are a $600 increase in weekly unemployment insurance checks and the creation of a special disaster relief program that expands unemployment insurance coverage to many of those who fall through the gaping holes in our current system, including gig workers and the self-employed.

But it is important to remember that mass unemployment as a result of the coronavirus did not have to happen—in fact, policy makers twice missed the chance to avert widespread job loss.

First, the failure to take the coronavirus seriously early on and to implement rapid and accurate testing means we cannot now distinguish between those who are sick and need to be quarantined, and those who are healthy and could largely continue normal activity. This in turn means that to avert a much greater disaster, we have no choice but to enforce widespread lockdowns rather than more targeted quarantines.

In other words, the lack of early response turned a public health threat into an economic recession, which will continue at least as long as our testing and tracing capability is insufficient.

Moreover, even after we failed to test for the virus on a sufficient scale and control its spread, we still could have protected jobs. Other countries have chosen to compensate coronavirus-impacted employers for close to the entire amount of their workers’ salaries, as long as they keep their workers on payroll.

Making it possible for businesses to keep workers on payroll is crucial because at some point, hopefully sooner rather than later, the threat of the virus will be over, and the economy will be able to restart. People who have been on lockdown will be very excited to go out to restaurants and do other things they have missed out on (count me among them!).

But that sudden surge in demand could go one of two ways. If employers still have their workers on payroll, they will be able to turn the lights back on and deal with the rush of customers. But if they had to lay off workers, they will need to spend great deal of resources posting jobs, interviewing, hiring, onboarding, and training. This scramble to re-match workers with jobs will prolong the pain of the recession much longer than necessary.

And for workers, not losing their job would obviously matter enormously. For one, it would mean being able to hold on to employer-provided health benefits.

But it would also mean that these workers —and their families—would not face the long-term scarring effects of job loss. Losing a job can have lasting effects on earnings and can negatively affect the whole family for years. For example, research shows that children whose parents were laid off have lower earnings as adults than other children.

Recent bill does have good provisions

The bill that passed Congress does have some provisions that will preserve jobs.

For example, it makes clear that workers who are furloughed because their workplace closed due to the coronavirus will be eligible for unemployment insurance benefits and provides businesses with a payroll tax credit for keeping workers on health insurance. The bill also includes loans for small businesses that will be forgiven if the money is used to preserve jobs and wages. These measures will incentivize employers to keep workers on payroll.

However, a glaring hole in the bill is the fact that its single biggest tranche of money goes towards industry bailouts that do not include adequate safeguards to ensure that the money is used to preserve jobs, rather than to preserve the wealth of shareholders, creditors, and corporate executives.

This is a mistake that will cause lasting harm to workers who would have kept their jobs if the conditions on the bailouts had been stronger, and it will prolong the downturn.

Based on new GDP forecasts, we project that nearly 20 million workers will be laid off or furloughed by July as a result of the coronavirus shock. These lob-loss estimates are based on GDP forecasts by Goldman Sachs that, shockingly, include the impact of the $2 trillion relief package that was passed last week and also assume another relief package will be passed that will focus on aid to states, which is a particularly effective form of stimulus.

In other words, far more than 20 million workers will be laid off or furloughed unless we get another relief and recovery package that includes a substantial amount of state aid.

Though we should have acted sooner, Congress should now turn to crafting another relief package that includes not just state aid but also includes policies to encourage employers to keep workers on payroll or on furlough during the lockdown—rather than laying them off—so as few families as possible face the near- and long-term consequences of job loss and so that workers are ready to jump back in to work as soon as the lockdown is over.

This article was originally published by the Economic Policy Institute — Policymakers twice missed the chance to avert widespread job loss, now they should act to avoid more layoffs.

Heidi Shierholz is senior economist and director of policy at the Economic Policy Institute. From 2014 to 2017, she was chief economist at the Labor Department.