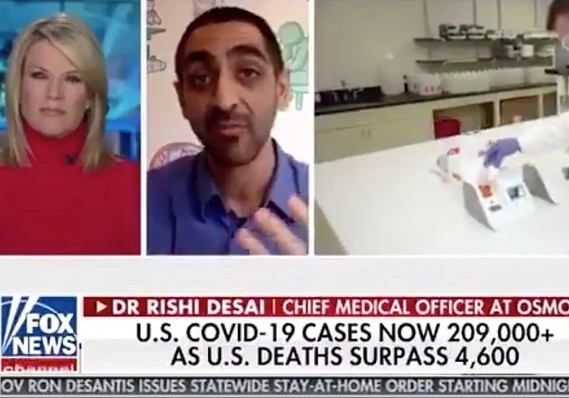 “Look at what South Korea did, and what we did. Their population is one-sixth of ours,” he said. “Look at the cases they have. Look at the mortality they have. It’s a trifle compared to what we’re dealing with right now because we’ve had a very weak response and they had a really strong response.”

Shares of Abbott Laboratories ABT, +2.10% soared earlier this week after the company said it had received emergency FDA approval for a five-minute test, which Desai referred to on the Fox News show.

Earlier in the interview, Desai made the case for a sweeping national shutdown, saying Fox News viewers could take optimism from the projected outcome. “We would see a drop-off in cases within two weeks,” he said. “Within two weeks, the number of cases would start to fall, and the entire country would breathe a sigh of relief.”

While much of the media has been critical of the White House during the pandemic, the high-profile personalities of Fox’s prime-time lineup have maintained a steady defense of the president. So when Desai voiced his opposition, he instantly became a Twitter TWTR, -0.94% favorite:

How to ensure you don’t get follow-up questions on Fox, apparently. pic.twitter.com/nOUqw4ZVhO

He went on Fox News tonight & spoke truth to their viewers — giving hard facts a/b the shortage of testing & the unforgivably slow response to this #COVID19Pandemic from the Trump admin.

So Dr. Desai won’t be invited back onto Fox News but God damn it was worth it.pic.twitter.com/tUN5ZkqGK7

The Official “Dr. Desai” Head Nod that he made legendary tonight is a mood. Learn it.

No doubt her producers were yelling in her ear to shut this segment down STAT!