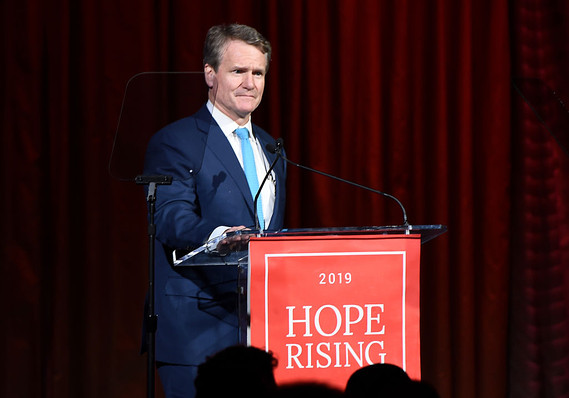 Bank of America CEO Brian Moynihan is tackling the greatest threat to humanity and the economy in generations and trying to do the right thing for his shareholders, clients and employees.

But he’s not going to fret about the short-term impact to one of the nation’s largest banks, and one of the most widely traded, as it tries to navigate the brave new world that has been created by COVID-19.

When you’re a company that depends on serving customers well and when that comes down to your team, nickel-and-diming is a dumb thing right now.

Asked by Barron’s, during a phone interview on Thursday, about the cost in the coming quarters of B. of A.’s efforts to deal with the fallout from shutdowns and business slowdowns wrought by the viral outbreak, Moynihan said he was focused on clients, customers and employees:

“When you’re a company that depends on serving customers well and when that comes down to your team, nickel-and-diming is a dumb thing right now,” he said.

B. of A said it won’t lay off workers during the coronavirus crisis. The bank hired more than 2,000 new employees in March and announced a goal of raising its minium hourly wages to $20 from $17 last year.

“This is a health-care, humanitarian crisis, not an economic crisis,” Moynihan told Barron’s.

The B. of A. CEO’s comments come as a record 6.6 million workers filed jobless claims last week, according to Labor Department data on Thursday. The surge in claims for unemployment benefits exceeds the 3.3 million in claims reported a week ago and, brings the level of those seeking benefits to levels not seen since the 2007-09 recession, highlighting the damage to the economy wrought by the viral outbreak.

Economists predict 25 million Americans or more could lose their jobs in the next few months, at least temporarily, numbers that would far exceed records hit during the apex of the 2008 financial crisis and subsequent recession.

B. of A.’s efforts to aid employees and other stakeholders coincides with efforts by other banks to help alleviate the recessionary atmosphere. Two weeks ago, JPMorgan Chase JPM, +3.73% said it would give “front line employees, those who work bank branches and call centers through a one-time $1,000 bonus, amid the pandemic.

A number of banks, including J.P. Morgan and B. of A., have had to close branches or reduce hours in order to promote social-distancing efforts intended to slow down the spread of COVID-19 which was first identified in Wuhan, China in December and has now spread to more than 1 million people world-wide, killing about 50,000 people, according to data compiled by Johns Hopkins University.

B. of A. shares BAC, +4.05% ended Thursday trade up 4.1%, but are down nearly 42% year to date, underperforming the broader financial sector and the market as whole, as worries about a recession delivers an outsize hit to the banking sector which also tends to perform poorly in a low-interest rate environment.