Home
Stocks
Dispatches from a Pandemic: ‘Getting out of the water is not an option:’ A long-distance swimmer’s advice for enduring social isolation during the coronavirus pandemic
Prev Article Next Article

Gosport, U.K. — As a long-distance swimmer, I love a challenge. Last August, I swam the Catalina Channel from Santa Catalina Island to Long Beach, Calif., a 21-mile stretch of water that’s home to great white sharks. In a bid to dodge the strong winds that build in the afternoon, I started at 11 p.m. and my body burned with adrenaline as I climbed into the inky black Pacific Ocean to swim alone though the night.

As I lowered myself down my pilot boat’s metal ladder, I knew I’d have eight hours before first light. I didn’t know how long it’d take. I’d just keep swimming until I got there.

As we face an indeterminate period of isolation, I’m drawing on the resilience and experience I’ve gained by taking on challenges like my Catalina Channel swim, which took 18 hours and 31 minutes to complete.

I swim in a regular swimsuit, cap and goggles under international marathon swimming rules. Nobody is allowed to touch me during the swim, and any contact would result in my disqualification. Half-hourly feeds to sustain my energy are passed to me in a telescopic net — to avoid accidental contact — as are painkillers to mask the searing pain in my shoulders after tens of thousands of strokes.

It’s just me, the ocean and hour after hour of monotonous swimming, with the cold biting to the bone and pushing me to the edge of consciousness.

Getting out of the water is not an option. I take it off the menu before I get in, eliminating the mental turmoil of deciding whether to carry on when it feels unbearable. It’s all about endurance, the ability to withstand adversity. It’s a sphere in which dogged determination often trumps self-preservation.

As we face an indeterminate period of isolation to contain the spread of COVID-19, I’m drawing on the resilience and experience I’ve gained by taking on challenges like my Catalina Channel swim, which took 18 hours and 31 minutes to complete.

In a televised address to the nation on March 23, British Prime Minister Boris Johnson announced that we must all stay at home for at least three weeks. We’re only permitted to leave home to buy essential supplies or medication, to take care of a vulnerable person, to exercise outdoors once a day or to go to work, but only if it’s impossible to do so from home. 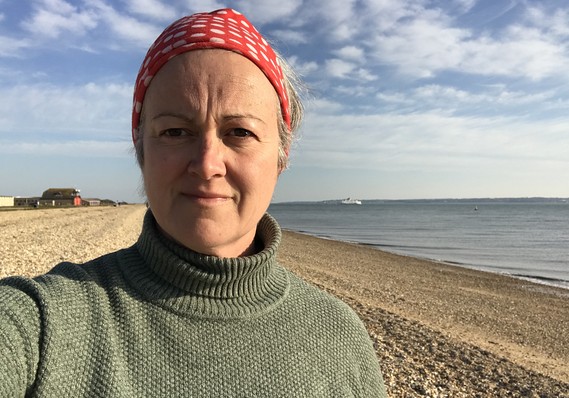 ‘As a long-distance swimmer, I love a challenge,’ Anna Wardley says.

There was a sense of relief that the British government had finally introduced definitive measures to control the spread of the virus, after crowds of people gathered at parks and beaches last weekend to soak up the long-awaited spring sunshine after a miserable, wet winter. It seemed that self-interest was winning over collective responsibility, fueled by confused messaging over what people should be doing to contain COVID-19.

Eventually, Johnson was left with little choice but to act decisively as the number of infections continued to rise and the National Health Service faced being overwhelmed. The U.K. had 29,865 confirmed cases and 2,357 deaths as of early Thursday, John Hopkins University said. Hampshire, the southern county with a population of 1.4 million where I live, had 652 confirmed cases, according to data compiled by Public Health England.

I only ever focus on swimming to the next feed, and then the next, until I eventually reach the end. I don’t wear a watch, and my support crew are briefed not to tell me how far there is to go.

It has become clear that the current measures may well be extended, so we’re all in uncharted territory, trying to adjust to a new reality with no idea how long we’ll be cooped up. And as an endurance swimmer, I have some advice as we enter this unprecedented period of confinement.

First, don’t become overwhelmed by the magnitude of what lies ahead. Stop thinking about the weeks and months to come, and just focus on how you will organize yourself today and for the rest of the week. I never allow myself to think about the entire distance when I start a long swim. If I did, I would be paralyzed by the enormity of it.

I only ever focus on swimming to the next feed, and then the next, until I eventually reach the end. I don’t wear a watch, and my support crew are briefed not to tell me how far there is to go. It’s irrelevant — I just swim until I get there. We have no idea how long these measures restricting our freedoms will be in place, but one day at a time, we’ll get there.

Stay positive, as your mindset will determine how you cope. Reframe confinement as an opportunity to reconnect with family, sort out the loft or pick up a mothballed creative project. While I swim, I make mental lists of everything I’m grateful for to keep fear and self-doubt at bay. Negative thoughts can quickly spiral and impact your overall well-being, so steer clear of news and social media if they derail you. 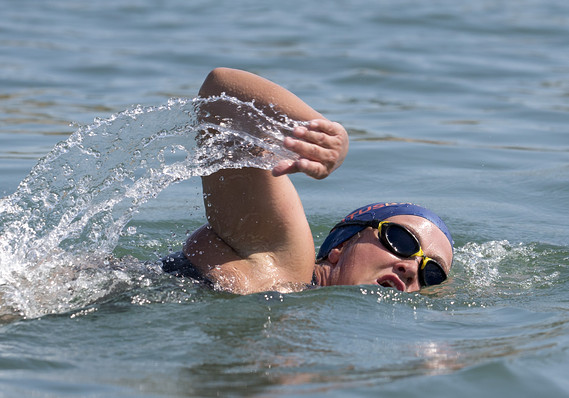 Anna Wardley: ‘Stay positive, as your mindset will determine how you cope.’

I’m self-employed and expecting my first baby in September. On Saturday, I entered the period when my income would be assessed to calculate the maternity pay I’ll be entitled to after my child is born. This is supremely bad timing, as all my work as an open-water swim coach and motivational speaker has been canceled due to the pandemic. This puts me in a precarious position financially as I count down to one of the few things that can’t be canceled or postponed in the current climate: the arrival of my baby.

Last month, the U.K. government’s chief medical adviser, Chris Whitty, announced that pregnant women were deemed vulnerable, which meant I needed to avoid all non-essential contact for 12 weeks. (The Royal College of Obstetricians and Gynecologists notes that “as yet, there is no evidence that pregnant women who get coronavirus are more at risk of serious complications than any other healthy individuals,” but says officials made their decision as a precaution.)

In 2013, I became the fourth person to complete a 56-mile nonstop swim around the Isle of Wight off the south coast of England, a feat that took 26 hours and 33 minutes. Toward the end, I had to swim against the tide.

Although a bombshell at the time, Whitty’s advice was quickly followed by the new restrictions on movement and social contact that applied to everybody. The upshot is that I’ll be spending much of the remainder of my pregnancy alone, confined to my home.

The good news is that my baby seems oblivious to all the mayhem that’s unfolding. I saw my midwife recently and we listened to a strong heartbeat. The maternity unit was being cleaned to within an inch of its life, and the only other mum-to-be in the waiting room arrived wearing two pairs of latex gloves. Who knows what sort of world our babies will be born into?

In 2013, I became the fourth person to complete a 56-mile nonstop swim around the Isle of Wight off the south coast of England, a feat that took 26 hours and 33 minutes. Toward the end, I had to swim against the tide. In the middle of the night, I was swept back two miles in a single hour. I kept pushing on despite this soul-crushing battle, knowing that the tide would turn. We will all have to push on over the next few weeks — until the tide turns on this pandemic.

Anna Wardley is an endurance swimmer, motivational speaker and open-water coach based in Gosport, U.K. You can find her on Twitter TWTR, -5.05%  at @annawardley.

This essay is part of a MarketWatch series, ‘Dispatches from a pandemic.’

Voices from around the world.