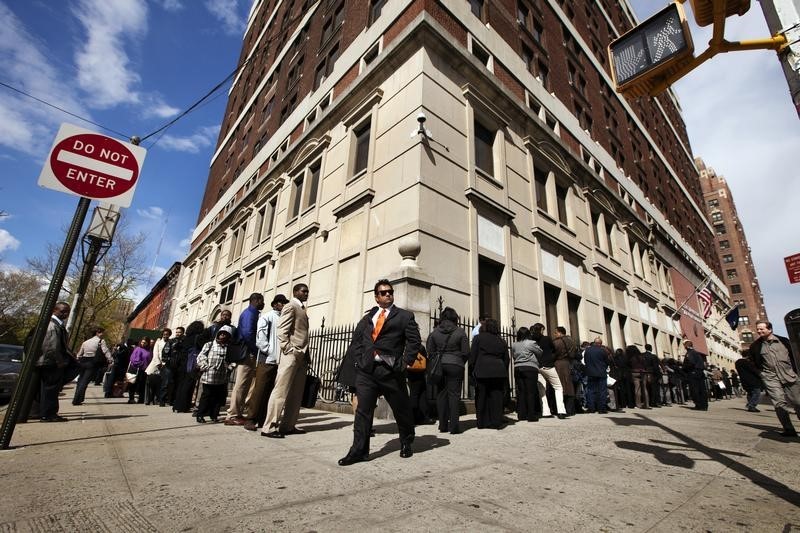 Investing.com – Wall Street ended up solidly in the green today, but it took an unprecedented rise in oil prices to lift it out of its uncertainty.

Energy stocks led the broader market higher after oil posted its best one-day on hopes (fueled by a tweet from President Donald Trump) that Saudi Arabia and Russia could put differences aside and slash crude output to the bone.

Oil’s unprecedented gains outweighed the unprecedented surge in weekly jobless claims. But there is more employment data to come Friday.

In addition, investors will be anxious for some more specificity about possible oil production cuts and the latest services numbers arrive.

The market will still watch it very closely, while acknowledging that the numbers will give the picture of an economy far from where we are now.

The jobs report survey was from the week of March 12, before any major U.S. state had gone into lockdown.

For that reason, economists are expecting a drop in nonfarm payrolls of just 100,000, according to forecasts compiled by Investing.com. And we know 6.6 million people filed for first-time unemployment benefits last week.

The unemployment rate is seen rising to 3.8% from 3.5% and average hourly earnings are expected to have climbed 0.2%.

Beyond the headline numbers, the main thing to look out should be the measure of those who became part-time workers for economic reasons, Martha Gimbel, economist at Schmidt Futures, tweeted.

“Given how uncertain everything felt in early March (oh so long ago), it’s plausible that employers cut hours and there was a jump in involuntary part-time work,” Gimbel said.

Goldman Sachs (NYSE:GS) said earlier this week it expects the second-quarter jobless rate to come in at 13.2%, rising to 15% by midyear, Bloomberg reported.

Oil came out of the blue to usurp the trading day (somewhat) from Covid-19. All it took was Trump tweeting his expectation of production cuts to send prices rocketing higher.

Crude has been beaten down so much it’s not surprising those expectations led to a spike. But as is often the case with policy-by-tweet, investors and traders are now left to look for specifics.

If production cuts do happen then will come after the OPEC+ meeting Saudi Arabia has requested. Any details on the specifics of a date and time could keep the bulls satisfied.

Saudi Arabia is willing to bring its production down to around 9 million bpd, but called Trump’s expectation of cuts of 10 million to 15 million barrels per day “exaggerated”, The Wall Street Journal reported.

Russia isn’t saying much, but any official word from them could be a market-mover as well.

The last batch of economic data for the week comes shortly after the opening bell when the Institute of Supply Management issues its services purchasing manager’s index (PMI) for March.

The measure of services activity, already weighted more by Wall Street than manufacturing given its greater share of GDP, has taken on new significance as the better gauge for the Covid-19-hit economy, with almost all restaurants and stores shuttered.

The index comes out at 10:00 AM ET (14:00 GMT) and is expected to drop well into contraction territory from previous measure of solid expansion.

The ISM non-manufacturing PMI is expected to fall to 44 for March from 57.3 in February, according to economists’ forecasts compiled by Investing.com.

Given the recent numbers, a bigger drop wouldn’t be a surprise. But it should be noted that the record low for the index since its inception in 1997 is 37.3 in March 2008, the heart of the Financial Crisis.