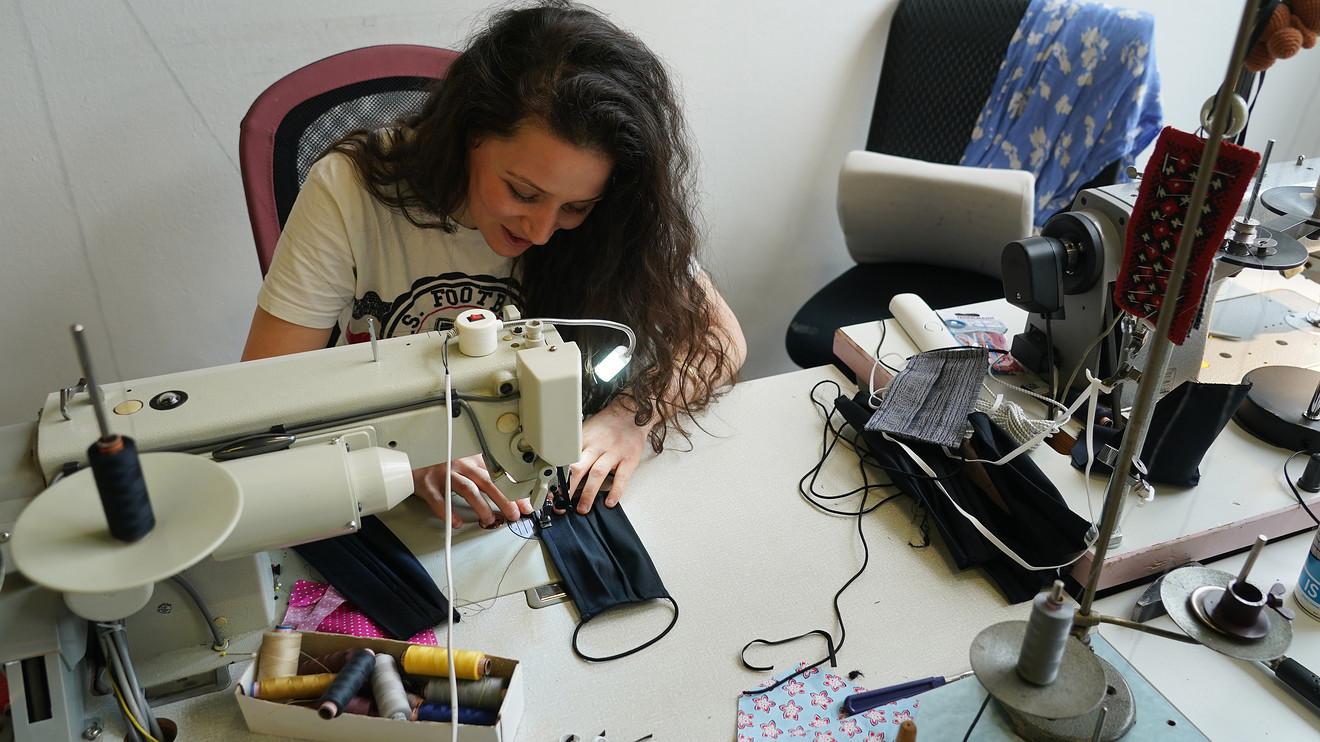 The number of global cases of the coronavirus that causes COVID-19 edged closer to the 1 million mark on Thursday as U.S. jobless claims soared to record levels, offering a grim look at how the illness is hurting businesses, individuals and the economy.

President Donald Trump admitted that the nation’s stockpile of protective equipment is almost exhausted, including respiratory masks, gloves and gowns. Trump said he is urging states to order their own supplies directly from manufacturers, but as New York Gov. Andrew Cuomo has said, states are competing with each other, and even with the Federal Emergency Management Agency, or FEMA, for essentials including ventilators and are being forced to tap suppliers from China, as that country is the biggest maker of medical supplies in the world.

Trump started a task force briefing Wednesday by introducing Attorney General William Barr and Secretary of Defense Mark Esper and said the U.S. is sending navy ships to Venezuela to counter the threat from drug cartels. Trump said the U.S. “must not let the drug cartels exploit the [coronavirus] pandemic to threaten American lives.” The move surprised many, coming as U.S. virus numbers continue to grow rapidly.

There are now 216,768 cases of COVID-19 in the U.S. and 5,148 people have died, according to data aggregated by Center for Systems Science and Engineering at Johns Hopkins University. The U.S. leads the world in number of cases with New York state the epicenter. There are 88,082 cases in the Empire State as of Thursday and 2,373 deaths, according to Cuomo and the state health department. New York City is worst hit with at least 47,439 cases.

Dr. Anthony Fauci, the New York-born infectious disease expert who is a key member of the Task Force created to handle the pandemic, has been given a security detail after receiving threats, the Wall Street Journal reported, citing an official familiar with the matter. Fauci’s straight-talking style, and contradiction of some of Trump’s inaccurate claims about the virus, has won him fans and detractors. A request for nine special agents was approved by the Justice Department following a recommendation from the U.S. Marshals Service, the official said.

Fauci said the virus might keep coming back and that the ultimate weapon to fight it is a vaccine. That may not be possible for another year to a year and a half, he said, although experts have said that timeline is too aggressive. As for measures like social distancing, Fauci said those could be eased as soon as the illness curve has moved to the point where there are no new cases and no deaths for a period. “he one thing we hope to have in place, and I believe we will have in place, is a much more robust system to be able to identify someone who is infected, isolate them, and then do contact tracing,” he said at the briefing.

U.S. jobless claims rose by a record 6.6 million in the week to March 28, bringing the two-week total to 10 million. Thousands of workers have been impacted as companies have been forced to shutter plants, outlets, offices and other facilities to combat the spread of the virus. Retailers and airlines have furloughed most of their employees, sending claims past the peak number of people who collected benefits during the 2007 to 2009 so-called Great Recession. Economists predict 25 million Americans or more could lose their jobs in the next few months, at least temporarily.

Bank of America economists said the jobless rate could surge to as high as 15.6% in a few months from 3.5% as of February, far exceeding the rate seen in 2007 to 2009. the B. of A. team is forecasting three consecutive quarters of contraction in gross domestic product, “with the US economy shrinking 7% (annualized) in 1Q, 30% in 2Q and 1% in 3Q.”

On the bright side, the economists estimate that the fourth quarter of 2020 will see a sizable pop in business activity as the measures put in place to slow the deadly contagion are slowly unwound.

Against that background, companies continue to announce cost cutting, the tapping of emergency credit lines and furloughing of staff on Thursday and more withdrew previously-issued guidance. On the medical front, Amgen Inc. became the latest biotech to say it is working on a COVID-19 treatment. Amgen is working with Adaptive Biotechnologies Corp. ADPT, +1.45% to discover and develop antibodies that can be used to prevent or treat the illness, using Adaptive’s viral-neutralizing antibody platform to speed up the process.

Don’t miss: Class of 2020 was to enter the strongest job market in 50 years — and now graduates’ earnings will lag behind peers’ for a decade

Here’s what companies are saying about COVID-19 on Thursday:

• Boeing Co. BA, -1.73% is offering buyout and early retirement packages to employees as the virus grounds airlines around the world and decreased demand for new planes, according to media reports Thursday. The aerospace giant announced the plan in a memo to employees from Chief Executive Dave Calhoun, according to CNBC. “It’s important we start adjusting to our new reality now,” he wrote, said the CNBC report. Boeing has about 151,000 employees, roughly half of whom are based around Seattle’s Puget Sound region.

• Boston Scientific Corp. BSX, +3.35% expects first-quarter revenue growth to be flat to up slightly versus the year-earlier period, after the pandemic caused many elective procedures to be delayed. The company said business trends were in line with expectations in January and February but took a downturn in March. The company is reining in costs, cutting the salaries of its CEO, board and executive committee members and temporarily cutting hours. The company is working with the University of Minnesota Bakken Medical Device Center to bring a ventilator alternative to market. It is making face shields at three of its U.S. plants and working to develop a reusable personal respirator.

See: Should all Americans be wearing face masks to protect against coronavirus? Trump, Fauci are closer to saying yes

• Brinker International Inc.’s EAT, -5.66% third-quarter same-store sales at company-owned restaurants fell 5.9% as a result of the outbreak. For the quarter, same-store sales sank 5.3% at Chili’s and plummeted 9.9% at Maggiano’s. Brinker has cut capital expenditures and marketing spend, amended its credit facility to allow for $800 million in borrowing and reduced salaries. Chief Executive Wyman Roberts has taken a 50% pay cut. Brinker has withdrawn its fiscal 2020 guidance, and says it had total liquidity of $237 million as of March 31, $137 million in cash.

• Carnival Corp. CCL, -7.67%  secured a massive rescue financing package, the biggest slice of which is a $4 billion senior secured bond offering that gives investors an 11.5% coupon, yielding near 12% yield on debt that matures in 2023. Initially, the company pitched a smaller $3 billion senior bond offering at coupon of about 12.5%, but was able to get slightly more favorable terms from creditors even as Carnival and others battle a world-wide slump in travel.

• MarineMax Inc. HZO, -6.43%  warned of a fiscal second-quarter revenue shortfall, as the recreational boat and yacht retailer is feeling the effects of the pandemic. The company is working with manufacturers to adjust futures orders, has temporarily closed departments or stores, although “many” of its 59 store remain fully or partially operational; is furloughing employees, as it cuts operating costs and delays or reduces capital expenditures; reducing orders from manufacturers; working to “extract capital” from its real estate holdings, which had a net book value of $123 million as of Sept. 30, 2019; and looking to monetize inventory, which was approximately $100 million on Dec. 31. The company withdrew its 2020 financial guidance.

• Marriott Vacations Worldwide Corp. VAC, +7.30%  has amended its non-recourse warehouse credit facility to expand its borrowing capacity to $531 million, up by $181 million. Under the terms of the agreement, the termination date for the existing $350 million warehouse facility remains Dec. 2021, with the additional capacity terminating on March 31, 2021. The interest rate on the warehouse facility is Libor plus 1.4%. The company has more than $310 million of borrowing capacity following the amendment.

• Ross Stores Inc. R, -2.56%  will furlough most of its store and distribution center associates starting April 5. Ross Dress for Less and DD’s Discount locations have been closed since March 20 and will now be closed indefinitely. Board Chairman Michael Balmuth and Chief Executive Barbara Rentler will forego their salaries with tiered salary reductions throughout the company.

• Shake Shack Inc.’s SHAK, +0.22%  same-restaurant sales tumbled 29% in March from a year ago, with the impact of the coronavirus outbreak becoming more acute as the month progressed. For the first two months of the quarter, same-Shack-sales were down about 2%, with declines starting to accelerate in early March. The company is expanding its delivery partners to include Postmates, DoorDash, Uber Eats and Caviar. Separately, the company said about 20% of its home-office employees have been furloughed or laid off, and “significant” reductions have been made in staff across all restaurants.

• TransDigm Group Inc. TDG, +3.89%  will cut its workforce by 15%, citing the disruption the COVID-19 pandemic has caused to the aerospace and travel industries. The aircraft parts maker had 18,300 employees as of Sept. 30, 2019, suggesting the cuts could impact 2,745 employees. The company said laid-off U.S. employees will receive a “substantial” lump sum payment based on their tenure, and an additional $4,000 to help with expenses associated with health care and job search. TransDigm will cut senior manager’s cash compensation and withdrew its guidance.