Coronavirus has overwhelmed swaths of New York City’s poorest neighborhoods, including the hardest hit area, which just so happens to be named Corona, Queens.

Playgrounds shuttered on the cusp of spring. Gas at its cheapest, but people can’t leave their homes. City schools closed just in time for standardized test (and prom) season. But the severity of the outbreak in Corona is a particularly cruel twist of fate. The ZIP Code, 11368, had 947 residents test positive as of Wednesday, according to a map of city health department data compiled by the Association for Neighborhood Housing & Development, an affordable housing advocacy group. 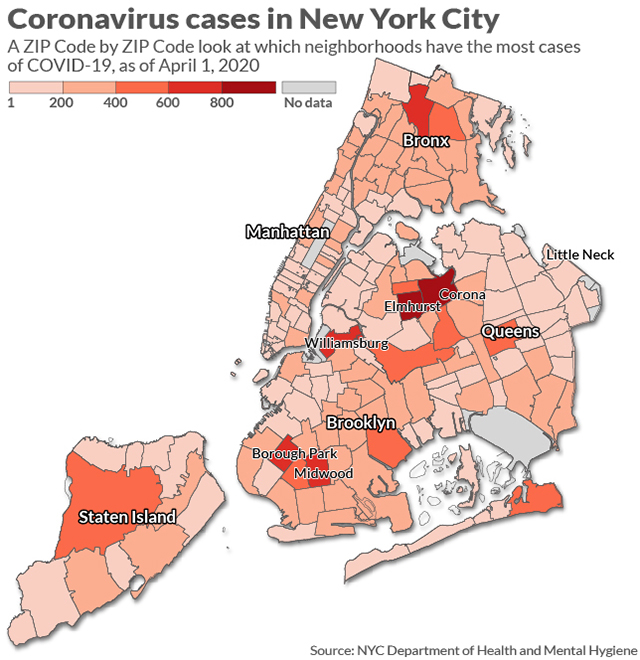 The new data from New York City, the epicenter of the disease in the U.S., confirms a pattern observed around the world, where the coronavirus has hit poorer neighborhoods particularly hard, as issues such as access to health care and housing density exacerbate its spread. As of Thursday morning, 45,707 people in the city had tested positive and 1,374 had died.

More general data had previously shown Queens to be the hardest hit part of the city, but the new granular, neighborhood-level data is important in pinpointing where resources and information are most needed to fight the virus and underscore the grave disparities in the crisis.

“Although it will be a while before we fully understand all of the aspects of epidemiology, we know that in Queens, many families, because of poverty, live together in very close quarters,” Dr. Mitchell Katz, president of New York City’s Health and Hospitals, said in a briefing with Mayor Bill de Blasio on Wednesday. “So that while we are practicing as a city, social distancing, you may have multiple families living in a very small apartment.”

The neighboring ZIP Code, which encompasses Elmhurst, Queens, and the city’s most overwhelmed health-care facility, Elmhurst Hospital, had the second biggest caseload, with 831 residents testing positive.

On the map provided by the city, a deep shade of violet indicating a high number of cases covers all of central Queens before hitting the more affluent stretch of communities bordering the East River and to the East by Nassau County. The ZIP Code including Little Neck, Queens, one of the borough’s wealthiest neighborhoods and one with mainly single-family homes, had only 27 positive cases.

Other hot spots include Brooklyn neighborhoods like Borough Park, Midwood and Williamsburg, and many parts of the Bronx.

Manhattan, by far the wealthiest region in the city, has the lightest infection rate of any borough with 376 infections per 100,000 people, according to the city’s health department. Affluent neighborhoods around Central Park and in trendy lower Manhattan have fewer cases than the poorer, minority communities in upper Manhattan.

Population density, including the number of people living in a household, is at the core of why New York City has become the nation’s epicenter, Dr. Jessica Justman, associate professor of medicine in epidemiology and ICAP at Columbia Mailman School of Public Health told MarketWatch last week. It also explains why parts of the city have been hit with varying severity.

“This is a reflection of wealth and poverty,” Justman said last week. “Queens has a large population of immigrants and, compared to U.S.-born citizens. Immigrants tend to have less money and live with many others in smaller apartments.”

Gov. Andrew Cuomo on Thursday expressed concern that the disease was quickly spreading in the New York City suburbs of Long Island. There were 10,597 cases in Nassau County, which directly borders Queens, as of Thursday morning, a 10% increase since Wednesday. The rate of infection in that county has now climbed to roughly 773 cases per 100,000 residents, higher than any borough in New York City.

Suffolk County, at the far eastern tip of Long Island, had more than 8,700 cases, an increase of 1,141 since Wednesday.

“We said it was going to walk across this state,” Cuomo said, adding that it’s a false sense of comfort to think rural or suburban communities outside New York City are immune.

Meanwhile, the state continues to search for supplies and manpower to prepare for the peak, when hospitalizations are expected to inundate hospitals. Models predicting the course of the disease show the apex is anywhere from seven to 30 days away, Cuomo said on Thursday.

The state’s stockpile of ventilators, a piece of lifesaving medical equipment, will run out in six days, when it will have to turn to other means, such as splitting ventilators among multiple patients and hooking them up to anesthesia machines converted into makeshift ventilators, Cuomo said.

“We are literally planning on a day-to-day basis,” he said.